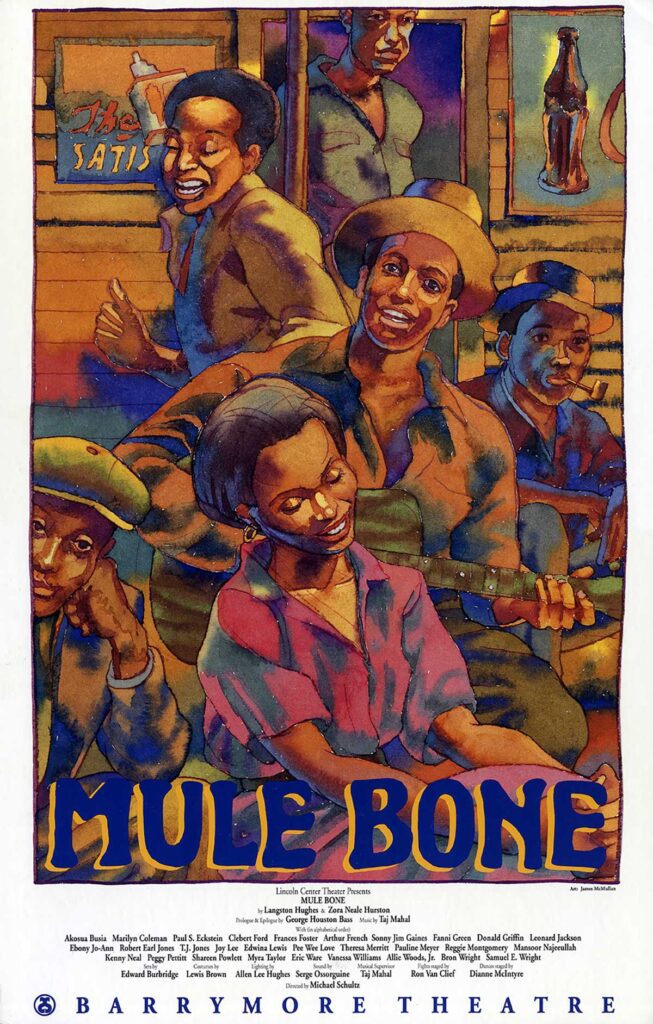 Due to an acrimonious falling out between Hughes and Hurston, it took six decades for this play about African American life in ’20s rural Florida to finally get its world premiere.

“Mule Bone: A Comedy of Negro Life is a 1930 play by American authors Langston Hughes and Zora Neale Hurston. The process of writing the play led Hughes and Hurston, who had been close friends, to sever their relationship. Mule Bone was not staged until 1991, when it was produced in New York City by the Lincoln Center Theater.

Hughes and Hurston began writing Mule Bone in March 1930. They wanted to write a comedy about African-American life that didn’t consist of racial stereotypes. They decided to base the plot on a folktale which Hurston had collected in Florida during one of her anthropological field trips. The two writers dictated their work to Louise Thompson, who typed it.

Their work was almost complete in June, when Hurston went away for the summer. She took her notes and said she would return in the fall, and they could finish the play. When Hurston came back, she would not return telephone calls from Hughes. She felt he wanted Thompson to be considered a third collaborator in the project, a proposal to which she strongly objected.

Hurston submitted Mule Bone for copyright in October 1930, listing herself as the only author. In January 1931, Hughes learned that a copy of Mule Bone, bearing only Hurston’s name, had been sent to the Gilpin Players, an all-black theater company in Cleveland, for their consideration. Hurston told Hughes that she had not sent them the play, which was true, but Hughes was furious. Hurston had sent Mule Bone to Carl Van Vechten, who sent it on to the Gilpin Players without her knowledge. Hughes sent a copy to apply for copyright under both their names.

In the meantime, the Gilpin Players wanted to stage the play. The work was still somewhat rough, but Hughes was in Cleveland, and he offered to help rewrite portions of the play. Hurston sent a telegram advising that she refused to allow the production. A day later, she sent another telegram authorizing the production on the condition that she be allowed to work with Hughes on changes. That same day, Hughes received a letter from Hurston saying that no part of the play had been written by him.

In light of all the off-stage drama, the Gilpin Players decided not to proceed with their production.” (Wikipedia)