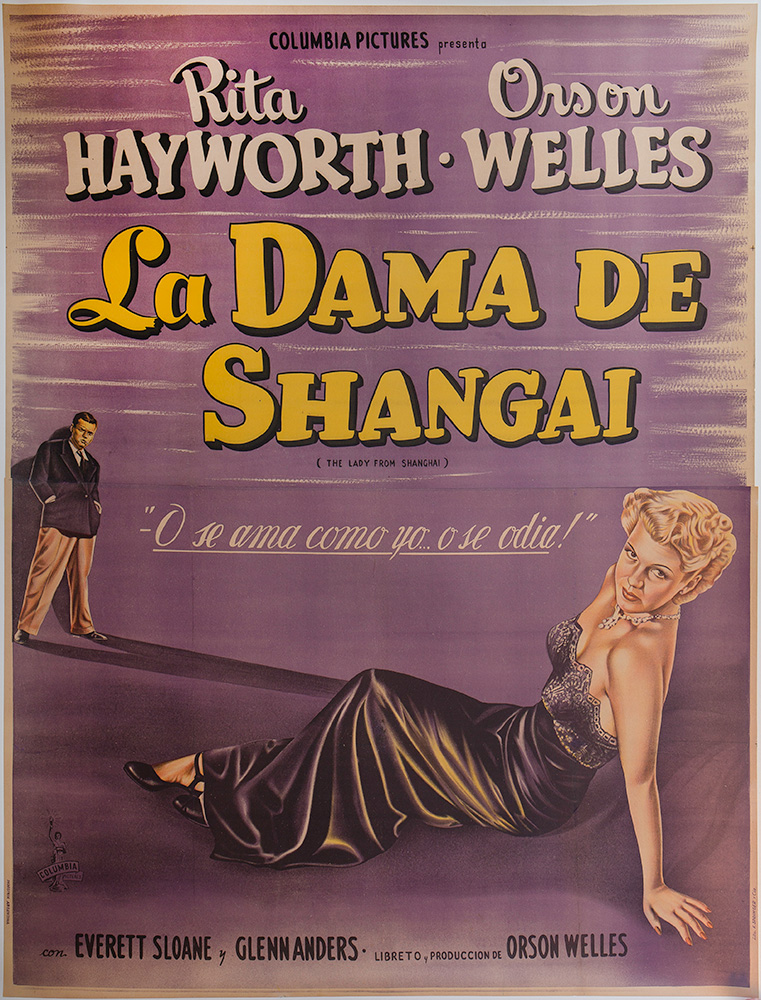 THE LADY FROM SHANGHAI ARGENTINE POSTER (1947)

Vintage original 42 x 56” (105 x 140 cm.) poster, Argentina. Rita Hayworth, Orson Welles, Everett Sloane, Glen Anders, Ted de Corsia, dir: Orson Welles; Columbia. One of the best remembered of the film noir genre. Orson Welles and Rita Hayworth were married at the time, and though Rita was not the first choice for the film, initially production Chief Harry Cohn wanted to capitalize on the couple. He regretted that decision once he saw what Orson had done with her. The controversy began while it was being filmed due to Orson Welles controlling ways and for his insistence that Hayworth cut and dye her famous red tresses. The film, based on Sherwood King’s novel IF I DIE BEFORE I WAKE was made only because Welles was in financial trouble while producing a musical stage version of AROUND THE WORLD IN 80 DAYS. The creditors were about to pull the sets and costumes on opening night in Boston if he did not pay the bill. He asked studio head Harry Cohn to buy the property and he guaranteed that he would give his services as actor, director and writer if Cohn would bail out the monies needed to allow the show to open. Orson delivered a film that ran 155 minutes. Though beautifully photographed (locations in Mexico), Cohn was not pleased. It was cut to 87 minutes, glamour close-ups and a song added for Hayworth (for which she was dubbed) and the release held for a year. Errol Flynn’s yacht was used for the location filming and Flynn served as a technical advisor and appears in the background of some shots. Today the film is appreciated for its’ moodiness, romance and photography— and for the legendary scene if the funhouse of mirrors. Poster is beautifully conserved on linen with very minimal touch up at fold lines and very minor edge tears repaired. Fantastic colors and a very Dali-esque presentation. ABOUT FINE.