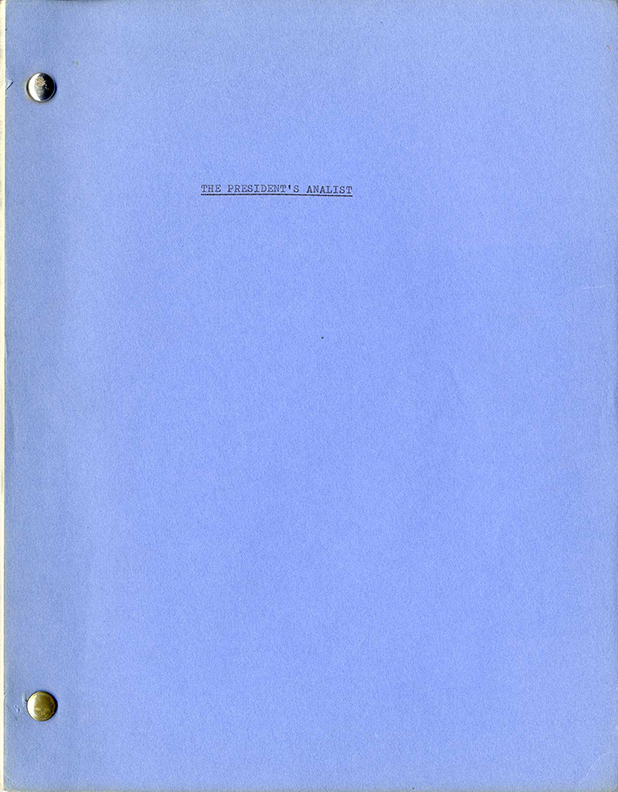 Theodore J. Flicker (screenwriter and director)  THE PRESIDENT’S ANALYST  SHOOTING SCRIPT-GENERAL DISTRIBUTION  Vintage original film script, printed wrappers, brad bound, quarto, mimeograph, 112 pp.  Title labeled in ink on spine, wrappers lightly creased, just about fine.
Theodore Jonas Flicker (1930-2014) had already co-written two films (including Elvis Presley’s SPINOUT, 1966) and directed one (THE TROUBLEMAKER, 1964) when he was given the opportunity to direct THE PRESIDENT’S ANALYST, a film that would later become a cult classic.  Flicker had shown his original screenplay of THE PRESIDENT’S ANALYST to actor James Coburn at a Hollywood Christmas party.  Coburn, in turn, showed the screenplay to Robert Evans, then the head of Paramount Pictures, who green-lit the project with Coburn playing the title role. Flicker would go on to direct several more films – none of them as well known as THE PRESIDENT’S ANALYST – and numerous television episodes, eventually achieving another career success as the creator of the TV series, BARNEY MILLER.
The screenplay begins with the following title card:

NEVERTHELESS THE PRODUCERS WISH TO THANK THESE ORGANIZATIONS WITHOUT WHOSE ACTIVITIES THIS STORY WOULD NOT HAVE BEEN POSSIBLE.
The movie begins with a slightly edited version of the title card above in which “FBI” has been changed to “FBR” and “CIA” has been changed to “CEA” – the FBR (Federal Bureau of Regulation) and the CEA (Central Enquiries Agency) being Flicker’s names for the two American spy organizations who superintend and pursue Coburn’s character, Dr. Sidney Schaefer, throughout the course of this film.  (The KGB is still referred to as the KGB.)
Dr. Schaefer is a psychoanalyst, and the story’s premise is that Dr. Schaefer is tapped to become the analyst of the President of the United States, as a result of which he becomes a person of interest to every spy organization on the planet, each of whom hopes to learn the secrets to which Dr. Schaefer is privy by virtue of his doctor/patient relationship.  From a 21st Century perspective, Flicker’s screenplay is a satire whose principal target is what we now call the “surveillance state.”
Surprisingly, we never see or hear the President in this movie.  Since the film was made in 1967, we can assume the President referred to is Lyndon Baines Johnson who was President at that time.  That assumption is supported in  some of the dialogue spoken by a gun-toting “liberal” suburban couple (William Daniels and future director, Joan Darling) met by Dr. Schaefer, who assume the President would like them because they’re “for Civil rights.”
Liberals and hippies are two of the screenplay’s chief satirical targets.  Yet this is a film that was embraced by the counter-culture of its day, due largely to its irreverent attitude and its hipster cast, Coburn in the lead, black comedian Godfrey Cambridge as a CEA assassin, and Second City alumnus Severn Darden as Cambridge’s opposite number, a lethal KGB agent.  One of the story’s ironies is that Cambridge’s and Darden’s characters, though working for opposing teams, are actually the best of friends.
Cambridge’s character also figures in the screenplay’s biggest serious moment, a monologue on the psychoanalyst’s couch, delivered movingly by Cambridge, in which he describes the traumatic moment in his childhood when he first learned the meaning of the word “n*gg*r” – “He told me what a n*gg*r was.  And I was it.”
Dr. Schaefer eventually cracks under the pressure of being the president’s analyst, turning paranoid and going on the run – at which point every spy in the world, even the Canadians, attempts to capture or kill him.  Ultimately, he is abducted by the most sinister surveillance organization of them all, the TPC (The Phone Company).
Some of the screenplay’s satirical scenes were cut in the transition from script to screen, for example, a sequence where Dr. Schaeffer meets his girlfriend, Nan, at a New York showing of an “underground movie.”  In the completed film, Dr. Schaefer’s relationship with Nan is simply a given.
Apparently Coburn was already secured for the lead when this draft was written, because it sometimes refers to him by name:  “Now we are CLOSE on Sidney. . . . His walking pace increases (and with the length of Jim Coburn’s stride, it will take a reasonably fast car to keep up with him).”
Incorporating everything from the kitchen sink to LSD-fueled psychedelic love-ins, THE PRESIDENT’S ANALYST screenplay is very much a reflection of the era in which it was conceived.