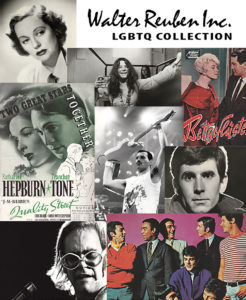 WalterFilm.com has been a resource for those collecting LGBTQ related material long before the LGBTQ designation came into use. LGBTQ stands for a culture shared by Lesbian, Gay, Bisexual Transgender, Questioning and Queer individuals. This term has only come into common usage recently and was brought about as a result of the Stonewall Riot in June of 1969, which, along with the AIDS epidemic that followed, came to be known as the Gay Pride Revolution. As a result, there has been a growing interest in LGBTQ social history as is detailed in the Queer History Social Media Project of the Society of American Archivists.

The queer history social media project is an initiative aimed at bringing the skills and insights of professional archivists, librarians, historians, and other social scientists involved in the study of LGBTQ history to bear in the improvement and enrichment of articles on topics, individuals, and organizations related to THE LGBTQ experience throughout history.

The sales continued to be made to an ever-growing number of institutions and individuals and, as a result, Walter Reuben Inc. has grown to become a major resource for LGBTQ Cultural History and Memorabilia.

An example of the range of LGBTQ material that is provided by Walter Reuben Inc., through its catalogs, and WalterFilm.com, on its website, can be found in the summaries of our 2018 and 2019 catalogs:

A substantial archive on LGBTQ film, stage, and music history, with 42 vintage scripts, 1200+ photos, and 45 pressbooks, promotional books, and other ephemeral promotional items, making for overall more than 1300 pieces.

Numerous individual films and plays with LGBTQ subject matter are also included, among them the theater script for THE ROCKY HORROR SHOW, KISS OF THE SPIDER WOMAN, THE FOX, and LAST EXIT TO BROOKLYN.

A remarkable collection of 33 posters for Manhattan’s The Saint, created for various special events covering 1982-2004. While open, it was one of the premiere gay dance clubs in the world, after which it hosted pop up events. The artwork runs from the explicitly sexual to the romantic. Most of these posters were created during the era of the AIDS crisis.

This collection offers a range of material including photographs – GLENN OR GLENDA, Kenneth Anger, a press book – DESIGN FOR LIVING, paper doll cut out – Rock Hudson, posters – THE BITCHES, AS IS, film scripts – MYRA BRECKEN

Here are two of our offerings: Program for the British release of FLESH delayed 3 years due to censorship – A 1998 book store poster for the first book about Andy Warhol’s FLESH superstar entitled Little Joe Superstar – The Films of Joe Dallesandro.

A number of photographs, posters, promotional books and a screenplay that reflect the LGBTQ community: A poster by super-hero artist, Borris Vallejo, for the “New St. Marks Baths” – A 1927 photograph of Karyl Norman (stage name for Frances Peduzzi) a transgendered performer (then referred to as a female impersonator), popular in vaudeville and night clubs under the moniker “the Creole Fashion Plate.”

Everything that is shown in the catalogs can be found on our website, if available. Please visit our LGBTQ Collection at WalterFilm.com and see the extraordinary range and quality of the LGBTQ material we offer.

As experienced and knowledgeable Curators, we take great pride and pleasure in helping our clients discover the extraordinary range of material that comprises LGBTQ Social History and Memorabilia –– something they find beautiful, engaging or relates to who they are or what they care about. This is regardless of whether they are purchasing a single object or developing a fabulous collection.

We would be happy to do the same for you. Therefore, don’t hesitate to Contact Us if we can be of any assistance.