Since 1982, WalterFilm’s focus has been on both international and Hollywood movie memorabilia that touches on the history of motion pictures as well as objects that were part of the movie making process. 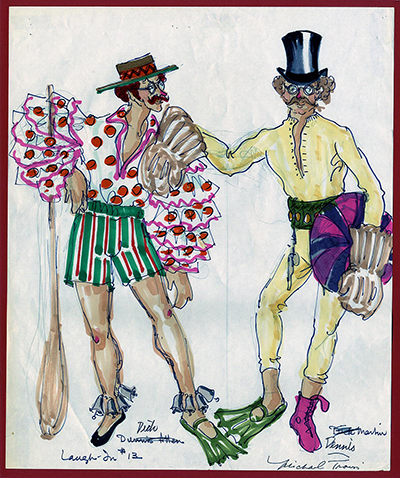 Sketch art renderings of proposed costumes for each character are executed by each film’s costume designer (or in some cases, the sketch artist for the designer.) Very often, dozens of sketches are made, some which become built costumes, and many which do not. This is all part of the creative process of motion picture making.

The designer studies each script and comes up with a wardrobe plot for each character and the sketches are shown to the director, producer and the relevant star. Once approved, the costume is built, fitted and tested on the actor and photographed. Using an art board or heavy paper, these sketches are often accomplished in gouache paint, pencil and ink. They are usually signed by the designer and, if the costume is then made, swatches of the fabric are sometimes attached, and the verso can, on occasion, include production information and costs. Most designers executed their own designs, including Adrian, Travilla, Helen Rose, Irene Sharaff, Walter Plunkett, Dolly Tree, Anthea Sylbert and many others. The most prolific designer, Edith Head, used different sketch artists throughout her lengthy career, which is why the art of her design work varies in each period. We are pleased to often feature the original artwork of these talented designers.

Sketch art, concept drawings and paintings and blueprints, the pre-production art necessary before a set is built, all give us a fascinating look into the preliminary thoughts that went into a film. As the studios literally threw out this art when they found it necessary to sell off the old lots, little of it exists. In some cases, the designers took their files home with them, and other pieces were rescued from the trash bin.

The sketches and concepts provide us with the color palette and emotional intent the artists and director worked to achieve in their final product. The blueprints show us the detail of how that was achieved. Even today, when existing sets are often used, this design process is necessary in order to dress a set appropriate to meet the script requirements.

Though the great studios had their head set/art designers, such as Cedric Gibbons at MGM and Anton Grot at Warner Brothers, the unsung heroes here were often their staff of devoted sketch and blueprint artists, their work is fascinating when we find a piece to study. 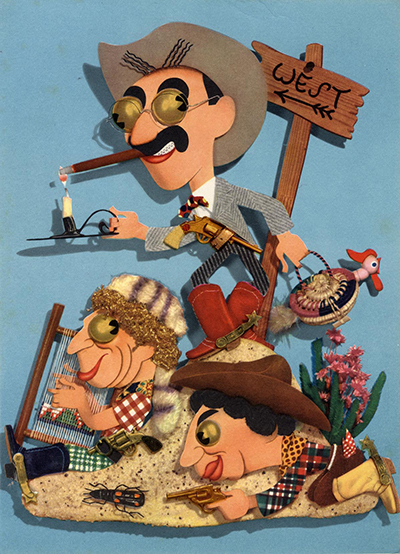 Unique promotional items created for in-house publications, magazine pull outs and theatre display are among the unusual items we offer. The unique caricatures of such artists as Hap Hadley, Jacques Kapralik and Al Hirschfeld are often featured on these pieces.

We occasionally handle a vintage costume and have placed several iconic pieces in museums and collections, including Veronica Lake’s signature Edith Head beaded gown for I WANTED WINGS and a Rene Hubert gown for Marlene Dietrich in FLAME OF NEW ORLEANS. Having an expertise in vintage costumes acquired while working in a studio costume archives we can always offer services of identification, and cataloging as well as consultation on restoration and archival preservation of historic costumes.

We do occasionally offer autographed items which have been vetted, usually having come from the collections of industry professionals. Inscribed oversize portrait photography, signed letters, documents and contracts are amongst the items we offer from time to time.

From time to time we offer unique animation related pieces. Warner Brothers character posters, unique art created for premier presentations of Disney films, photography of the behind the scenes process and an occasional animation drawing are all items to watch for.