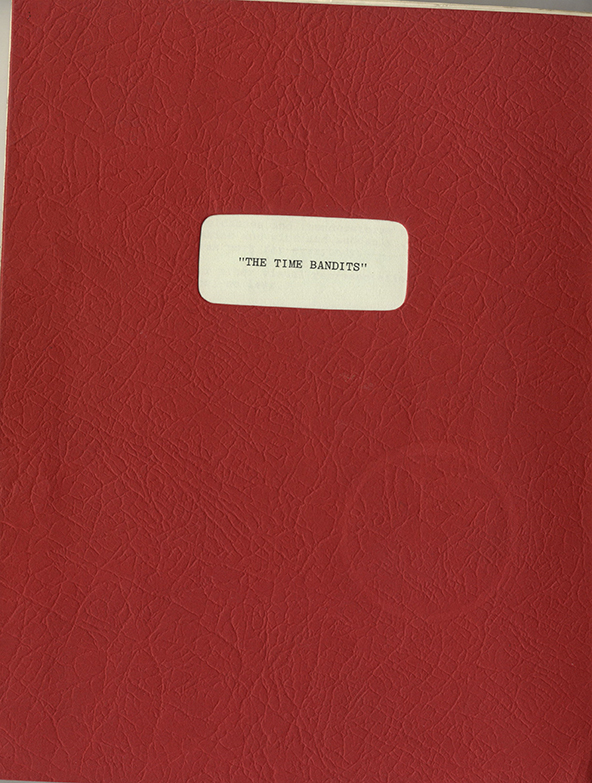 TIME BANDITS A Screenplay by Michael Palin and Terry Gilliam (1980)

London: Handmade Films, 1980 . Shooting script for the 1981 British fantasy/adventure film, Time Bandits, the third film to be directed by Terry Gilliam, based on an original screenplay by Gilliam and fellow Monty Python alumnus Michael Palin, with a cast that would be quite a bit more expensive today than it was then, including Palin, John Cleese, Sean Connery, Ian Holm, Ralph Richardson, and Shelley Duvall. Script belonging British character actor Derek Lamden, with his name in holograph pencil at the top of the title page.

Gilliam’s follow-up to Monty Python and the Holy Grail, a dark, irreverent comedy disguised as a family adventure, in which a young boy travels with a group of dwarves through time and encounters various historical figures, including an entertainment-starved Napoleon (Holm), a powerful Agamemnon (Connery), and a surprisingly stuffy Robin Hood (Cleese).

Red titled wrappers, with a windowed front panel. Title page present, with a date of April 1, 1980, and credits for Palin and Gilliam, along with a production company credit for “The Handmade Film Partnership,” a venture founded by George Harrison that soon became simply, “Handmade Films.” 135 leaves, photographically reproduced, with revision pages inserted throughout, all marked “Revision 14.4.80.” NEAR FINE (with a single ring impression–not a stain–on the front wrapper), bound with two silver brads. Nominated for 5 Saturn Awards and, 1 Hugo Award. An extremely scarce document for one of the most memorable achievements by the Python crew in the early days of their formidable post-television era.

This screenplay by Monty Python alumni, Terry Gilliam and Michael Palin, is titled THE TIME BANDITS. The released film was titled simply TIME BANDITS. The film, Gilliam’s second as a solo director (he codirected with Terry Jones the 1975 MONTY PYTHON AND THE HOLY GRAIL) was a huge hit in the United States ($42.4 million on a budget of $5 million) and established Gilliam as a major filmmaker. It was produced by the Beatles’ George Harrison through his company, HandMade Films.

TIME BANDITS, like nearly all of Gilliam’s films, combines the surreal British humor of Monty Python and the Goon Show with a Felliniesque flair for florid visual fantasy. It’s the story of a boy, Kevin, who becomes the unwitting companion of six apparently immortal (and amoral) dwarves who have stolen from the “Supreme Being” a map that shows all the holes in the fabric of the universe, holes which allow them to escape easily from one time period into another while being pursued simultaneously by the Supreme Being (Ralph Richardson) and his demonic counterpart, Evil (David Warner). In the screenplay, there is a seventh dwarf by the name of Horseflesh, who originally stole the map, but he does not appear in the completed film.

Palin and Gilliam’s 1980 screenplay is fairly close to the completed film. However, almost every sequence that Gilliam shot was embellished with additional verbal and visual gags, and bits of business.

For example, in the filmed version of the sequence that takes place in the age of Robin Hood, Hood (John Cleese) has a companion, not in the screenplay, by the name of Marian (as in Maid Marian) who is actually a rather ugly looking male thug. In both the screenplay and the movie, Hood and his gang redistribute their booty (taken from the dwarves!) to the poor, but in the movie every one of the poor who gets a gift also receives, as an added benefit, a punch in the face.

One sequence in the screenplay that was never shot – most likely for budgetary reasons – takes place in London in 2076. Gilliam and Palin describe their future London as “a grim, grey, metallic landscape of tubes, conduits, and rusty steel supports. This world looks much like a gas works.” Gilliam aficionados may recognize this as similar to the world depicted in Gilliam’s BRAZIL.

Gilliam is one of those screenwriters, who likes to throw in superfluous, more often than not humorous, comments on what he is writing. For example, when the Greek warrior Agamemnon is introduced:

Beginnings and endings are generally the parts of movies most likely to be altered between the writing of the screenplay and the execution of the completed film. This is certainly the case with the TIME BANDITS screenplay.

The screenplay begins with a one and half page voiceover monologue – beginning in darkness – that sets up the premise of the story:

It is the beginning of time. The Past has only just begun. Nothing exists save the Supreme Being himself.

And the Supreme Being decreed there should be light.

The film, on the other hand, opens with no voiceover or verbal explanation of any kind. The first image we see is the spread out Time Map – which dissolves into an image of actual galaxies and stars – from which we zoom into a planet that is recognizably our Earth – into which we zoom further until we see an overhead view of the suburban house where Kevin, our protagonist, lives.

Both screenplay and film end with a fantastic battle in the underworld between Good and Evil. During the course of this battle, Kevin’s idol, King Agamemnon (Sean Connery) is killed, though ultimately everything is resolved after the Supreme Being appears. Kevin happily returns home, but a bit of charcoal left over from the battle causes his dullard parents to vaporize!

The ending of the film is similar, but with a few significant changes. Agamemnon does not take part in the final battle and he is not killed. The leftover charcoal not only causes Kevin’s parents to vaporize, but burns down his entire house. Sean Connery reappears as a modern-day fireman who gives Kevin a sly wink.

KEVIN is looking back toward his house. He shakes his head sadly, turns around and begins the long walk to school, education and a better world for all mankind freed from the repressions of a parentocracy obsessed with materialism and not even dialectical materialism at that.

And the end credits roll accompanied (in both screenplay and film) by the marching song of the dwarves.