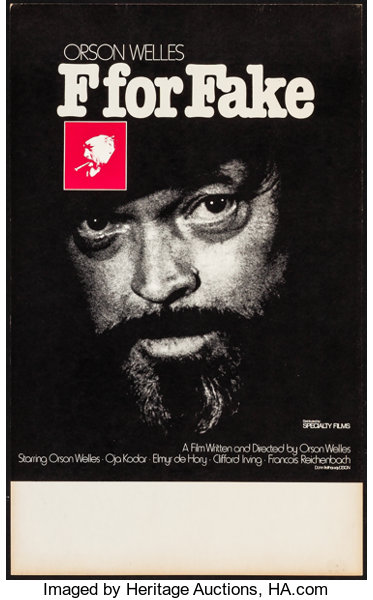 Vintage original 22 x 13 1/2″ (56 x 34.5 cm.) window card poster, USA, FINE. Orson Welles, Oja Kodar, Joseph Cotten, Francois Reichenbach, Richard Wilson, Paul Stewart, dir: Orson Welles; Janus Film. Effective poster and portrait of Welles for his free-form documentary. The story focused on the notorious art forger Elmyr de Hory and his biographer, Clifford Irving. Irving also wrote a fraudulent bio on Howard Hughes and the film goes on to touch upon Hughes career and that of Orson Welles. The documentary was a set up as well, and a fake on its own, thus Welles’ entire commentary is a fakery! Included in the film were some of Orson’s old Mercury players, among them Joseph Cotton, Richard Wilson and Paul Stewart. Pure Orson. Unusual and rare piece, very difficult to find, for Welles’ last completed feature.