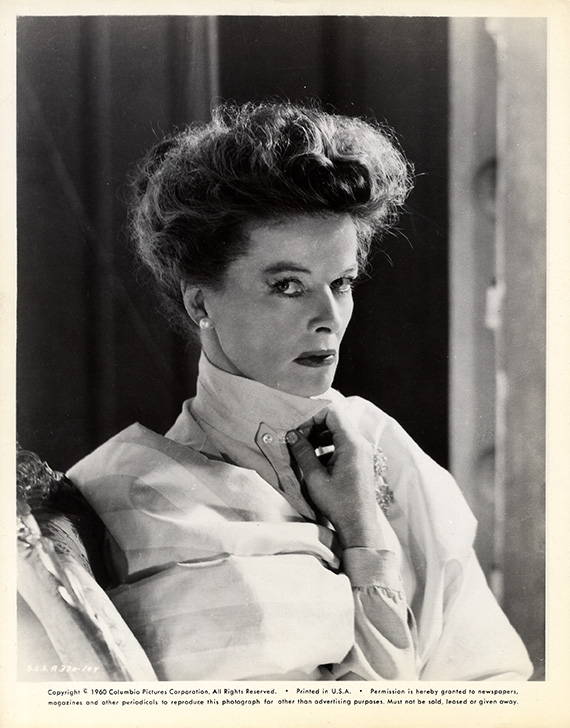 The collection comprises the following photographs:

MARY OF SCOTLAND (1936) – 1 (program, with photo of Hepburn, signed in pencil by photographer Ernest Bachrach)

The life and career of Katharine Hepburn is a true study of the independent woman. Both her professional and personal life reflect the social attitude towards independent women and their influence and acceptance throughout the 20th century.

Born May 12 1907 in Hartford, Connecticut to a doctor and a suffragette, she was from birth encouraged to speak her mind, develop her brain and be physically fit.

Independent and somewhat rebellious from youth, she shunned convention, and this was embraced in her early career. A result of the Depression meant that many women needed to re-invent their lives — many seeking jobs and needing to be aggressive in doing so. Hepburn’s early films reflected strong women in the workforce, many of them professionals — no matter the setting and period of the story. These portrayals gave hope to women that they too could achieve independent success. The scripts were saddled with romantic convention but that made the overall story acceptable to all tastes — particularly as the 1934 Production Code took force.

Moviegoers became tired of the aggressive maverick as the economy improved in the late 1930s. Hepburn’s home studio, RKO became less open to finding the unconventional vehicles it had taken a chance on for several years and Hepburn was labeled box office poison. As independent in the handling of her own careers fate as she was her personal life she found her own project, THE PHILADELPHIA STORY. It became a hit on Broadway and she single handedly launched a new and successful branch of her film career by working with MGM for the film rights and signing a contract which took her through the 1940s.

PHILADELPHIA STORY bridged a gap from independent woman who gets her comeuppance to independent career woman who also needs a seemingly conventional and equal partner. This she found in her teaming with Spencer Tracy. This worked well both during and after World War II, particularly as women needed to fill jobs left by men during the war thus empowering them with an independence which continued in the workplace after.

Hepburn’s 1950s and 1960s career reflects attitudes towards women as they age. She starts to play spinsters (such as in THE AFRICAN QUEEN and SUMMERTIME) who are looking for love. As America became seemingly a bit more conservative, so did some of her roles — but the 1950s and early 1960s were a strange period of convention and dark psychology and her roles in SUDDENLY LAST SUMMER, RAINMAKER and LONG DAY’S JOURNEY INTO NIGHT reflect that.

As the 1960s progressed her characterizations grew to accept the changes in society, such as in GUESS WHO’S COMING TO DINNER and her roles later were those of older age reflecting on the past but embracing the present.

Hepburn was one of the very few film actresses whose career spanned the entire sound film era of the 20th century. She would be nominated for 12 Academy Awards, winning 4 and bookend her work with awards for MORNING GLORY (1933) and ON GOLDEN POND (1981). She was one of the few talents to have control over her career and one of the few to have such great longevity.

This collection reflects nearly every theatrical film that she appeared in, between the years of 1932 and 1994. It is a collection worthy of study. There are 230 photographs. All but a few are 8 x 10″ single weight glossy original release prints (a few are slightly smaller or on double weight paper). Overall condition of the collection is FINE.