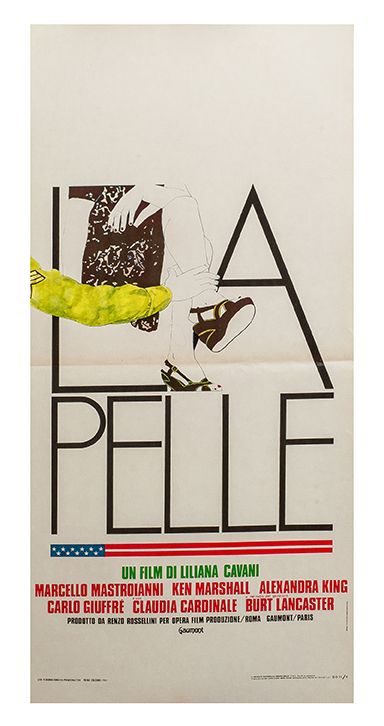 Italian director Liliana Cavani, was one of a number of women directors who came to international prominence in the 1970s. Her body of work is remarkably eclectic, with films about Galileo, Nietzche, Francis of Assisi, but also including films about transgressive sexuality. Her films are clearly shaped by her perspective as a lesbian and a feminist.

There are scattered small marginal tears to posters, folded once (as issued), light signs of handling to booklets and photos, overall NEAR FINE. The collection contains 7 posters, 2 booklets, and 5 photos, making for a total of 14 pieces.

Cavani’s international breakthrough film, about the transgressive, sadomasochistic relationship that develops between a former concentration camp victim and her tormentor, who was once a camp guard.

.Italian promotional booklet in English for global distribution, quarto, 6 pp.; 4 French photos, approximately 9 x 6″ (23 x 15 cm.) A typically transgressive film, set in North Africa, about a young woman who is having an affair with an oil rigger while still involved in an intimate relationship with her stepfather. The film, like so many of Cavani’s films, is now of renewed interest because it reflects a woman’s perspective on sexuality, which is very intensely on display.