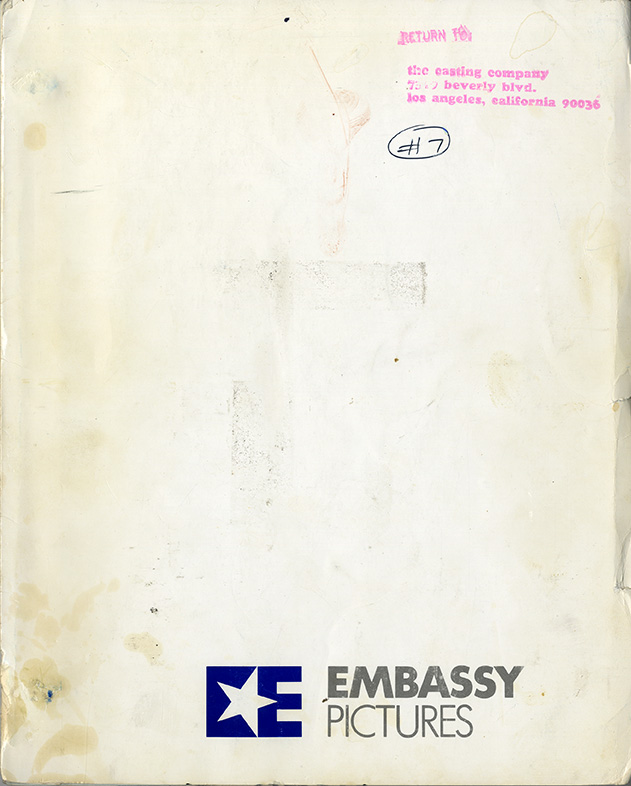 (STEPHEN KING, SOURCE) THE BODY [original title for STAND BY ME] Screenplay by Raynold Gideon and Bruce A. Evans February 20, 1985 [with revised blue pages dated March 4, 1985]. Based on a short story by Stephen King.

“I was twelve going on thirteen when I first saw a dead human being.”

One of the definitive nostalgic coming-of-age films of the 1980s, STAND BY ME (released on August 8, 1986) was described by its director Rob Reiner as his own coming-of-age movie, by which he meant that after having directed the successful comic satire THIS IS SPINAL TAP in 1984, and THE SURE THING in 1985, STAND BY ME felt to Reiner like his first truly personal film, the film during the shooting of which he realized that this was the kind of movie he really wanted to make.

STAND BY ME was adapted by the screenwriting team of Raynold Gideon and Bruce A. Evans from “The Body,” a semi-autobiographical novella by Stephen King, originally published in his 1982 collection DIFFERENT SEASONS, revised by King from an earlier unpublished version written eight years earlier. It was the third produced screenplay by Gideon and Evans, who had previously co-written the screenplays of Noel Black’s A MAN, A WOMAN, AND A GUN (1979), and John Carpenter’s STARMAN (1984). In his audio commentary to the STAND BY ME DVD, director Reiner says that he and co-producer Andrew Scheinman also made substantial (uncredited) contributions to the screenplay, drawing from their own childhood experiences.

Although Stephen King is known mainly as a best-selling horror writer, “The Body” was not a horror story per se. It was, as noted, a coming-of-age story, and like most coming-of-age stories, it deals with a rite (or rites) of passage. However, where in most coming-of-age tales, the rite of passage has something to do with sex (it might be something as simple as a first kiss), in “The Body,” the rite of passage is the boy protagonists’ first real encounter with death, in the form of the dead body of one of their contemporaries. It is also a journey story, describing the arduous two-day walking journey of Gordie, the 12-year-old boy protagonist, and his three friends through the woods of Maine (Oregon in the movie) to the hidden spot by the railway tracks where the body is found.

STAND BY ME also represents the culmination of a cycle of 1980s films dealing with the adventures of a group of kids on the cusp of adolescence. The first and most famous of the cycle was Steven Spielberg’s E.T. THE EXTRATERRESTRIAL (1982), followed by A CHRISTMAS STORY (Bob Clark, 1983), the slightly older adolescents of GREMLINS (Joe Dante, 1984), the two boys of EXPLORERS (Joe Dante, 1985), and the half dozen boys and girls of GOONIES (Richard Donner, 1985). Significantly, two of the four principal cast members of STAND BY ME, had appeared in some of those earlier films, River Phoenix in Dante’s EXPLORERS, and Corey Feldman in Donner’s GOONIES. (Stephen King’s twice-filmed 1986 novel, IT, about a group of kids opposed to an evil clown-monster, can also be considered part of this cycle. The cycle’s most recent manifestation is Netflix’s 1980s-set fantasy series STRANGER THINGS which borrows from all of the aforementioned titles.)

Set in 1960, Reiner’s movie has a soundtrack filled with 1950s rock classics, including Ben E. King’s “Stand by Me,” which eventually replaced “The Body” as the film’s title. Other notable changes between the novella, the screenplay, and the film include making the writer/narrator Gordie a more active character — in the novella, the four boys Gordie (Wil Wheaton), Chris (River Phoenix), Teddy (Corey Feldman), and Vern (Jerry O’Connell) fend off a gang of older bullies with a gun fired by Chris, the de facto leader of the group. In the film, it is Gordie (writer King’s alter ego) who fires the gun, a change that King approved.

King’s novella is significantly darker than the screenplay and film adapted from it. Though in the climax of both the novella and the movie the boys succeed in scaring off the bullies, in the novella they pay for it later, each of the boys eventually being ambushed and beaten by the older thugs. The movie omits the subsequent beatings. Moreover, in the novella, unlike the film, Gordie describes how each of his three friends met an untimely end, all three of them dying before their mid-20s. In the movie, we only hear about how Chris, studying to be a lawyer, was stabbed to death while trying to break up a fight.

The novella is much more class-conscious than the movie. In the novella, it is clear that all three of Gordie’s friends are “white trash,” Chris, a convict’s son, being the only one with any future potential. In the novella, Gordie dreams that he and Chris are drowning, dragged down by the other two boys.

Though the film is more feel-good than the novella, it is generally faithful to it, incorporating substantial portions of King’s prose into the film’s narration (spoken by Richard Dreyfuss as the older Gordie). The dialogue is mostly King’s. At night, future writer Gordie tells stories to his friends, and we see those stories dramatized as vignettes within the film.

While King hated the film that Stanley Kubrick made from his novel THE SHINING, he loved STAND BY ME which was, by any standard, an accomplished and dramatically effective adaptation of King’s work.