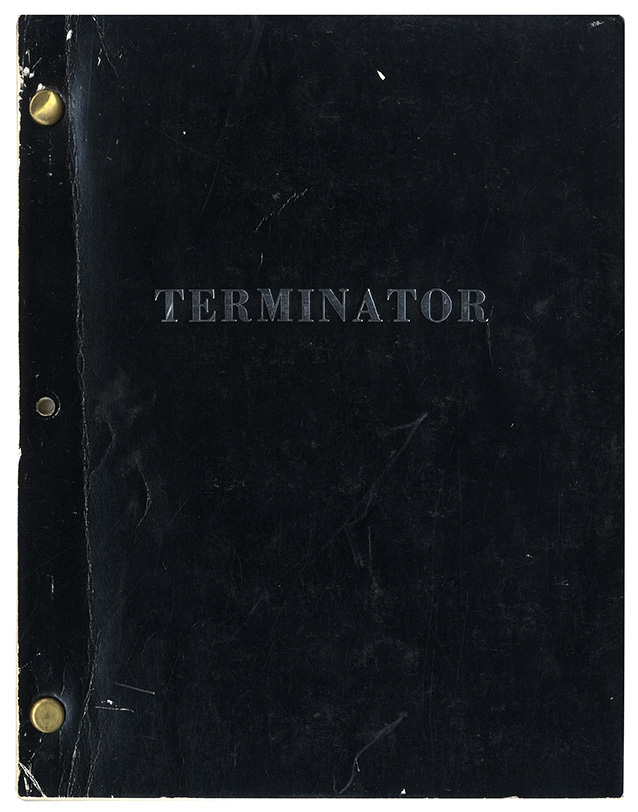 This film, an enormous success at the time of its release and now an acknowledged classic, included in the National Film Registry, went through a typically tortuous path to production, with many people, including Arnold Schwarzenegger, initially dubious about it. The screenplay itself went through numerous revisions, this one dated a year and a half before the film’s release in October, 1984.

The film famously is about a cyborg assassin from 2029 who goes back in time to Los Angeles in 1984. Los Angeles and southern California provide a noteworthy visual background to this famous movie.

Prior to writing and directing THE TERMINATOR, James Cameron (born 1954 in Kapuskasing, Ontario) had worked as a special effects artist and production designer on such films as the Roger Corman-produced BATTLE BEYOND THE STARS and GALAXY OF TERROR, and John Carpenter’s ESCAPE FROM NEW YORK, making his transition to directing with PIRANHA II: THE SPAWNING (1982). Cameron’s original screenplay for THE TERMINATOR was inspired in part (he eventually acknowledged) by contemporary action films like THE DRIVER and MAD MAX II, and, in particular, by two scripts Harlan Ellison had written for THE OUTER LIMITS television series, “Soldier” and “Demon With a Glass Hand.” From John Carpenter’s HALLOWEEN, he borrowed the concept of a woman being stalked throughout the entirety of the film by an unstoppable “monster.”

This fourth draft screenplay, unlike the completed film, begins with the cyborg soldier referred to as the Terminator (Arnold Schwarzenegger in the film) arriving naked from the future in an alley behind a Los Angeles schoolyard. Since it is night, the only witness to his arrival is a cat. The completed film, on the other hand, begins in the future (2029) with a nighttime battle scene, very much like the future battle scene/wasteland prologue of THE OUTER LIMITS’ “Soldier” episode, and it is only after the battle scene concludes that we cut to present-day Los Angeles where the naked Terminator arrives from the future in a crackle of blue electrical sparks.

In this screenplay draft and the film, the Terminator’s first encounter with the humans of our era is a run-in with a gang of hostile punks to whom he demands, “Your clothes. Give them to me,” before killing them. However, the movie improves on the scene as written by staging it adjacent to Los Angeles’s Griffith Observatory. This is very much a L.A. movie.

The next sequence shows the arrival (also naked, also in a shower of sparks) of good-soldier-from-the-future Kyle Reese (Michael Biehn) who is here to oppose the Terminator. In the screenplay — but not the film — a third soldier from the future appears, but he arrives dead, skewered with iron slats, having “materialized in the same space occupied by a fire escape structure.” This leads into an action sequence where Reese is chased by police through the alleys of skid row Los Angeles and into a “discount department store” where he eventually eludes them.

“SARAH CONNOR is 19, small and delicate-featured. Pretty in a flawed, accessible way. She doesn’t stop the party when she walks in, but you’d like to get to know her. Her vulnerable quality masks a strength even she doesn’t know exists.”

Sarah, who will be played by Linda Hamilton, is a waitress in a “Big Bob’s” restaurant. She is the reason why both soldiers from the future have travelled to our time — the Terminator, to kill her before she gives birth to the warrior who will defeat the oncoming Robot Apocalypse — Reese, to save her.

Now we see the Terminator on a rampage. Looking for “Sarah Connor,” he kills another woman with the same name. He enters a pawn shop — gun shop in the film — and, after gathering an armful of high-tech weaponry, kills the owner (Dick Miller). The Terminator’s rampage — he goes on to kill a second “Sarah Connor” — is intercut with scenes involving Reese and the “real” Sarah Connor. Cameron’s screenplay is light on dialogue, heavy on action. There will be even less dialogue in the completed film.

Another screenplay plot thread follows two homicide detectives who are looking for the man responsible for the killings, Lt. Vukovich, who is white, and his assistant, Traxler, who is black. The movie will reverse the races, with the lieutenant played by a black man (Paul Winfield), and a white assistant (Lance Henricksen).

Eventually, the three main characters — Sarah, the Terminator, and Reese — converge in a bar/nightclub on L.A.’s Pico Boulevard — called “Stoker’s” in the screenplay, “Technion” in the film, which is a nice touch since the film itself could be called a tech noir. There is an elaborately described shoot-out which concludes with Sarah fleeing the bar/nightclub in the company of her protector and soon-to-be love interest, Reese.

There are car chases and more shoot-outs, including one in a police station. (In this screenplay draft, Schwarzenegger’s most famous Terminator line, “I’ll be back,” is “I’ll come back.”) Cameron loves weaponry, and he loves machines. The interface of man and machine (technology) also lies at the thematic heart of two of Cameron’s biggest later hits, TITANIC (1997) (man and boat), and AVATAR (2009). There is also Cameron’s singular brand of feminism — he loves smart and physically capable female protagonists. In THE TERMINATOR, it is Sarah who ultimately defeats the cyborg from the future.

Some of the TERMINATOR screenplay and film’s most inspired imagery arises from the interface of man and machine: (1) the Terminator’s “cyborg vision” which we see in point of view shots providing him with a constant stream of data regarding whatever he is looking at; (2) the Terminator’s robotic ability to mimic the voice of any human he has heard, including, on the telephone, Sarah’s mother; (3) the Terminator using an exacto-knife to remove and repair his cyborg eye; (4) the climactic melting down of the Terminator’s flesh covering to reveal the still dangerously functioning metal skeleton underneath.

There are scenes in this screenplay draft that didn’t make it into the completed film, for example, a scene where Sarah and Reese hitch a ride with a surfer truck driver, a scene where Reese helps a little girl recover a helium balloon that is stuck in a tree.