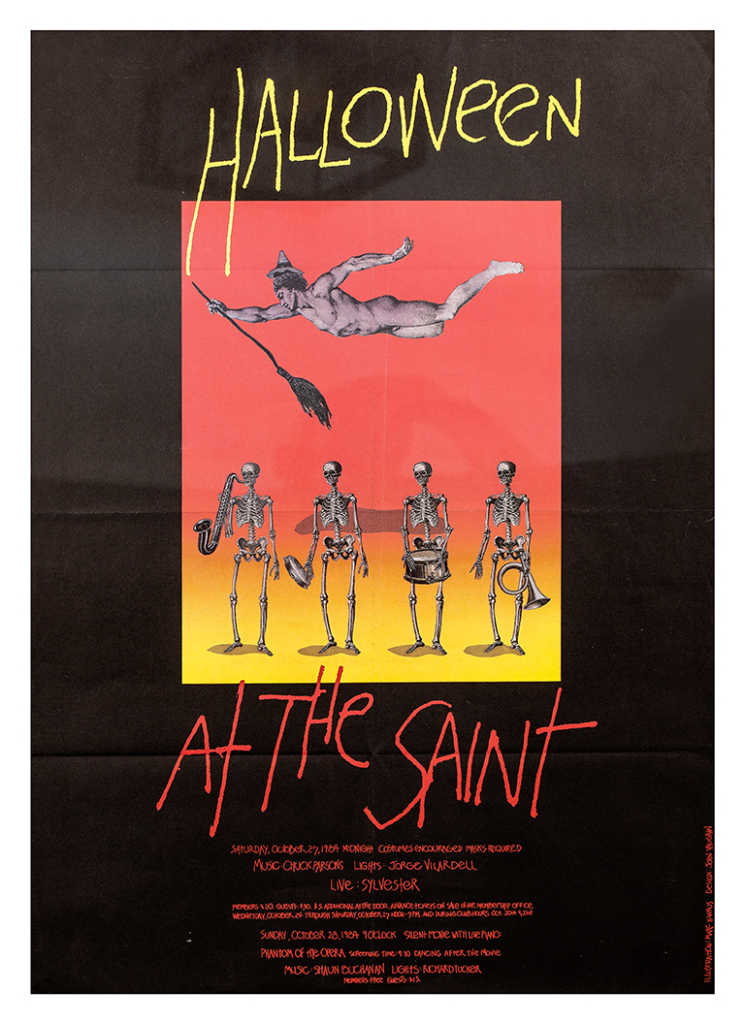 A collection of 33 posters, dated from 1982 through 2004, of the famous gay disco The Saint. This club opened September 30, 1980, and closed in 1988. However, it continued on through a variety of pop up events, which went on and continued into this century. Most of these posters were created during the era of the AIDS crisis.

The Saint was technically and creatively one of the best dance clubs of its era. The circular dance floor (5,000 square feet or 460 square meters) was topped by a perforated planetarium dome 76 feet (23 meters) in diameter and 38 feet (12 meters) high. In addition to hiding the speakers, the dome served as a spectacular palette for the lighting effects. A circular mirrored disco ball to be lowered into the space. The speaker cabinets were located on, and attached directly to, the outer surface of the dome, creating a very euphonic “surround sound” effect, the sound system in the club consisted of 500 speakers generating 26,000 watts.[4] In the center of the dance floor was a circular light tree constructed on a hydraulic lift. It contained 1,500 lights and as its centerpiece was a rotating, dual Spitz Space System hemisphere star projector, ten times brighter than those used in planetariums.

Directly underneath the dance-floor level was a large lounge with several juice bars. Beer on tap was sometimes served for free to avoid the licensing oversight of the New York State Liquor Authority. Above and outside the dome was what would become the controversial balcony, where patrons could see down to the dance floor, through the scrim of the dome. It was there that men relaxed and, according to the sexual mores of the times, could indulge in sexual activities. Several times during the year, themed parties such as the Black Part and the White Party attracted celebrities from around the world. These Saint parties are considered by most disco historians to be the precursors to the circuit party.

The nightclub was a success even before it opened. Membership packs with floor plans were distributed and before the club opened 2,500 memberships had been sold at $150 each for the first 700 members and for $250 for the rest, with a waiting list established.

It was financed in large part by [owner] Mailman’s other gay venture, the nearby New St. Marks Baths — a gay mecca at the time. The nightclub’s renovation cost $4.5 million, being $2 million over budget ($17 million at 2017 prices). Money was spent repairing the roof, paying six years of back taxes to the city and fitting out the interior. It opened initially as a private membership gay nightclub (returning the idea of a club to “nightclub”), and set the standard for disco presentation, lighting, sound system, hydraulics and technical support.

However, by the end of its second season, AIDS had begun eating through the fabric of gay life in New York City and began to take a heavy and relentless toll on the Saint’s membership. Change came quickly. Membership costs were lowered and the season extended into the summer so that the club was open almost all year round. By its seventh season, membership costs had fallen to $50. It also opened weekly for a straight crowd. Furthermore, by 1985, the Black Party performers were for the first time required to perform safe sex. By 1987, the performance emphasized masturbation, phone sex and mud wrestling, all a far cry from the club’s early days which, on one celebrated occasion, a boa constrictor was used as a prop.” (Wikipedia)

Posters vary slightly in size but are approximately 28 x 20″, with a few measuring 20 x 14″. Posters are folded (as issued), overall NEAR FINE.

— AFTER THE CIRCUS A Saint Evening to Benefit the Gay Men’s Health Crisis April 30 and May 1, 1983. (Design Mark America.)

— THE LAND OF MAKE BELIEVE April 6, 1985. Live: ROBEY “One Night in Bangkok” from CHESS. Painting by Sharon Sprung.

— THE SECOND SUMMER AND THE NEW SEASON [Membership renewal poster] May, [1985]

— THE SAINT AT LARGE PRESENTS HALLOWEEN SATURDAY OCTOBER 31, 1992 AT ROXY (Design by McEwan).