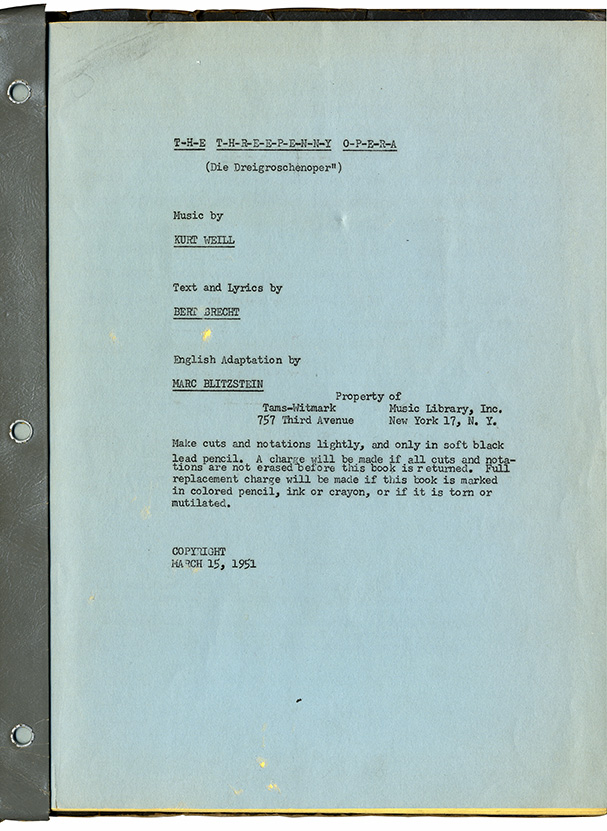 With music by Kurt Weill and text and lyrics by Bertold Brecht, this musical play was one of the cornerstone dramatic works of the Weimar Republic — and it was subsequently banned by the Nazis. It was an unfamiliar work in the U.S. until the debut off-Broadway production, with a new English adaptation by Marc Blitzstein, The show, which highlighted Lotte Lenya, Kurt Weill’s widow, in the role of Jenny, which she had created in the original Berlin production, decades earlier.

“‘Marc Blitzstein,’ said Orson Welles in 1984, ‘was almost a saint. He was so totally and serenely convinced of the Eden which was waiting for us all [on] the other side of the Revolution that there was no way of talking politics to him. He didn’t care who was in the Senate, or what Mr. Roosevelt said — [Roosevelt] was just the spokesman for the bourgeoisie! When he came into the room the lights got brighter. He was an engine, a rocket, directed in one direction which was his opera [The Cradle Will Rock] — which he almost believed had only to be performed to start the Revolution.'” (http://www.masterworksbroadway.com/artist/marc-blitzstein)

After an initial run of 96 performances, after a debut on March 10, 1954, the play was revived in September, 1955, and experienced a great success, with performances running at the Theater de Lys for six years. This script makes reference on one of its preliminary pages to the show winning two Tony Awards on April 1, 1956, and so we are sure that this script was printed sometime after that date, but (based on the paper) probably shortly after.