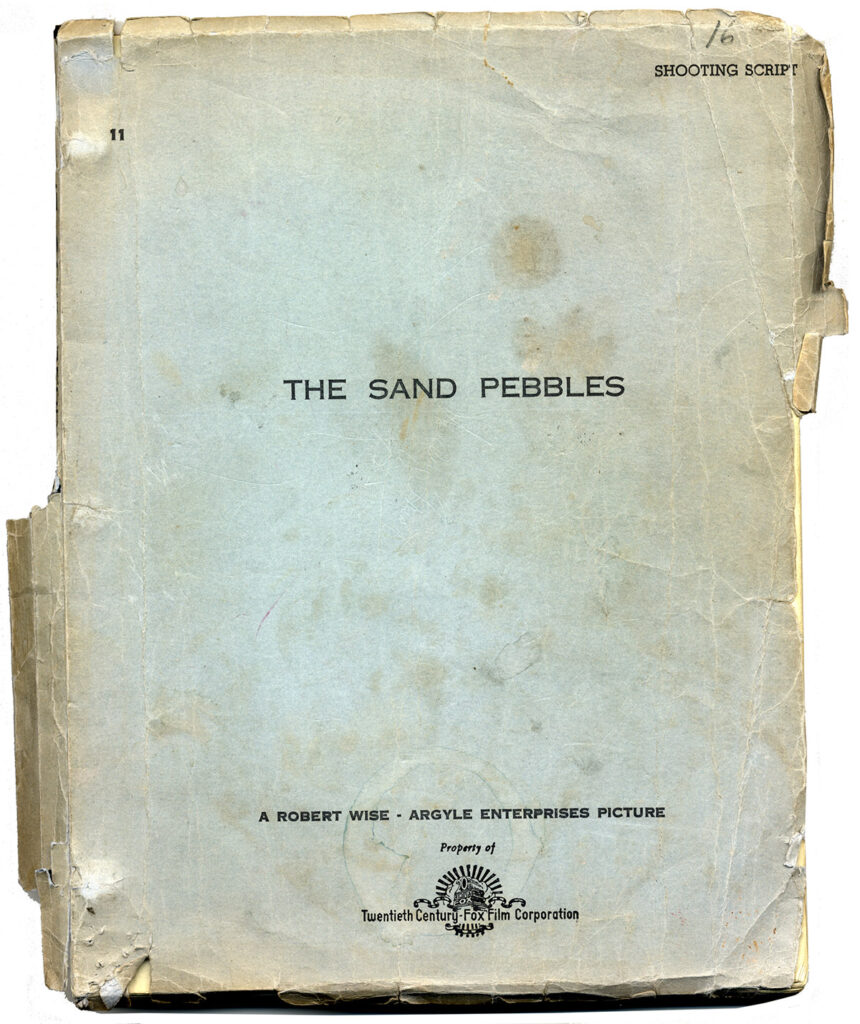 [Hollywood]: Twentieth Century Fox, November 1, 1965. Vintage original film script, 11 x 8 1/2″ (28 x 22 cm.), 188 pp., printed wrappers, brad bound, mimeograph. There is much wear and spotting to yapped wrappers, especially at edges and along spine, with blank back wrapper detached although present. This script was heavily used by a crew member from the wardrobe department, with extensive annotations throughout in marker or pen to indicate what the characters were wearing. Also, many pages have had blank right bottom corners torn off (apparently as this crew member had completed work on a specific scene).

Following the outstanding critical and commercial successes of WEST SIDE STORY (1961) and THE SOUND OF MUSIC (1965), producer/director Robert Wise (1914-2005) was at the peak of his career when he filmed THE SAND PEBBLES (1966), a movie about American involvement in China in 1926, which many have interpreted as an allegory of the Vietnam War.

Though among the most expensive films that Wise ever directed, it is also, paradoxically, one of his most personal. As C. Jerry Kutner wrote in the introduction to his interview with Wise that appeared in ACTION! (Editor: Gary Morris. Anthem Press, 2009):                          “The Sand Pebbles masterfully showcases Wise’s anti-militarism (this time directed at America’s intervention in Vietnam), his fascination with odd couples (Steve McQueen as Jake, and Mako as the ‘coolie’), interracial romance (Frenchy and his girl), existential courage and isolation (Jake at the film’s conclusion), and the metaphysical darkness that lurks at the edges of Wise’s widescreen frame, ready to engulf even the noblest of his characters.”

This shooting script, adapted from a 1962 novel by Richard McKenna, is by New York City-born playwright Robert Anderson (1917-2009), who had previously authored the screenplays for TEA AND SYMPATHY (Vincente Minnelli, 1956), based on his own stage play, UNTIL THEY SAIL (Robert Wise, 1957), and THE NUN’S STORY (Fred Zinnemann, 1959). Two of his screenplays, THE NUN’S STORY and I NEVER SANG FOR MY FATHER (Gilbert Cates, 1970 — adapted from Anderson’s 1968 stage play), received Academy Award nominations for Best Screenplay Based on Material From Another Medium. Unlike most of Anderson’s screenwriting, THE SAND PEBBLES is an epic work in the manner of Robert Bolt’s screenplays for David Lean.

Anderson’s task as adapter was to balance intimate character-driven scenes with elaborately choreographed action sequences, and the screenwriter rises to the challenge.

THE SAND PEBBLES also provided actor Steve McQueen, who plays ship’s engineer Jake Holman, with one of his most effective starring roles. As director Wise observed in the interview referenced above:

“[Holman’s] basically a loner. Steve wasn’t a loner, but he was one of these guys who loved his machines. He built these cars, motorcycles, he loved guns, loved to handle them, it was a macho thing with him. He had a very strong understanding of what made Holman tick.”

The novel and film’s title derives from the name of Holman’s gunboat, the USS San Pablo, which is nicknamed the “Sand Pebble,” and its sailors, the “Sand Pebbles.” Since this is a shooting script, the differences between the screenplay and the completed film are minor. Some changes were made to accommodate the locations where scenes were actually filmed, e.g., Keelung City, a Taiwan harbor, and the screenplay has been generally tightened. Director Wise recalled how McQueen often requested that his dialogue be trimmed or cut when he felt he could express the same thing with a look, and Wise was more than happy to oblige. Occasionally, a scene is completely deleted (most likely in the cutting room), for example, a brief scene where a tailor coolie measures Jake for a uniform.

For a big-budget Hollywood epic, THE SAND PEBBLES is remarkably radical in its politics. More than anything else, it is a critique of Euro-American imperialism, the exploitation of the Chinese coolies for cheap labor, the exploitation of the bar girls for sex, all of which inevitably leads to revolution. The film not only rejects militarism and imperialism in all of its forms, it rejects the very idea of nationalism, as when the missionary Jameson (Larry Gates) says to the American captain, Lt. Collins (Richard Crenna), who has come to “rescue” him:

Damn your flag! Damn all flags! It’s too late in the world for flags!

Similarly, in the same scene, Collins orders Holman to return to the ship, and Holman refuses, preferring instead to remain with the missionaries:

Do you know what this is?

Desertion — in the face of the enemy.

Holman glances quickly at Shirley, then back at Collins.

Captain, I ain’t got no more enemies. Shove off.

This is fundamentally a dark story with almost everyone who Holman forms a relationship with — Frenchy (his best friend on the ship), Po Han (the coolie who assists him in the engine room), Frenchy’s Asian girlfriend, and Holman himself — meeting a tragic end. The one exception is the young missionary teacher, Shirley, played by Candice Bergen, who is Holman’s romantic interest. Only she survives at the film’s conclusion, escaping over the mountains like the Trapp family at the conclusion of THE SOUND OF MUSIC.

As a metaphor for the Vietnam War, THE SAND PEBBLES foreshadows one of the greatest of all Vietnam War films, APOCALYPSE NOW (Francis Coppola, 1979), which is also structured around the central image of a boat traveling upriver.