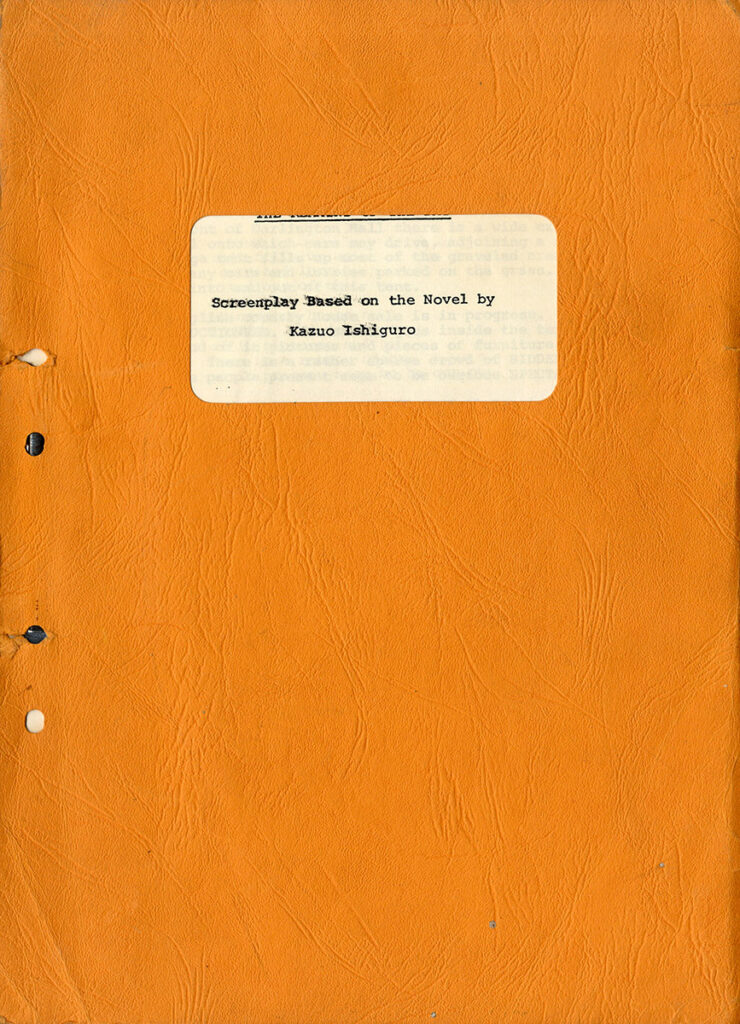 Kazuo Ishiguro’s Booker Prize-winning novel THE REMAINS OF THE DAY was published in 1989 and immediately attracted the attention of Nobel Prize-winning playwright Harold Pinter, who optioned it for the purpose of adapting it into a screenplay. Around the same time, director Mike Nichols became interested in filming the novel and made inquiries into who owned the rights. Upon discovering that Pinter held the option, Nichols contacted Pinter and they agreed to make the film together along with Nichols’ producing partner, John Calley.

Later, after Nichols determined he would be unable to direct the film due to scheduling conflicts, Nichols elected to remain as executive producer, along with Calley, while he and Calley secured the producing/directing team of Ismail Merchant and James Ivory to actually make the movie. Merchant and Ivory had recently scored an arthouse hit with their adaptation of E.M. Forster’s HOWARD’S END starring Anthony Hopkins and Emma Thompson, and they felt these same two actors would be ideal to play the leads in THE REMAINS OF THE DAY (the Nichols-directed version would have starred Jeremy Irons and Meryl Streep). They also brought in their long-time collaborator Ruth Prawer Jhabvala to rewrite the screenplay to tailor it to James Ivory’s direction.

It is difficult to determine how much of the Third Draft screenplay is Pinter’s work and how much of it is Jhabvala’s. Apparently, many of Pinter’s scenes were retained, but due to Jhabvala’s rewrites, Pinter insisted that his name be removed from the project. Much of the Third Draft’s dialogue sounds Pinteresque, but some of the most Pinteresque dialogue comes directly from Ishiguro’s novel.

THE REMAINS OF THE DAY is a study in self-abnegation, the story of a butler who completely suppresses his individuality for the sake of his profession. According to novelist Ishiguro, it is a story of a wasted life, wasted on the personal level — the butler Stevens (Hopkins) never permits himself to express the love he feels for the housekeeper Miss Kenton (Thompson) — and wasted on the political level — Stevens does nothing to prevent the rise of German Nazism and its appeasement by the naïve British aristocracy whom he serves.

There are a number of differences between this Third Draft screenplay and the completed film. Both the beginning and the ending have been revised. The screenplay begins in 1958 with an auction taking place in a tent outside Darlington Hall, selling off paintings and other property belonging to the Manor. This is  followed by a scene showing Stevens the butler going about his business inside the Manor, while we hear Miss Kenton, in voiceover, reading a letter to Stevens, “It is seven years since I last wrote you…”

The film’s revised beginning starts with a helicopter shot of elegant cars driving down a road leading toward the auction tent outside Darlington Hall, and we immediately hear Miss Kenton reading her letter in voiceover, which begins, “Dear Mr. Stevens, you will be surprised to hear from me after all this time…”

While both the screenplay and the film end in 1958 with a scene between Stevens and the Manor’s new owner, the American Mr. Lewis (Christopher Reeve), the screenplay ends simply as follows:

But STEVENS is too busy for further conversation.
He moves past LEWIS into the Dining Room and
begins pulling open the heavy curtains there and
flinging up the casements to let in light and fresh air.

The film’s ending has been brilliantly revised (by director Ivory?) so that a pigeon — an avatar of chaotic nature disrupting the perfect order of the Manor — flies into the room where Stevens and Lewis are conversing; the two of them chase it around the room; and it escapes through a pane in the glass-domed ceiling, thus permitting the film to end as it began, with a helicopter shot, this time ascending away from the Manor in a literal birds-eye view.

What comes in between has also been considerably revised, rearranged, streamlined, and made less explicit, evidently trusting that the lead actors — Hopkins, Thompson, and James Fox as Lord Darlington — would be more than capable of suggesting a maximum of meaning with a minimum of means.

A number of very brief scenes in the screenplay — one with the kitchen staff, another inside the Manor’s chapel — have been deleted from the film.

A number of dialogue exchanges like the following have been omitted from the film:

I’m glad to be out of it, I tell you. There was
something about Sir Geoffrey and his blackshirts
gave me the creeps.

Mr. Stevens always says it’s up to us to run the
house and leave the rest where it belongs.

The most likely reason for their omission being that they make explicit something that is already implicit in the movie and the way its characters behave. Where in the screenplay the entourage of the Fascist Sir Geoffrey, mentioned above, literally wear black shirts, in the movie they do not, once again reflecting director Ivory’s penchant for understatement.

The entire film, as written and executed, is a masterpiece of understatement, deftly balancing the personal and the political, condemning Lord Darlington’s and the other English aristocrats’ misguided actions (blindly supported by the butler Stevens) while at the same time acknowledging the naïve decency and tragic good intentions that lie behind them. As the American Lewis observes in the draft screenplay’s final lines:

I probably spoke a lot of nonsense. It’s better not to
remember what we said twenty years ago. History
has such a way of proving us wrong.