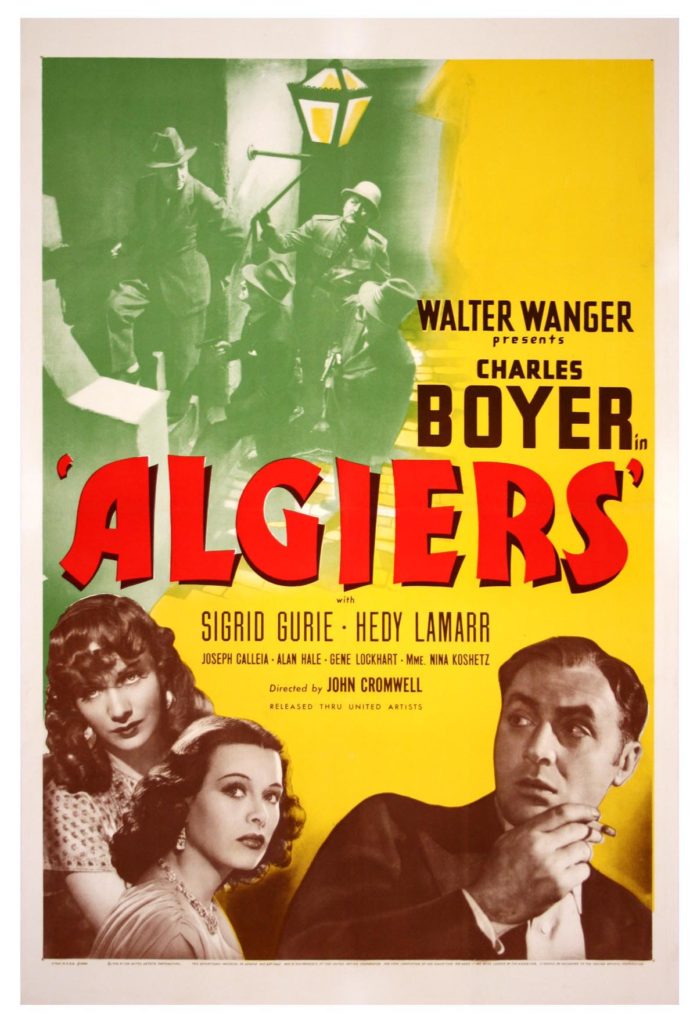 Vintage original 27 x 41″ (68 x 105 cm.) one sheet poster, USA. Hed Lamarr, Charles Boyer, Sigrid Gurie, Joseph Calleia, Alan Hale, Gene Lockhart, dir: John Cromwell; United Artists. Hedy Lamarr made her American film debut in this famous classic romantic melodrama. She had made five films in Europe between 1930 and 1933, the last the notorious ECSTASE, which caused such a scandal that she did not make another film for 5 years. She was contracted by MGM, but Louis B. Mayer loaned her to Wanger for her first American film. It was one of her best and her pairing with Charles Boyer as the notorious jewel thief Pepe le Moko has become legendary and inspired many imitations and caricatures. The film was Academy nominated for Art Direction (Alexander Toluboff) and Cinematography (James Wong Howe) as well as Best Actor to Boyer and supporting to Gene Lockhart. Original poster art for this title is very rare. Present are the many elements of the story, Pepe Le Moko (Boyer), the police force searching the streets outside the protected Casbah, the Casbah gypsy Ines (Sigrid Gurie) obsessed with Pepe and the beautiful visitor (Lamarr) with whom he becomes obsessed. On linen, VERY GOOD.