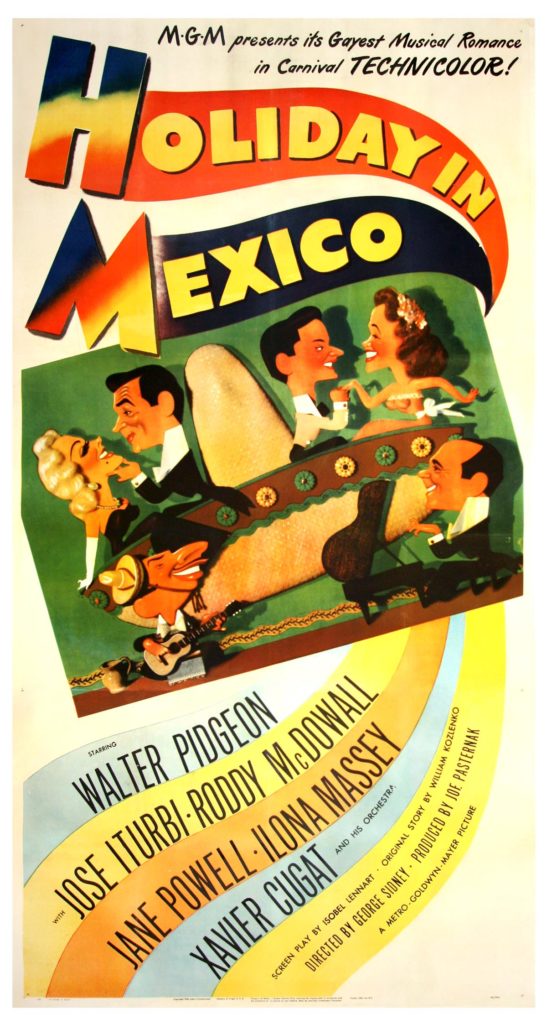 Vintage original 41 x 81″ (102 x 202 cm.) three sheet poster style A, USA. Jane Powell, Ilona Massey, Walter Pidgeon, Jose Iturbi, dir: George Sidney; MGM. Advertised as a musical romance in carnival Technicolor, this poster is a testament to that statement with its vivid rainbow motif. Posters for MGM’s 1940s musicals were lively, and this one has the added rarity of the eccentric caricature art by Jacques Kapralik. MGM often used his charming cut-out collage art for Lion’s Roar magazine covers and full page inserts, but very seldom on posters — making this large format gem a rarity. Kapralik was ingenious in not only capturing the stars’ personalities, but would always include elements of the story within the art. The movie was fun and colorful and short on plot. Producer Joe Pasternak recycled the formula which had worked so well for Deanna Durbin at Universal for new teen soprano star Jane Powell, added Technicolor and snappy direction from George Sidney, and had a hit. Not only was this a film in a long series of musicals which promoted U.S. ally relations with South America, but a young Fidel Castro appears as an extra. On linen, with normal professional conservation to fold-lines, NEAR FINE.