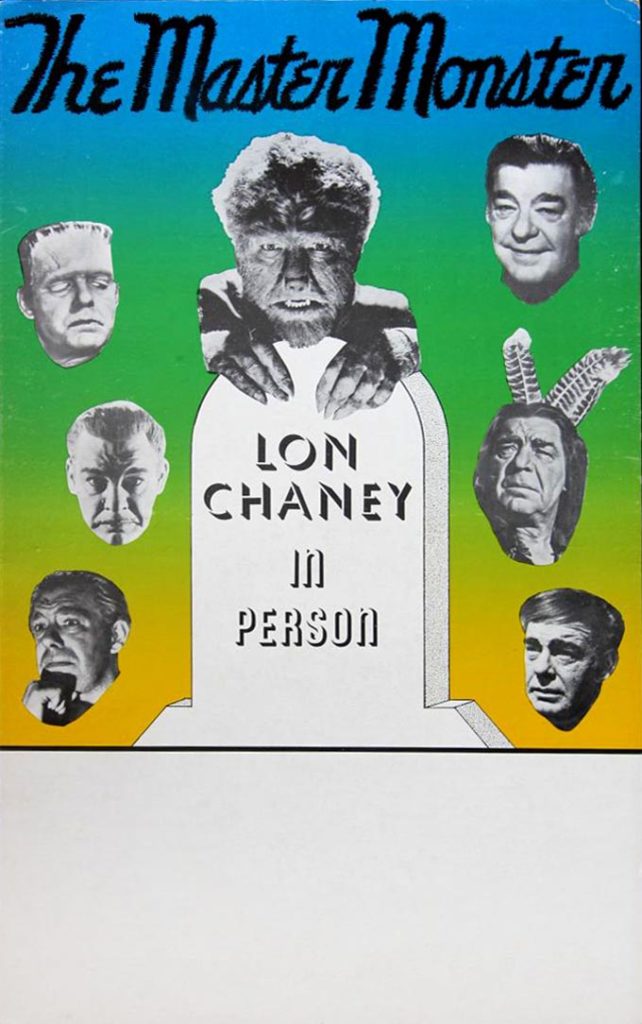 Vintage original 14 x 22″ (35 x 56 cm.) window card poster, USA. Lon Chaney, Jr. — son of the famous silent “Man of a Thousand Faces” — inherited a love for character acting, particularly in the realm of horror characters, from his father, as well as a great knowledge of make-up technique. Though his father did not encourage him to go into the business — and, indeed, he first pursued careers in other fields — show biz was in his blood. His most famous role was as simple-minded Lennie, the John Steinbeck character in OF MICE AND MEN (1939), but he is also the only actor ever to play four of the most popular classic movie monsters — the Wolf Man in THE WOLF MAN (1941); Kharis, the mummy in THE MUMMY’S TOMB (1942); the Frankenstein monster in GHOST OF FRANKENSTEIN (1942); and Count Alucard (Dracula’s son) in SON OF DRACULA (1943). After years of supporting roles, Universal promoted him to lead status in the early-1940s, trading on his famous name to use in their highly-profitable monster series. The fame from this afforded him a career throughout the 50s and 60s in Westerns and lower budget horror films. His backlog of films was released to television in 1958, and from there he had a consistent career in television through 1969, though hampered by alcoholism.
Famous Monsters of Filmland magazine often focused on him, and because of this he was called upon to do personal appearances to talk about his film work. This window card is from one of those appearances. The later images on this poster appear to be from the late-1950s, such as his character of Chingachgook in the TV series HAWKEYE AND THE LAST OF THE MOHICANS, so this piece is likely vintage 1960. There is slight handling wear at upper corners to an otherwise unused, perfect poster, FINE.