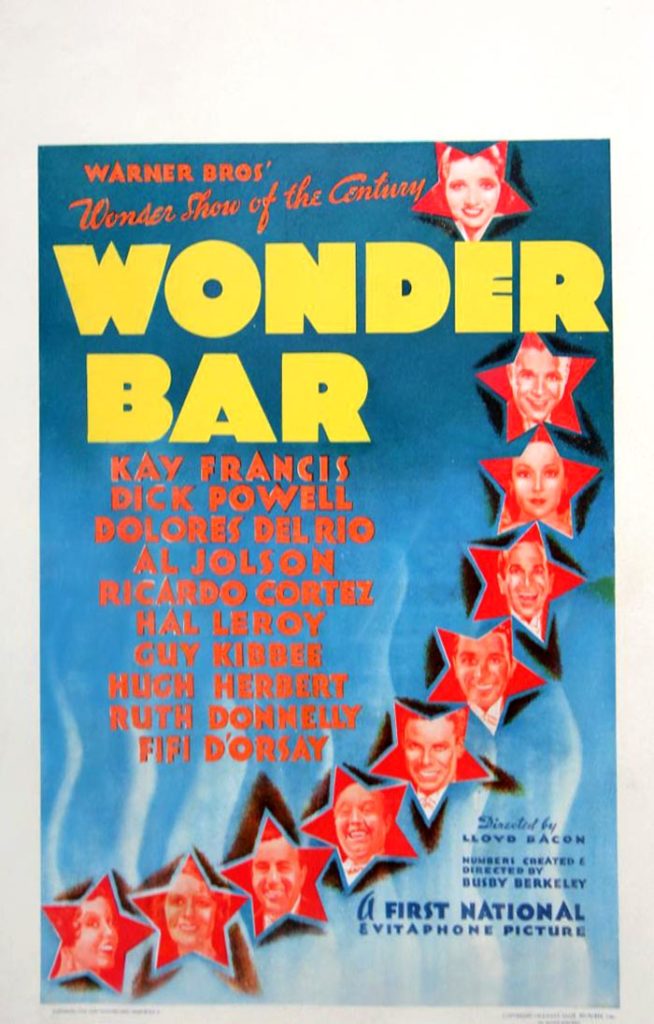 Vintage original 14 x 22″ (35 x 56 cm.) window card, USA. Al Jolson, Kay Francis, Dolores del Rí , Ricardo Cortez, Dick Powell, Guy Kibee, Ruth Donnelly, Hugh Herbert, Louise Fazenda, dir: Lloyd Bacon, Busby Berkeley; Warner Brothers. Wonder Bar is the Paris entertainment bar owned by Al Wonder, and he welcomes the audience in (on camera and in the cinema audience) to his establishment with a song “Vive La France.” This performance (at Jolson’s insistence) would be one of the last to be done live on camera (with the Warner Brothers orchestra live on set portraying the club’s band).

The story involved a tragic love triangle which ended in murder — a more lively script than standard musical faire of the day; still, it was Busby Berkeley’s wildly staged and edited production numbers which to this day are memorable.

This included the number “Don’t Say Good-Night.” Released just prior to the code enforcement, the film is full of illicit sex relationships, homosexual references and getting away with murder. Today audiences may cringe at the now-politically incorrect production number “Goin’ to Heaven on a Mule,” which featured the Hall Johnson Choir. Witty and naughty, audiences loved it and it made a nice profit for Warner Brothers. Paper-backed, there has been some skillful but routine touch up to bottom margin and in the area of a couple of the small images of stars, NEAR VERY GOOD.