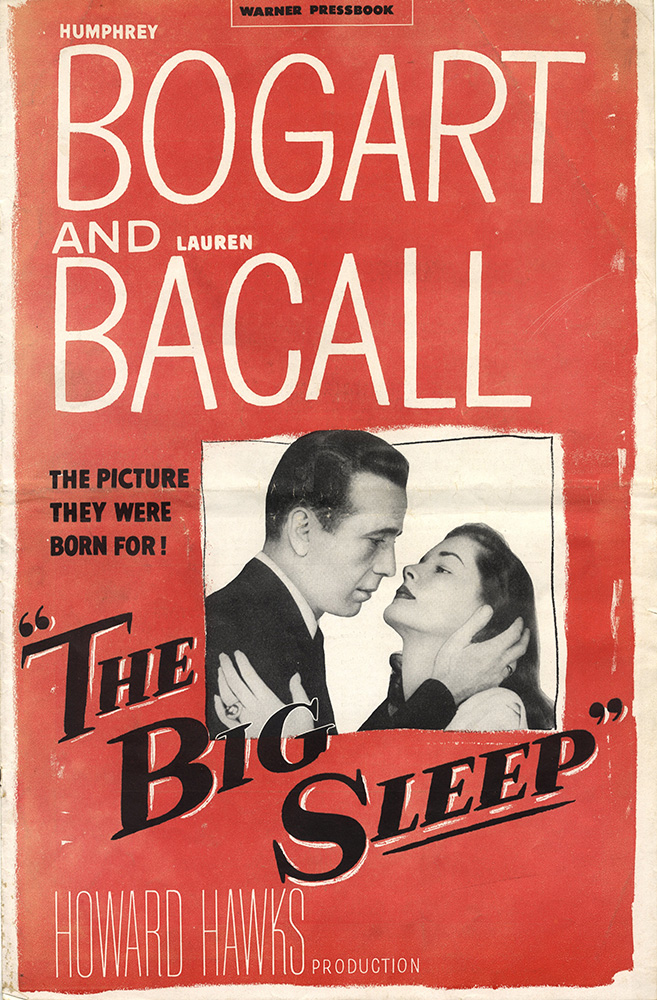 Vintage original 11 x 17” (28 x 42 cm.) pressbook, 16 pages. Humphrey Bogart, Lauren Bacall, John Ridgely, Martha Vickers, Dorothy Malone, Regis Tommey, dir: Howard Hawks; Warner Brothers. The movie has all the elements to make it “the classic” film noir—direction by Howard Hawks, novel by Raymond Chandler, script and racy dialogue by William Faulkner (who could not explain the holes in the script—who could?), Leigh Brackett and Jules Furhman, atmospheric direction of photography by Sidney Hickox, and bizarre performances from Martha Vickers and Dorothy Malone. The leads, now married were the most popular (if unlikely) romantic team in films, only adding to the strangeness and powerful chemistry of the film. There is a special motion picture edition of the book, a R. C. Cola tie in campaign featuring Lauren Bacall, Resitol Hats modeled by Bogey, Deltah Jewelry modeled by Bacall and Martha Vickers and special pin up stills available. There is a pre-written Tabloid interview with Bacall as well as Cosmopolitan and Look magazine articles. There is even a building size blow up of Bacall for display outside the theatre. There are great articles and posters too. The cover is loose but all is intact. Originally folded, it has been stored flat. Some wear to cover. NEAR FINE.