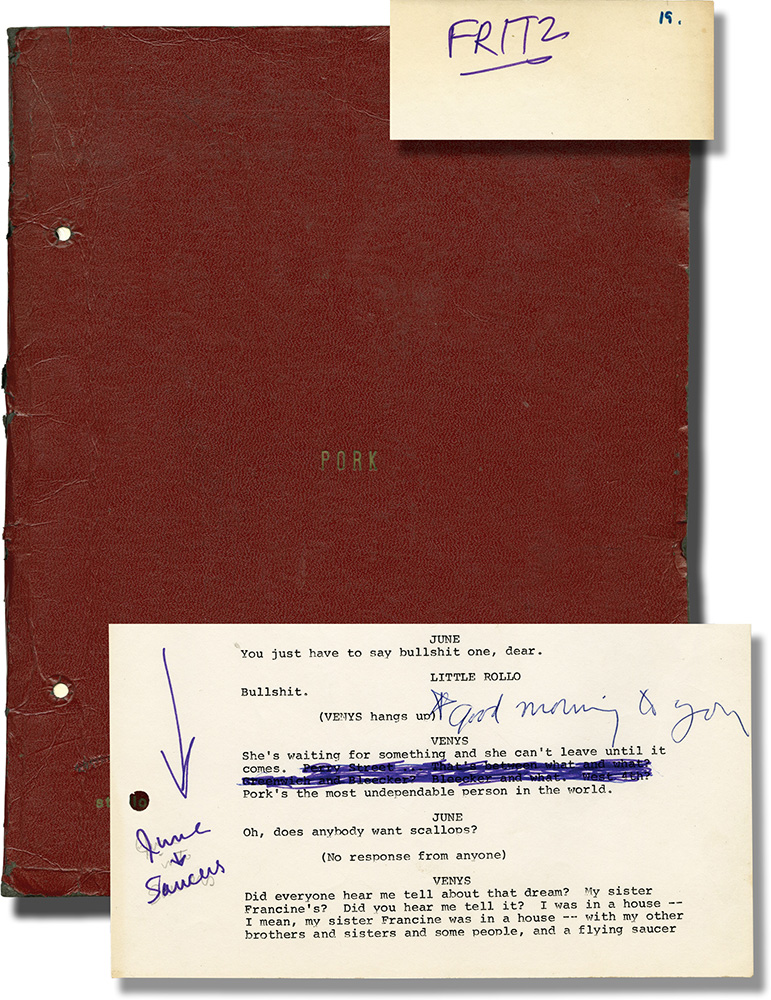 New York: N.p., ca. 1971. Script for the US premiere of the 1971 play. Working copy belonging to the play’s musical director, Fred “Fritzy” Hughes, with profuse annotations by Hughes on virtually every page, along with additional annotations in at least two other hands, two very clearly by Warhol in his trademark ball point pen. Annotations include dialogue revisions, additions, and deletions, set direction, and a great deal of information regarding musical numbers and cues, as well as speculation on what music would be used. Printed by Studio Duplicating Service in New York, in their standard wrappers with a credit on the front wrapper. A fascinating piece, rare even without annotations, but even more desirable in that it shows both the evolution of the play’s dialogue and music, as well as providing evidence of Hughes’ considerable contribution, one that as far as we know is completely undocumented.

Hughes was one of the more upper-class, cosmopolitan members of Warhol’s circle, his tenure beginning in 1968. Gerard Malanga’s collection of essays, “Archiving Warhol”, provides an interesting character study of a cultural maven who was equally at ease in both conservative and liberal environments. Warhol once noted, “He’d spend mornings and afternoons at the De Menil Foundation, having meetings with people like Nelson Rockefeller… and then straight from that he’d come down to the Factory to sweep floors… [He] got caught up in the scene completely, [moving from] the beautiful De Menil house… into the Henry Hudson Hotel on West 57th”, where many of the Factory members resided. Hughes’ leftover money from a De Menil commission enabled Warhol to begin filming “Lonesome Cowboys” in 1968.

PORK opened at LaMama Theatre in New York City on May 5, 1971, and ran for two weeks before transferring to the Roundhouse Theatre in London where it ran from August 2 to August 28, 1971. Produced by Ira Gale and directed by Anthony Ingrassia, the cast included Jayne County as Vulva, Tony Zanetta as B. Marlowe and Cherry Vanilla as Amanda Pork. PORK was based on tape-recorded telephone conversations between Andy Warhol and Brigid Berlin about her family’s private life, and proved to be a defining counter-cultural event, which would have a significant influence on the evolution of the glam, glitter and punk movements. The London production in particular was instrumental in the transformation of David Bowie’s visual style and stage presentation.

Only two other copies of the script are known to exist: one in the Harvey Fierstein papers at Yale University, and one at the Warhol Museum in Pittsburgh.

Andy Warhol’s PORK, assistant director Lee Black Childers explained, grew out of “boxes and boxes and hours and hours of cassette tapes”, comprising every single telephone conversation that Warhol and Brigid Berlin had in the previous three years, and painstakingly transcribed by Warhol’s long-suffering assistant Pat Hackett. “Basically, it was nothing more than a lot of pointless conversation. It was a comment on a society where nobody listens to anybody else. None of the conversations were linked, everybody just talked.” Anthony Ingrassia, the show’s four-hundred-pound director, painted an even more disorganized impression. Warhol’s initial vision for Pork comprised no fewer than twenty-nine separate acts that would have lasted around two hundred hours. Ingrassia edited this down into a fast-paced two-act play that shifted its attention from a barely disguised Factory to a fairly recognizable Max’s Kansas City and on to Berlin’s hotel room. The lead character, Amanda Pork, was Polk herself in all but name. Other prominent characters included Billy Noname, a businesslike gentleman named Pall, a vicious blonde superstar called Vulva, two nude men with pastel-covered genitals named the Pepsodent Twins, and, practically immobile at the heart of the action, a pale, deadpan, laconic slice of living ennui named B. Marlowe.

Alexander US. Hackett US. Malanga US.