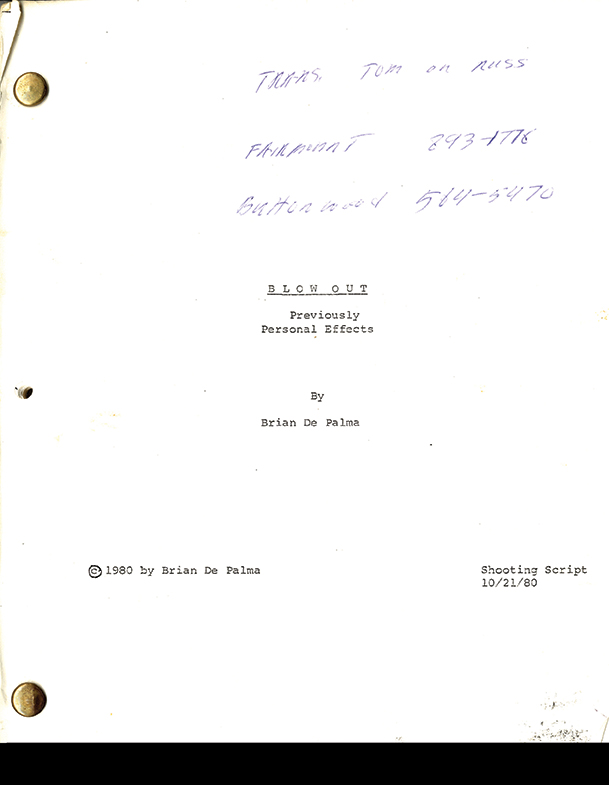 BLOW OUT was the fourteenth feature-length movie directed by Brian De Palma (born September 11, 1940, Newark, New Jersey), following the striking box office success of his previous film, DRESSED TO KILL. Both DRESSED TO KILL and BLOW OUT were produced by George Litto (1930-2019), a former talent agent for mavericks like De Palma, Robert Altman, Dalton Trumbo, and Waldo Salt, who, after producing BLOW OUT, became Chairman of the Board of Filmways Pictures, the company that distributed the two De Palma films.

The theme of voyeurism, so prominent in De Palma films like GREETINGS, SISTERS, DRESSED TO KILL, and BLOW OUT, derives from the work of De Palma’s principal cinematic mentor, Alfred Hitchcock, whose 1954 classic REAR WINDOW might be considered the granddaddy of all voyeurism-themed films. Whereas DRESSED TO KILL was comparatively apolitical, its box office success encouraged De Palma and producer Litto to expand their cinematic ambitions further with BLOW OUT, a film which, while still a Hitchcockian thriller, adds a political dimension to the proceedings, implicitly referencing the Watergate scandal, CIA malfeasance, Chappaquiddick, and the two Kennedy assassinations. Underscoring the story’s political/allegorical aspects, the film is set in Philadelphia during a city-wide celebration of Liberty Day.

This shooting script and the film begin with a pastiche of horror/exploitation movies like HALLOWEEN and FRIDAY THE 13TH, a sequence shot from the POV of a “Maniac” who is spying on the scantily clad inhabitants of a girls dormitory at night. As it turns out, we are watching the rushes of a film-within-the-film, for which our protagonist, audio technician Jack Terry (John Travolta), has been hired to add sound effects.

In the shooting script, this opening sequence is divided into 22 shots or camera setups, alternating the points of view of the killer and his prey, including inserts, and so on. As it was actually shot, the sequence consists of only two very long takes, shot with a gliding steadicam entirely from the killer’s point of view, the first take looking through the windows outside the dormitory, the second take beginning when he goes inside. Moreover, what happens during the sequence was clearly modified from the script during shooting, adding some lines and bits of business, and deleting others. For example, the script describes a campus guard outside the dormitory who “takes a healthy swig” from a liquor bottle and then moves away. In the movie, the campus guard becomes the killer’s first victim, stabbed by his knife. The movie deletes a bit of business described in the script involving a “fat girl” who is chopping celery in the dormitory kitchen. It adds a look at a girl touching herself in her bedroom and, most significantly, a brief glimpse of the rubber-masked killer seeing himself in a mirror (not mentioned in the shooting script) before concluding with his POV of a screaming naked girl in a shower.

The crux of the narrative, from which the film derives its title, is the blowout scene, the scene in which Jack becomes “earwitness” to the assassination of a candidate who is poised to win the presidential primary. (The world believes the candidate accidentally drove off a bridge due to a tire blowout, while in fact the tire was intentionally blown out by a political operative’s bullet.) Here again, De Palma’s screenplay describes what will happen but does not indicate how the director will shoot it. The shooting script describes only two shots preceding the blowout – the first shot, an establishing shot of Jack with his microphone at night standing on a bridge over a creek; the second shot, Jack recording various sounds listed in the script as follows:

PAIR OF LOVERS GETTING IN CAR

The two shots described in the shooting script above become – as directed by De Palma – a montage lasting almost 2 and a half minutes with over 30 separate camera angles.

BLOW OUT is one of the few De Palma films scripted by De Palma himself to feature a male protagonist. Yet it is still fundamentally woman-centered. In the case of BLOW OUT, the woman is Sally (Nancy Allen), the makeup counter girl whose character is the true heart of the film. All the male characters in the script are defined by their relationship to Sally. Manny Karp (Dennis Franz) is the sleazy photographer who hires Sally to seduce politicians and others for purposes of blackmail – she is with the presidential candidate in his car when it plunges into the water. Burke (John Lithgow), the political operative responsible for the candidate’s assassination, wants to murder Sally because she was a witness to the crime. Even Jack, who rescues Sally from the submerged car and genuinely likes her, manipulates her ruthlessly in his quest for the truth. Burke murders two prostitutes who look like Sally in order to make his eventual murder of Sally look like a serial killing instead of the political cover-up it actually is. The movie diverges from the screenplay by shifting two scenes that involve Burke to significantly earlier in the story than they appear in the shooting script – a sound structural decision.

Jack’s decision to “wire” (conceal a wireless transmitter on) Sally in order to expose the assassin leads to one of the most devastating climaxes in the history of film noir and neo-noir. As film scholar Robin Wood writes in Hollywood from Vietnam to Reagan (Columbia University Press, 1986):

The climactic sequence in BLOW OUT, where everything comes together, seems to me among the most remarkable achievements of modern Hollywood cinema: the excess, the flamboyance, the cinematic rhetoric, are here entirely earned by the context. As Sally dies, the Liberty Bell rings out: the irony (as crude and obvious as you please) is, in its savage bitterness, the culmination of the whole film. The celebration of a liberty created by males, for males, at the expense of women, within a culture the film has characterized as at every level corrupt and manipulative, coincides with the death of its latest victim.

The movie adds a follow-up scene, not in the screenplay, showing Jack sitting on a park bench in wintertime, listening obsessively to his recording of Sally’s last happy moments prior to her murder.

The story concludes in a screening room where Jack, thoroughly chastened by his experience, has at last found the perfect scream – Sally’s – to dub into the cheap horror film he has been working on. The BLOW OUT screenplay’s final line is given to one of the horror film’s producers who slaps Jack on the back and says, “Now – that’s a scream!” In De Palma’s completed movie, Jack gets the final line, “It’s a good scream“, he agrees, “A good scream“, and covers his ears.