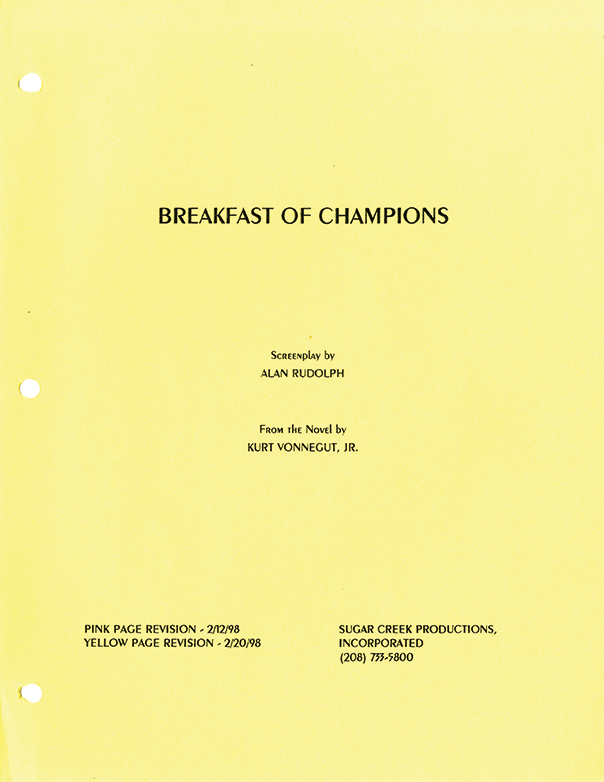 Kurt Vonnegut (source) Twin Falls, ID: Sugar Creek Productions, 1998. Vintage original working film script archive belonging to actor Bob Hildreth, with his name in holograph ink at the top of the first leaf. White standard vinyl-bound ring binder with title on the spine on labelmaker tape. Photographically reproduced, with pink, yellow, and white revision pages throughout, dated variously between 2/11/98 and 2/20/98. Internally NEAR FINE, ring binder VERY GOOD+, with some wrinkle to the clear plastic sleeve. The archive is divided into four sections, each with a tabbed divider. Revision pages are pink (revised 2/12/98), yellow (revised 2/20/98), and white (2/11/98).

Noted throughout the archive is the contact information for the independent entity that produced the film before it was sold, director Alan Rudolph’s Sugar Creek Productions in Twin Falls, Idaho. The production company name is a sly reference to the story’s protagonist, Dwayne Hoover, and his toxic waste-polluted real estate venture. Archive includes a complete Cast and Crew listing with contact information, a location list, floor plans, calendar of events, line schedule, set map, and a complete script with pink and yellow revision pages.

In 1976, director Robert Altman announced he was about to shoot a film version of Kurt Vonnegut, Jr.’s metafictional novel BREAKFAST OF CHAMPIONS, to be produced by Dino De Laurentiis, and starring Peter Falk as protagonist Dwayne Hoover, Alice Cooper as Dwayne’s gay musician son, Bunny Hoover, Sterling Hayden as beleaguered science fiction writer Kilgore Trout, and Ruth Gordon in male drag as Eliot Rosewater, Trout’s biggest fan,. The screenplay adaptation was by Alan Rudolph (born Los Angeles, 1943) who had just written the screenplay for Altman and De Laurentiis’ BUFFALO BILL AND THE INDIANS.

Thanks to the box office failure of BUFFALO BILL AND THE INDIANS, Altman’s version of BREAKFAST OF CHAMPIONS was never made, but 23 years later, Alan Rudolph – by then an established auteur with 17 prior features under his belt – was able to write and direct a version of the project himself. This is the screenplay of that version.

Almost all of Rudolph’s films are ensemble pieces. Rudolph’s version of BREAKFAST OF CHAMPIONS stars Bruce Willis as car dealership owner Dwayne Hoover, Lukas Haas as Bunny Hoover, Nick Nolte as sales manager Harry Le Sabre, Glenne Hedly as Dwayne’s secretary/mistress Francine Pefko, Albert Finney as sci-fi author Kilgore Trout, and Omar Epps as Dwayne’s black admirer, “Wayne Hoobler”. In Vonnegut’s novel, Dwayne had a wife, Celia, who committed suicide before the story begins. In a notable difference from the novel, Celia Hoover, played by Barbara Hershey, is a major presence throughout the screenplay and film, although one eventually realizes she is Dwayne’s hallucination.

Vonnegut’s BREAKFAST OF CHAMPIONS, satirical and digressive, as much essay as fiction, is the kind of book most people would consider impossible to adapt to the screen. Rudolph clearly relished the challenge. Rudolph’s defiantly uncommercial movie adaptation (seemingly designed more for film festivals than general audiences) was universally loathed on its initial release, but has since acquired a cult following, with French critic, Luc Moullet, calling it one of the greatest films of the 1990s.

Alan Rudolph’s BREAKFAST OF CHAMPIONS screenplay and movie retain most of the characters and incidents of Vonnegut’s novel with one major omission – Vonnegut himself, the omnipresent author and narrator of the novel, who provides a sane exterior commentary in contrast to the madness of his characters. Without the presence of Vonnegut as voice of reason – and since almost all of the characters are insane – the resulting movie version is a panorama of uninterrupted madness, emphasized by the willful eccentricity of Rudolph’s direction. This is no accident. Underneath all the comedy and grotesquerie, Rudolph is deliberately painting a portrait of a middle-American pill-addicted consumer society (the film was shot in Twin Falls, Idaho) that is tearing itself apart at the seams.

Interestingly, BREAKFAST OF CHAMPIONS is one of the few Vonnegut works to have significant LGBTQ content. Not only is Hoover’s lounge singer son, Bunny, flamboyantly gay, but he acquires a trench coat-wearing manager and would-be lover before the conclusion of the story. Hoover’s very heterosexual sales manager Harry Le Sabre (Nick Nolte) is a “secret transvestite.”

There are few major differences between this screenplay and the completed film, but a lot of minor tweaking and revisions.

For example, the screenplay begins with the Hoover family’s housemaid, Lottie, in the kitchen calling out, “Breakfast of Champions”. Cut to Dwayne Hoover upstairs inserting a gun in his mouth. Cut to Dwayne’s wife, Celia, “an angel in a nightgown”, who is “searching TV channels for her favorite COMMERCIALS”. Dwayne comes downstairs.

The movie, on the other hand, begins with a TV commercial of Dwayne Hoover advertising his “Exit 11 Motor Village” car dealership. Cut to Celia Hoover with her TV remote switching between her favorite commercials (her face dreamily superimposed over the TV screen). Cut then to Dwayne upstairs inserting the gun in his mouth. Cut then to Lottie the housemaid downstairs calling out, “Breakfast of Champions”. And then, as in the screenplay, Dwayne comes downstairs.

It was a wise choice to begin the movie (unlike the screenplay) with the car dealership commercial. Not only does this immediately tell the audience who Dwayne Hoover is and what he does, but it also signals that we are about to watch a film about consumer culture.

The screenplay’s dialogue is consistently clever, often coming directly from the novel:

I know things that could make your head spin.

My head is always spinning. I want it to stop.

Everything leads to the confrontation of the insane Hoover and the paranoid-schizophrenic Kilgore Trout at the AmeriTel Inn (a real Idaho location) where Hoover concludes, taking one of Trout’s sci-fi fantasies all-too-literally, that everyone around him is a “machine.”

BREAKFAST OF CHAMPIONS, with its exaggerated performances and visual style, may be the most “extreme” movie in director Alan Rudolph’s 22-film career. Rudolph’s screenplay is a fascinating work in its own right, especially when read in conjunction with the movie, as it helps to clarify numerous aspects of the film, e.g., Celia Hoover’s status as a hallucination, Kilgore Trout’s relationship with mirrors – or, as he calls them, “leaks” – that are otherwise ambiguous or obscure.