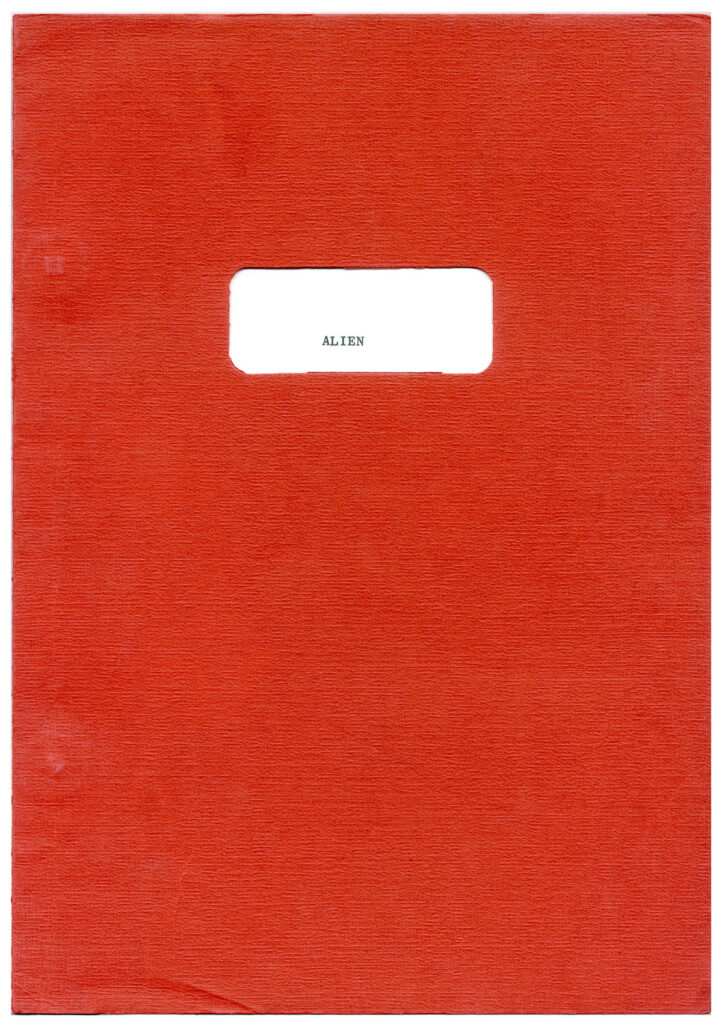 ALIEN was the second feature film directed by Ridley Scott and — along with Scott’s 1982 BLADE RUNNER — is considered one of the best written and directed, most beautifully designed, and most influential science fiction movies ever made. The film is clearly the product of multiple talented auteurs. In addition to director Scott and creature designer H.R. Giger, the film bears the stamp of four principal screenwriters, all of whom are credited on this February 1978 revised draft.

Prior to producing and co-writing ALIEN, Walter Hill had established himself as one of Hollywood’s leading screenwriters and action directors. His oft-praised minimalist writing style can be appreciated in the screenplays he wrote for Peckinpah’s THE GETAWAY (1972) and his own THE DRIVER (1978). ALIEN resembles two of the best films Hill wrote and directed, THE WARRIORS (1979) and SOUTHERN COMFORT (1981), insofar as it concerns an isolated group in transit, confronting an external menace, and his February ’78 draft of the ALIEN screenplay is a textbook example of his characteristically spare approach. David Giler was Hill’s co-writer and co-producer on ALIEN and SOUTHERN COMFORT, and the two of them later co-produced the ALIEN sequels as well as cable television’s TALES FROM THE CRYPT.

Apparently, earlier drafts of the screenplay did not indicate the gender of its characters. Thus, one of the most significant authorial decisions affecting the project was director Scott’s choice to make the protagonist, Warrant Officer Ripley, a woman (iconically portrayed by Sigourney Weaver), and she is identified as such in this 2/78 draft.

The 2/78 Hill/Giler draft is prefaced by a quote from W.H. Auden emphasizing the archetypal quality of the narrative:

Science fiction plucks from within us our deepest fears and hopes then shows them to us in rough disguise: the monster and the rocket.

The 2/78 draft begins — as does the completed film — with a scene of the crew waking up aboard the commercial starship “Nostromo” (presumably an homage by director Scott to Joseph Conrad who had inspired his previous film, THE DUELISTS). There are seven crew members — Dallas, Kane, Ripley, Ash, Lambert, Parker, and Brett — as well as a pet cat (unnamed in this draft, but subsequently named Jones). The on-board computer, “Mother” has awakened them prematurely — before the completion of their voyage — “to tell us that the starboard cells are going out on number two” which they immediately need to repair. In the completed film, the computer awakens them to report an “intercepted transmission of unknown origin,” which they are contractually obliged to investigate. In both this draft and the completed film, these events require them to land on a nearby planetoid (in this draft, they only become aware of the strange transmission after they land).

Looking for the source of the peculiar transmission, they discover a derelict spaceship “clearly of non-human manufacture,” and inside it, a “skeletal shape” that “bears no relationship to the human form” sitting in a control chair. Further exploration leads to the discovery of an underground chamber filled with leathery urns. When Kane (John Hurt) picks up one of the urns, “with shocking violence, a small creature smashes, outward,” burning through his mask and attaching itself to his face. Science officer Ash, overriding Ripley’s protests, allows the “infected” Kane to be brought aboard.

This eventually leads to the movie’s most infamous scene of body horror in which the rapidly maturing Alien, having incubated inside Kane, bursts through his chest and escapes into the ship.

In the section that follows, the crew splits into teams and attempts to locate the Alien within the labyrinthine bowels of the ship in order to capture and eject it. Instead, the Alien picks off the crew members one by one.

Meanwhile, Science Officer Ash (Ian Holm) turns out to be an android placed on board by “the Corporation” to bring the Alien back to Earth — regardless of the lives of the human crew. The remaining crew battle and manage to subdue the Ash robot, and hold a conversation with its detached head, during which it tells them they have virtually no chance against the “perfect” alien organism.

Soon, no one is left but Ripley and her cat. Ripley attempts to destroy the Alien by blowing up the ship while she departs on a shuttle. This is where earlier drafts end, but in this draft — thanks to a suggestion of director Scott — there is a “fourth act” in which the Alien appears on the shuttle and Ripley is forced to confront it before finally ejecting it into space.

Between this script and the final film, much of the action and the dialogue has been tweaked. The film has more workaday banter between the crew members. Missing from the film is a short sequence in this draft where Kane’s floating corpse appears outside the windows of the spaceship.

Among other differences — The 2/78 draft has a love scene between Ripley and the Captain, Dallas, that is wisely omitted from the completed film. The role of Jones the cat has been expanded. Although Brett (Harry Dean Stanton) is the first crew member to be attacked by the full-grown Alien, in the 2/78 draft this occurs while he is with the other crew members; in the completed film this occurs while he is by himself looking for Jones, as the cat watches. The movie also includes a suspenseful section not in this draft where Ripley has to locate Jones before she escapes from the Alien (or so she thinks) on the ship’s shuttle.

Ultimately, notwithstanding that ALIEN’S final shooting script was written by Hill and Giler, the Writers Guild of America awarded O’Bannon sole credit for this classic screenplay.