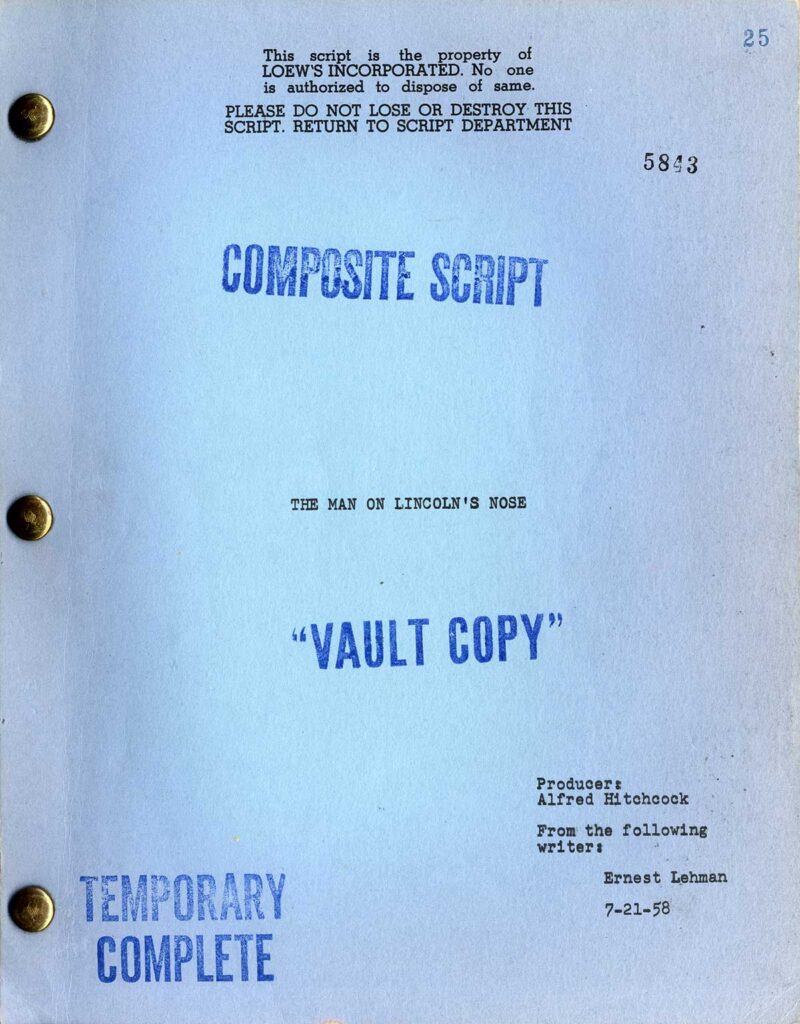 THE MAN ON LINCOLN’S NOSE, the first complete screenplay draft of what would later become Alfred Hitchcock’s NORTH BY NORTHWEST, with a cover date of July 21, 1958 and a revision date of August 8, 1958, was written by Ernest Lehman (1915-2005), a Long Island-born screenwriter best known for the 1957 Alexander Mackendrick film, SWEET SMELL OF SUCCESS (original story by Lehman, screenplay by Lehman and Clifford Odets), and his screenplay adaptations of SABRINA (Billy Wilder, 1954), THE KING AND I (Walter Lang, 1956), WEST SIDE STORY (Robert Wise and Jerome Robbins, 1961), THE SOUND OF MUSIC (Wise, 1965), WHO’S AFRAID OF VIRGINIA WOOLF? (Mike Nichols, 1966), and HELLO, DOLLY! (Gene Kelly, 1969), several of which – including Lehman’s original screenplay for NORTH BY NORTHWEST – were nominated for Academy Awards.

Lehman’s screenplay was written in close collaboration with director Alfred Hitchcock (1899-1980), after the two of them had toiled unsuccessfully on an adaptation of a sea story, THE WRECK OF THE MARY DREARE, a project eventually filmed by others. Lehman and Hitchcock were much happier working on the script of NORTH BY NORTHWEST, a comedy thriller in the manner of earlier Hitchcock “chase” films like THE 39 STEPS and SABOTEUR. Upon its release, NORTH BY NORTHWEST was a critical and box office success, almost immediately recognized as a classic. Science fiction author Philip K. Dick – a specialist in tales of paranoia – called its screenplay the best ever written. As brought to the screen by Hitchcock, and falling between two other Hitchcock masterpieces, VERTIGO (1958) and PSYCHO (1960), NORTH BY NORTHWEST represents the master director at his peak.

Lehman’s August 8, 1958 screenplay draft is remarkably close to the completed film, virtually a shooting script. Among the minor tweaks and revisions – Lehman’s script opens with a brief narration to be spoken over a high angle shot of midtown Manhattan, “possibly” by Hitchcock himself:

NARRATION
Would it not be strange, in a city of seven million people, if one man were never mistaken for another… if, with seven million pair of feet wandering through the canyons and corridors of the city, one pair of feet never by chance strayed into the wrong footsteps?
(a pause)
Strange, indeed.

This narration is omitted from the completed film.

A number of names and locations have been changed. As scripted, the film’s opening scenes were to take place at New York’s St. Regis hotel. As filmed, they take place at the Plaza. The name of the U.N. Ambassador, whose Long Island home is used for Thornhill’s first encounter with the villains, is Lester Tomlinson in the script, Lester Townsend in the movie. The name of the story’s chief villain, played suavely in the film by James Mason, is Mendoza in the script, Van Damm in the movie.

Most significantly, the name of the nonexistent spy for whom advertising executive Roger Thornhill (Cary Grant) is mistaken, setting the wheels of the plot in motion, has been changed from George Rosen in the script to George Kaplan in the movie, the name “Kaplan” invariably reminding the literate viewer of Kafka, whose character Josef K in THE TRIAL – like Roger Thornhill in NORTH BY NORTHWEST – is pursued throughout the story by various shadowy figures for something he didn’t do. Along with THE WRONG MAN (1956), NORTH BY NORTHWEST is the most Kafkaesque of Hitchcock’s films.

In the course of filming, nothing significant was deleted from the screenplay, though one great scene was added. To wit, Thornhill and his mother (Jessie Royce Landis) are in the hotel room of the nonexistent Kaplan when they learn that two of the villains pursuing Thornhill are on their way up. In the script, Thornhill escapes them by taking an elevator down just as they arrive. In the movie, we see Thornhill, his mother, and the villains riding down in the elevator together, along with other random hotel guests, when Thornhill’s skeptical mother unexpectedly turns to the villains and delivers one of the film’s most memorable lines, “You gentlemen aren’t really trying to kill my son, are you?” At which point, everyone – except Thornhill – laughs.

Other memorable lines were added during the course of filming. When Thornhill is being interrogated by the villains at the Townsend home, he shows them his wallet and I.D. to prove who he is, and henchman Leonard (a coded gay character played in the movie by Martin Landau) comments sarcastically, “They make you such good ones.” In the famous crop dusting sequence, the man Thornhill talks to while waiting on the side of the road for the nonexistent Kaplan is much more loquacious as scripted, but in the movie he is given one significant line that isn’t in the script, “That plane’s dusting crops where there ain’t no crops.”

One nice verbal gag that didn’t make it to the completed film – After Thornhill is arrested (while escaping from the villains) for drunk driving, he is examined by a doctor. The doctor asks him to repeat, “Around the rugged rock the ragged rascal ran.” Thornhill responds, “Were those lunatics chasing him too?”

Another significant change for the better – When Thornhill exits the train in Chicago, disguised as a pullman porter, the script (not the movie, thankfully) has him in blackface.

Speaking of the coded gay character, Leonard, all the hints pointing to his homosexuality are there in Lehman’s screenplay, including the line (as he reveals to Van Damm the treachery of the heroine Eve played by Eva Marie-Saint), “Call it my women’s intuition if you will.” In the screenplay, when Van Damm learns from Leonard that Eve has deceived them, “His reaction is carefully controlled. He is too big a man to let Leonard see the humiliation and anger he feels at having been duped by Eve.” But in the movie, he socks Leonard in the jaw.

The climactic chase on the sculpted presidential heads of Mount Rushmore (in Rapid City, South Dakota) was an idea Hitchcock wanted to film long before he collaborated on this screenplay with Ernest Lehman. Yet it was the last portion of the script to be completed, and the one most tweaked with – in terms of dialogue and minor details – in the course of filming. A number of lines, including the following, were changed or omitted:

EVE
What do we do now – slide down Lincoln’s nose?

The making of NORTH BY NORTHWEST was obviously a satisfying experience for both Lehman and Hitchcock, as evidenced by the fact Hitchcock chose Lehman to script his final completed film, FAMILY PLOT (1976).