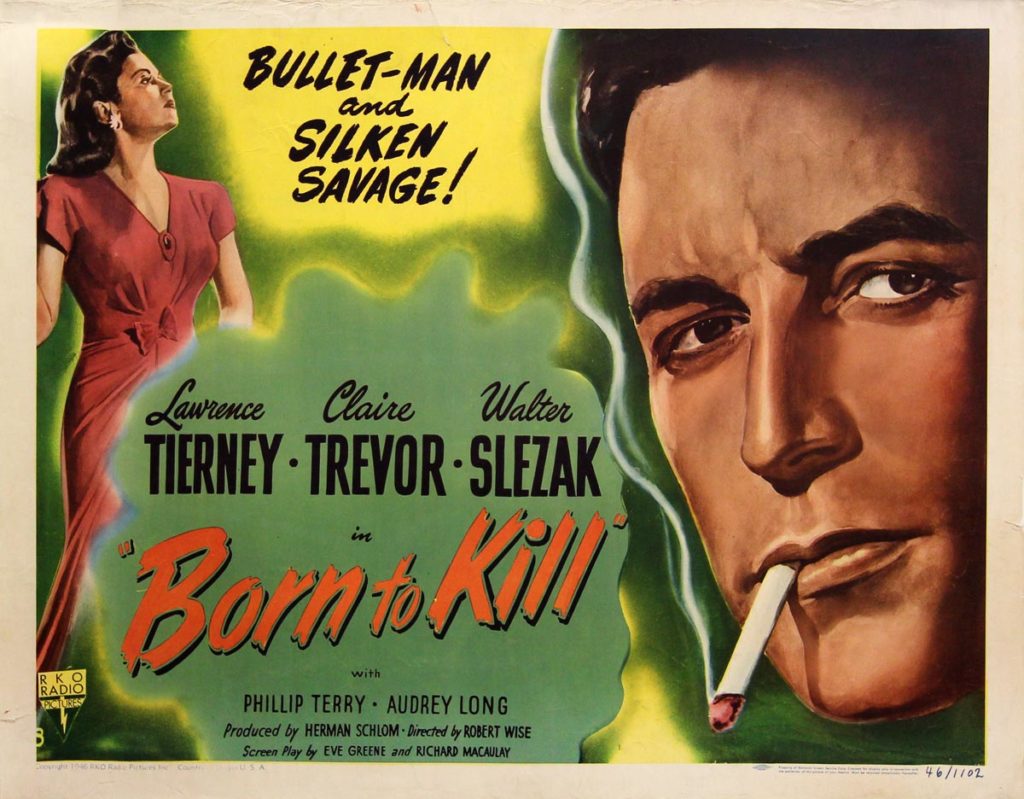 Vintage original 22 x 28″ (55 x 71 cm.) half sheet poster style B, USA. Lawrence Tierney, Claire Trevor, Walter Slezak, dir: Robert Wise, RKO. A calculating divorcee (Trevor) risks her chances at wealth and security with a man she doesn’t love by getting involved with the hotheaded murderer (Tierney) romancing her foster sister. “A grim and complicated melodrama…”, the first of a number of noir films directed by Robert Wise, who had previously been associated with Orson Welles and then with the Val Lewton group at RKO. This leads to the interesting speculation that RKO developed the quintessential noir style of the 1940s due to a unique synthesizing of the expressionistic style of Welles and the moody, Gothic atmosphere of Lewton. BORN TO KILL is an excellent example of an RKO style, not only for its visuals but also for its offhanded depiction of perturbed sexuality and extreme brutality.

RKO created a group of varied posters for this film. This genuinely rare B style half sheet, which we have never seen before, has unusually vivid colors and the extreme prominence on right hand side of artwork of psychopath Tierney. Also note that this poster is unfolded, which is also highly unusual. Unfolded, there is a small chip missing from blank middle right margin, there is a 2″ (5 cm.) tear which extends from the top margin down to above the letter “A” of “BULLET-MAN”, and some assorted minor smudges and creases, but this is overall a wonderful example of this rare piece, VERY GOOD+.