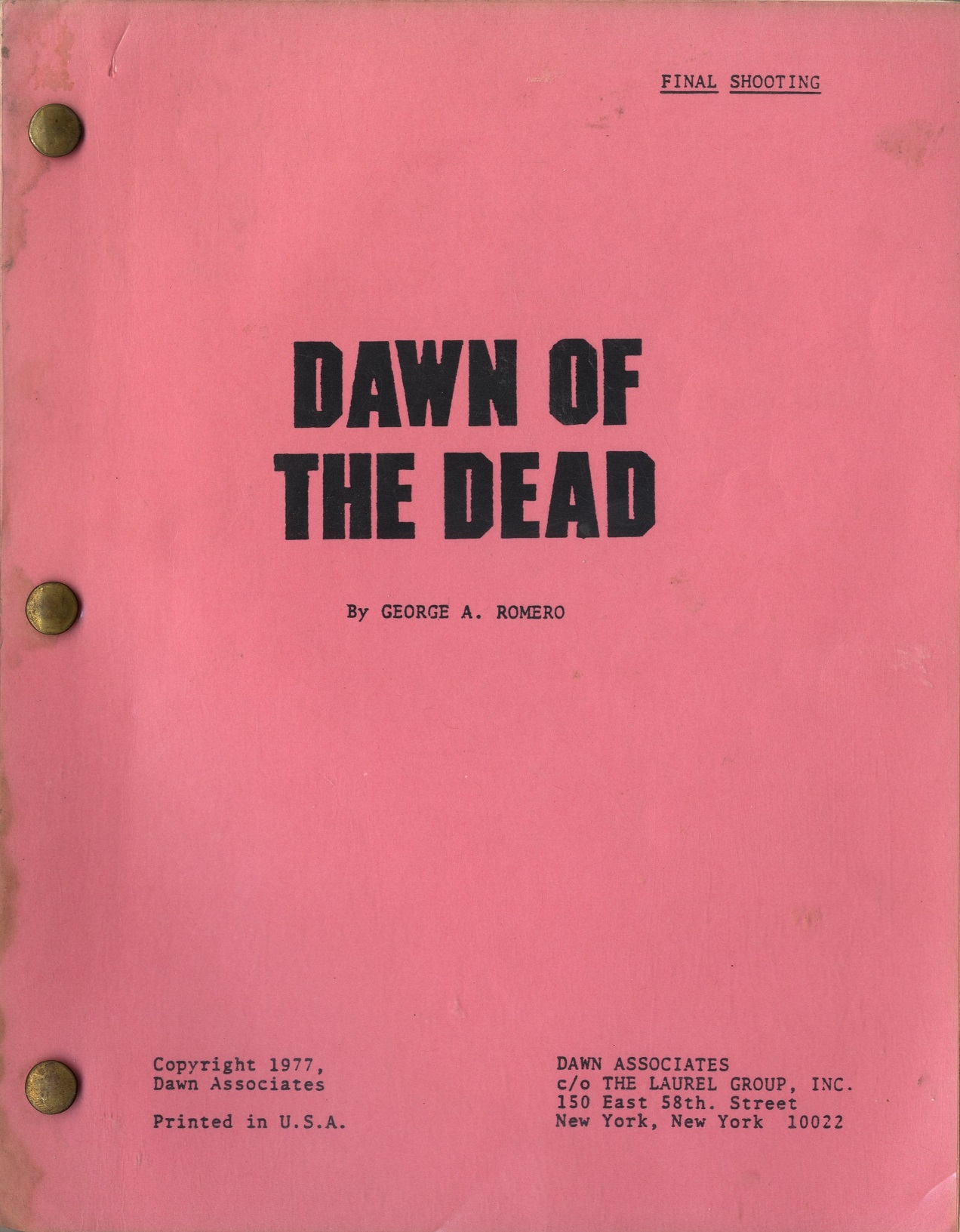 DAWN OF THE DEAD (1977) Final Shooting script by George Romero

There is no slow build-up as in NIGHT OF THE LIVING DEAD or other more traditional horror films. DAWN OF THE DEAD begins in the middle of chaos – civilization as we know it is coming to an end, being destroyed by the zombie apocalypse – and the action continues non-stop throughout the entirety of the movie’s first act, until the characters arrive at the shopping mall (the Monroeville Mall near Pittsburgh) that is the movie’s principal location.

Unlike a typical screenplay, Romero’s script does not indicate camera angles or shot breakdown (how the action is divided into shots). Here is a typical Romero description:

Director Romero employs a rapid cutting style – no shot lasts longer than 6 seconds. Thus, in the movie, the action described above is broken down into at least a half dozen shots. If Romero had indicated every cut and angle in his shooting script, his screenplay would’ve been over 500 pages long!

There are four main characters in the film – Fran, the female protagonist, Steve, her boyfriend, Roger, a young SWAT officer, and Peter, another SWAT officer who is black. As described by film theorist Robin Wood:

“DAWN explores (and explodes) the two dominant couple relationships of our culture and its cinema: the heterosexual couple (moving inevitably toward marriage and its traditional male/female roles) and the male “buddy” relationship with its evasive denial of sexuality . . . . Hence, the channeling of Roger’s energies into violence and aggression, his uncontrolled zest in slaughter presented as a display for his friend. The true nature of the relationship can be tacitly acknowledged only after Roger’s death, in the symbolic orgasm of the spurting of a champagne bottle over his grave.”

While Romero’s screenplay stops far short of overt homoeroticism, it does acknowledge the special nature of Roger and Peter’s relationship:

The film is a mash-up of several genres. It begins as a truly horrifying horror/action film. Then, when the characters arrive at the shopping mall, elements of comedy are introduced and the film turns into a satiric allegory – the shopping mall taken over by zombies becomes a metaphor for dead-end consumer capitalism, materialism gone amok.

The zombies are essentially mindless consumers:

(still staring down through a bubble)

WHAT ARE THEY DOING?

WHY DO THEY COME HERE?

SOME KIND OF INSTINCT. MEMORY … OF WHAT THEY USED TO DO. THIS WAS AN IMPORTANT PLACE IN THEIR LIVES.

Yet the four principal human characters are also materialists. They revel in all the fancy consumer goods the mall provides to them once the zombies are at bay. The bikers who raid the mall during the film’s third act are consumers of another kind. The film criticizes the materialism of all its characters. As Peter comes to realize, observing the zombies’ behavior, “THEY’RE US.”

A scene that was supposed to take place in the mall’s pet shop was scrapped. In the screenplay, Fran has a pet puppy who plays an important role. In the movie, she does not.

A gag involving a zombie stuck in a revolving door was scrapped, probably because the mall where the film was shot did not have a revolving door. Much of the zombie action was fleshed out, so to speak, during the filming. For example, although the screenplay describes in some detail a scene where Fran, left by herself, is attacked by a zombie, it does not indicate (as we see in the film) that the zombie who attacks her is a Buddhist monk wearing a saffron robe!

The film adds an entire sequence not in the screenplay that takes place before we get to the mall, showing a band of beer-drinking, country music-playing rednecks, roaming the countryside shooting down zombies and having a great time while doing so. This could be (and is probably meant to recall) the same band of redneck hunters we saw at the conclusion of Romero’s first zombie movie, THE NIGHT OF THE LIVING DEAD, who mistakenly shoot the black hero of that film.

The sequence of the bikers raiding the mall has lots of additional business and “gags,” for example, the sombrero-wearing biker who is fatally fascinated by a coin-operated blood pressure monitor, the bikers hitting the zombies with pies. The biker sequence is only 9 pages of the screenplay but, as elaborated in the movie, it takes more than 17 minutes of screen time.

The movie ends much less pessimistically than the screenplay does.

The screenplay ends on a note of despair. Roger and Stephen die and become zombies who are, in turn, shot by their friends. Peter shoots himself, and Fran, pursued by zombies to the mall’s roof, allows herself to be decapitated by a rotating helicopter blade. This ending was actually shot but unused.

At the conclusion of the released film, Peter considers shooting himself, but changes his mind at the last second and escapes from the mall with Fran piloting the helicopter. Our old world order is clearly dead, but the escaping black man and pregnant woman, no longer in their traditional couple relationships, suggest the start of something new.