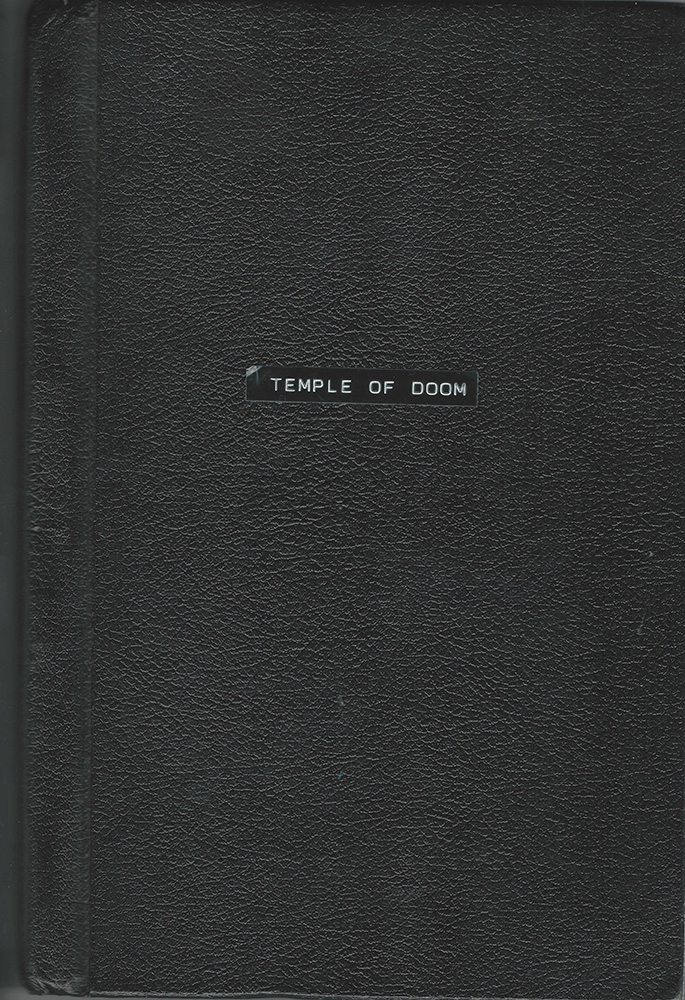 Vintage original script, with red rubber stamp watermark INDY 2 MAR22 00059 on the recto of each leaf. Mechanically reproduced, raised text, with one revision in original typescript. An extemely scarce screenplay.

A working script produced about one month prior to the commencement of shooting, which began on April 18, 1983. From the collection of cinematographer Carlos Gil.

The second film in the renowned Indiana Jones series, a dark prequel to the first installment, “Raiders of the Lost Ark.” Steven Spielberg spared no effort in making a breathlessly entertaining adventure film in the old style, utilizing a minimum of special effects. Pauline Kael called the film, “one of the most sheerly pleasurable films ever made,” and Roger Ebert deemed it, “not so much a sequel as an equal. It’s quite an experience.”

All four Indiana Jones films are based on stories written or co-written by producer George Lucas. For TEMPLE OF DOOM, Lucas hired screenwriting team Gloria Katz and Willard Huyck, who had previously written Lucas’s AMERICAN GRAFITTI, to write the screenplay adapted from Lucas’s treatment.

TEMPLE OF DOOM is essentially an exercise in pulp Orientalist fantasy, like Robert Siodmak’s COBRA WOMAN or Fritz Lang’s THE INDIAN TOMB. At the time of its release, TEMPLE OF DOOM was criticized for what many perceived to be offensive East Indian stereotypes. Even before shooting, Lucas and the film’s director, Steven Spielberg, were denied permission to shoot in Northern India due to the government finding the screenplay offensive.

This is understandable, given that the screenplay’s over-the-top East Indian villains are members of a human-sacrificing, child-enslaving Thugee cult who pull hearts out of people’s chests while worshipping Kali – a goddess who in the actual Hindu religion has both positive and negative aspects. Moreover, the screenplay’s “good” East Indians are backward villagers who look to Indiana Jones (Harrison Ford) as their white savior.

Additionally, the screenplay’s female lead, nightclub singer Willie Scott (played in the film by future Mrs. Spielberg, Kate Capshaw) is a collection of negative female stereotypes. In contrast to Marion Ravenwood (Karen Allen), the self-reliant Hawksian heroine of the first and fourth Indiana Jones films, TEMPLE OF DOOM’s Willie is a vain, gold-digging showgirl, an object of ridicule who complains constantly and screams at the slightest provocation. It isn’t until the story’s second half that she begins to show some positive qualities.

Notwithstanding the controversy surrounding the film and many critical reviews, TEMPLE OF DOOM went on to become the highest grossing movie of its year—and remains a beloved classic American movie of the 1980’s.

The principle differences between the screenplay and the movie are the “Spielberg-izing” of its first act which, not surprisingly, becomes the most enjoyable part of the completed film.

Willie’s song is not described in detail in the screenplay. In the movie, it becomes a rendition of Cole Porter’s “Anything Goes,” sung by Willie in Chinese (!) except for the “Anything Goes” refrain, and the basis for a Busby Berkeley-style production number elaborately staged by Spielberg and his team.

The screenplay immediately introduces Indiana’s child sidekick “Short Round” (named after a similar Asian child character in Samuel Fuller’s THE STEEL HELMET) sneaking into the club. In the film – an improvement – we do not meet him until Indy and Willie are escaping from the club. He is the child driver of their getaway car!

The battle in the club between Indy and Chinese gangsters – involving a diamond, a poisoned drink, and its antidote – is naturally elaborated upon in the film version which introduces a revolving “lazy Susan” on the nightclub table, by means of which the diamond, the antidote, and other valuables are exchanged before everything devolves into chaos.

In both the screenplay and the movie, Indy, Willie, and Short Round are captured while observing Thugee rituals in the Temple of Death/Doom, and Indy is forced to drink the “blood of Kali” which turns him into a zombie slave.

In the screenplay – which is even darker than the movie – there is an extended sequence, not in the film, where Willie is allowed to return to the Maharajah’s palace accompanied by zombie Indy (she does not know he is a zombie). He follows her into her bedroom where “he starts hissing grotesquely, smoke billows out of his mouth,” and his eyes start glowing “a hellish incandescent yellow.”

Spielberg must have learned something from the TEMPLE OF DOOM controversy. In an apparent attempt to make amends, the next film he directed was THE COLOR PURPLE (1985), which aspired to a black feminist viewpoint.