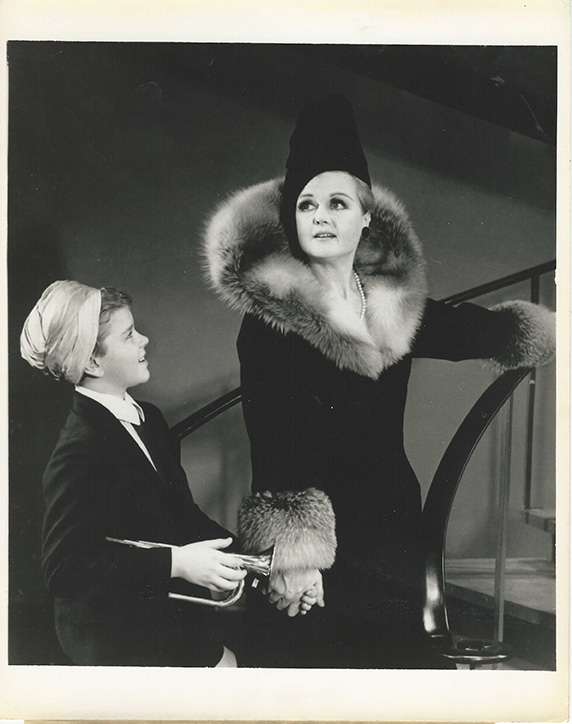 ANGELA LANSBURY IN MAME ON BROADWAY (1966)

Vintage original 8 x 10” (20 x 25 cm.) black and white single weight glossy silver gelatin print still photo, USA. Upon arriving from London in 1943, Angela Lansbury started her acting career as a leading character in the MGM film GASLIGHT. She was just 18 and for the next 20 plus years played a great variety of characters on film and television. She conquered Broadway in 1966 with MAME, the Jerry Herman musical based on the novel (and film) by Patrick Dennis, AUNTIE MAME. Written for Judy Garland (who sang the entire score at an audition), Lansbury was felt to be more able to endure the rigors of Broadway. She won the Tony Award for her performance and performed the role at the Winter Garden Theatre between May 24, 1966 and March 30, 1968. The musical role of Mame Dennis then became a plumb role for the middle aged actresses of the day with Celeste Holm, Ann Miller, Janis Paige, Ginger Rogers, Susan Hayward, Ann Southern and others taking it on in various productions. This image of Lansbury with Frankie Michaels as Patrick is from UPI and is stamped. The attached paper blurb is for the photo’s use in an article from 1/28/71. Minor wear. ABOUT FINE.