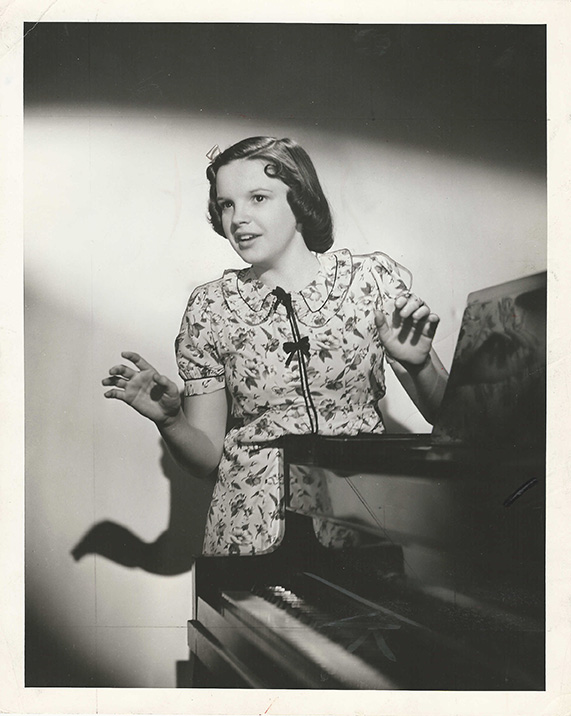 Vintage original 10 x 8” (25 x 20 cm.) black and white single weight glossy silver gelatin print still photo, USA. Robert Taylor, Eleanor Powell, George Murphy, Sophie Tucker, Buddy Ebsen, Judy Garland, dir: Roy Del Ruth; Metro-Goldwyn-Mayer. From March through July of 1937, Judy Garland was working on her first MGM feature production, BROADWAY MELODY OF 1937. She had appeared in several shorts for MGM and a feature at Twentieth Century Fox in 1936. Though she had signed with MGM in 1935, the studio was not sure what to do with her initially and groomed her slowly. Most of her first year was spent doing radio appearances so as audiences would become accustomed to the mature voice the 13 year old possessed. She signed a contract with Decca records on her own at the time. When, in Feb. 1937 she sang a special version of the song YOU MADE ME LOVE YOU to Clark Gable at his studio birthday party, executives felt that the piece was so outstanding that she needed to perform it in a feature and thus the role of Betty Clayton was created for the new Eleanor Powell starring vehicle. The film was renamed BROADWAY MELODY OF 1938 and publicized as being so NEW that it was a year ahead of its time! To promote her new feature, Garland at age 15 posed for a variety of portraits for famed photographer C. S. Bull. His ink stamp is on the verso as is a date of July 7, 1937 and pencil notations for magazine use. Another in date stamp or Jun 18, 1969 is also present for another publishing, which was just 4 days before her death. Show signs of use including light crop markings on the image, and light creasing at the four corners. Scratch to emulsion on piano music stand. VERY GOOD-FINE.