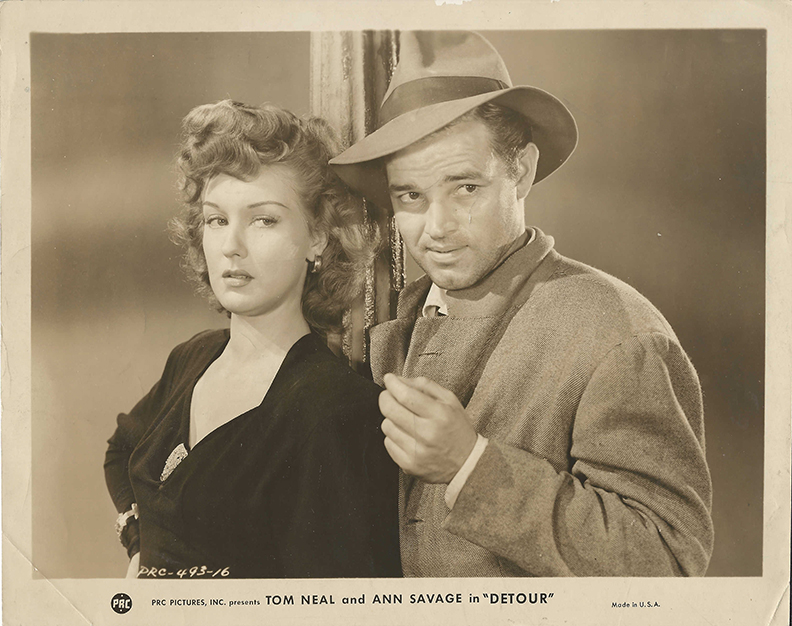 (2) Vintage original black and white single weight glossy silver gelatin print still photos, USA. Tom Neal, Ann Savage, Claudia Drake, Edmund MacDonald, Tim Ryan, dir: Edgar G. Ulmer. One of the best remembered titles in the film noir genre and one of the most effective in use of shadow, light and black and white photography. It had to use these elements as there was no budget. That shoestring budget (approximately $30,000 whereas DOUBLE INDEMNITY had a budget of nearly $1 million) enhanced the atmosphere. The film was made on basically two sets, inside a car against a rear projection screen, and inside a cheap apartment (there was one day of desert location shots done in Lancaster, CA). Director Edgar G. Ulmer claimed it was made in six days, even though the schedule originally called for 28 days. Ulmer did use his own car for the shoot. The story of a chance encounter when a hitchhiker accepts a ride to Los Angeles, the driver dies en route, and he assumes the dead manís identity. A woman who knew the dead man then blackmails him. Al Roberts (Neal) takes one bad turn after another. This was both the first Noir and ìBî film to be chosen for the Library of Congress National Film Registry. These two stills of the filmís stars were made for publicity purposes. The horizontal photo PRC-493-16 includes the PCR Studio credits at the bottom and has minor corner creasing and edge wear. The vertical photo PRC-494-15 has the original attached paper blurb on the verso and the dated Spt. 10, 1945 Hollywood Advertising Advisory Council ink stamp. Some wear at top right corner. ABOUT FINE.