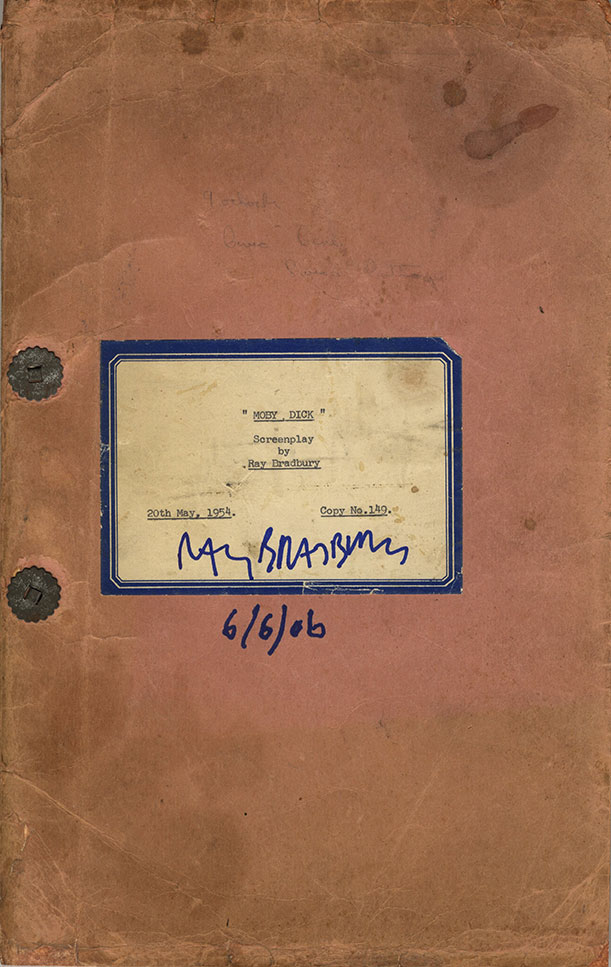 Ray Bradbury (screenwriter); Herman Melville (source) MOBY DICK Screenplay by Ray Bradbury 20th May1954. Folio, brad bound, mimeograph, printed plain wrappers with affixed typed label, approximately 135 pp. As often happens with film scripts when revisions are being added, some pages are out of order toward the end, but the script is intact, with the final page 135 giving the final shot of the film. There is staining and soiling to the wrappers. Towards the end, there is paper loss to the blank bottom margins of three pages, with no effect on any of the text. There are also some scattered marginal tears to a few additional pages. There is one underlining in an unknown hand. The script is signed and dated “Ray Bradbury 6/6/06” on the front wrapper. Overall, a very good- example of this exceedingly scarce script. In a handsome blue clamshell box.

The New York Times obituary for American author, Ray Douglas Bradbury (1920-2012), referred to him as “the writer most responsible for bringing modern science fiction into the literary mainstream.” Director John Huston (1906-1987) admired the poetic and allegorical qualities of Bradbury’s short stories and novels, notably The Martian Chronicles (1950), and, on the basis of those qualities, concluded that Bradbury would be ideally suited to adapt Herman Melville’s Moby Dick to the screen.

MOBY DICK was, in fact, Bradbury’s second foray into screenwriting. His first was the detailed original screen treatment for Jack Arnold’s IT CAME FROM OUTER SPACE (1953). However, MOBY DICK was Bradbury’s first fully developed screenplay, a screenplay that director Huston, a fine writer himself, helped to shape and revise. Like many of Huston’s best films (THE MALTESE FALCON, KEY LARGO, THE NIGHT OF THE IGUANA, REFLECTIONS IN A GOLDEN EYE, FAT CITY, WISE BLOOD), MOBY DICK is about the interactions of an eccentric ensemble within a circumscribed environment – in the case of MOBY DICK, it is Captain Ahab’s ship, the Pequod. Many of Huston’s characters are defined by their obsessions – the obsession of the characters in THE MALTESE FALCON with acquiring the falcon, the obsession of the prospectors in THE TREASURE OF SIERRA MADRE with discovering gold. Thus, Captain Ahab (Gregory Peck), defined by his obsession with finding and wreaking vengeance upon the white whale, is a prototypical Huston protagonist.

“I always thought Moby Dick was a great blasphemy. Here was a man who shook his fist at God. The thematic line in Moby Dick seemed to me, always, to have been: who’s to judge when the judge himself is dragged before the bar? Who’s to condemn, but he, Ahab!”

Protagonists who shake their fists at God are also a recurring motif in Huston’s films. Think of George C. Scott as Abraham in Huston’s THE BIBLE: IN THE BEGINNING or Hazel Motes as played by Brad Dourif in Huston’s WISE BLOOD. An interest in and love for animals is another Hustonian motif, for example, the African elephants in THE ROOTS OF HEAVEN or the wild mustangs in THE MISFITS. Huston was interested enough in whales and whaling to film footage of actual whalers at work for use in MOBY DICK. MOBY DICK is clearly among the most Hustonian of Huston films.

Bradbury spent seven months in Ireland working with Huston on the MOBY DICK screenplay, an experience that was the basis for his fictionalized memoir, Green Shadows, White Whale (1992).

For the most part, Bradbury’s screenplay is faithful to Melville’s novel, following Melville’s plot and incorporating Melville’s language into the film’s narration and dialogue whenever possible. (For a good example of this, see the way Bradbury and Huston handle the sermon of Father Mapple, performed by Orson Welles in the film.) One of Bradbury’s most significant additions to what Melville wrote occurs in the scene where close pals Ishmael (Richard Basehart) and Queequeg (Friedrich von Ledebur), on their way to the Pequod, encounter the Stranger (Royal Dano) who calls himself Elijah after the Biblical prophet. In the book, the Stranger delivers dire but vague warnings concerning Captain Ahab, but in Bradbury’s screenplay he makes a specific – and memorably mysterious – prophecy:

Listen. At sea one day ye’ll smell land where there be no land. And on that day, Ahab will go to his grave, but he will rise again within the hour.

To which the completed film appends the following lines:

He will rise and beckon. Then all – all save one – shall follow.

This is good screenwriting, creating suspense for the audience. Will the prophecy be fulfilled? And if so, how? Sure enough, near the film’s conclusion, the crew smells land where there is no land (It is Moby Dick who is huge enough to carry vegetation and other remnants of the land on his back). Captain Ahab personally attacks the white whale with his harpoon and dies, strapped by harpoon ropes to the whale’s back as it submerges, but within the hour the whale surfaces again with dead Ahab still strapped to its back, while the rolling motion of the whale causes Ahab’s arm to move as if beckoning the rest of the crew to follow him – which tragically they do – all save Ishmael.

In Green Shadows, White Whale, Bradbury explains how he solved another problem in the screenplay’s construction. To wit, late in Melville’s book, Queequeg, who is a Pacific Islander, becomes catatonic, anticipating his own death, foretold by the throwing of bones, and the book never explains how he emerges from that state. In Bradbury’s screenplay, some of the crew members sadistically provoke Queequeg, even cutting him with a knife, to see if he will emerge from his catatonia – to no avail. But when a crew member is about to murder Ishmael, that is sufficient to rouse Queequeg from his paralysis – such is the love of harpooner Queequeg for his shipmate.

Some literary critics, notably Leslie Fiedler, have commented upon what they perceive to be the homoerotic nature of the Ishmael/Queequeg relationship. In Bradbury’s screenplay, after Ishmael and Queequeg spend a night together at Peter Coffin’s Inn, Queequeg actually refers to the two of them as being “married.” There is no reference to marriage in the film’s revised bonding scene. Instead, Queequeg says, “Your boat, my boat. I eat same food. We sail on same waters. We kill same whale. We friends!”

Bradbury, a writer of fantasies, was particularly attuned to the fantastic and metaphysical elements he found in Melville’s story – the fulfillment of Elijah’s prophecy, the ship’s encounter with the glowing St. Elmo’s fire, and the whale itself seen as a kind of godlike supernatural monster.

Due to the problems of shooting on the water, Huston, in his autobiography, An Open Book, refers to MOBY DICK as “the most difficult picture I ever made.” Regardless, MOBY DICK is a great film, and its screenplay is a poetic work of art in its own right.

This is an enormously important, not to mention, scarce piece of film and literary history.