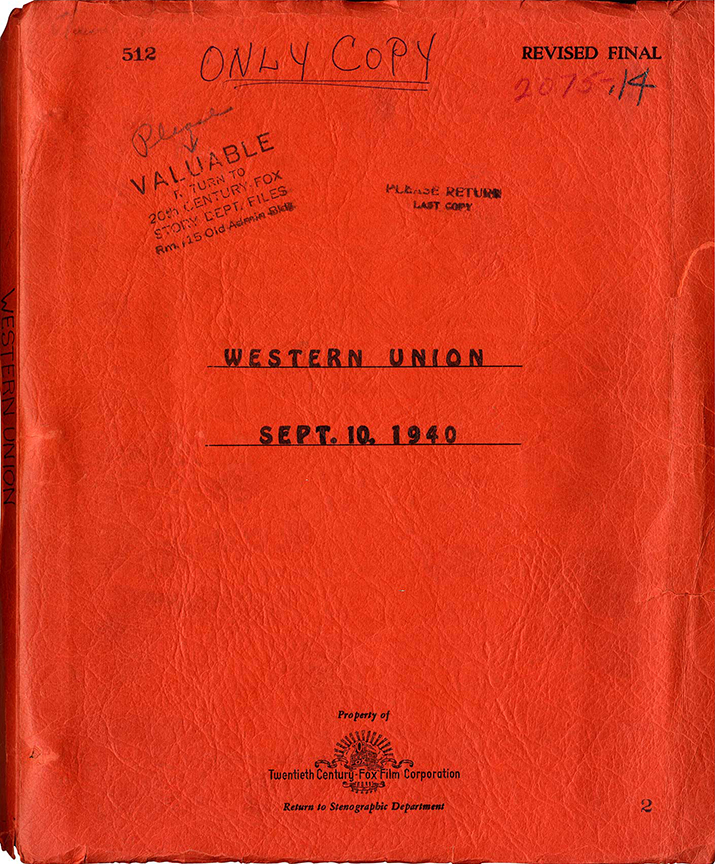 WESTERN UNION was one of the first Western movies to be shot in the three-strip Technicolor process, following directly on the heels of THE RETURN OF FRANK JAMES (1940), also shot in Technicolor, for the same studio, Twentieth Century Fox, and by the same director, Fritz Lang. According to a Wikipedia article on best-selling Western author, Zane Grey – the writer of the novel on which this movie was based – the success of Lang’s film, released shortly after Grey’s death, “helped bring about a resurgence in Hollywood Westerns.”

It was the fourth American film of Austrian-born director Fritz Lang (1890–1976), and, as noted, his second Western, and his second film in color. However, the movie’s subject matter – America’s expansion into the Western frontier by way of the telegraph wire – echoed the subject matter of some of Lang’s best known German silent films. Like Lang’s SIEGFRIED and KRIEMHILD’S REVENGE (1924), it was a meditation on national myth. Like his WOMAN IN THE MOON (1929), it celebrated the exploration of new frontiers.

For Twentieth Century Fox and producer Daryl Zanuck, WESTERN UNION was not only a follow-up to Lang’s successful THE RETURN OF FRANK JAMES, but also a kind of companion piece to the studio’s BRIGHAM YOUNG (Henry Hathaway, 1940). In BRIGHAM YOUNG, Dean Jagger played the title role, a charismatic figure who led a group of Mormon followers through the Western frontier to Utah. In WESTERN UNION, Dean Jagger plays a similarly charismatic historical figure, Edward Creighton (1820-1874), who led a gang of workers through the Western frontier in the 1860s, setting up the Western Union Company’s telegraph lines.

The film’s screenwriter, Robert Carson (1909-1983), won an Academy Award for co-writing the original story of William Wellman’s A STAR IS BORN (1937). Other significant credits include the screenplays of Wellman’s BEAU GESTE and THE LIGHT THAT FAILED (both 1939).

The story has two parallel plot threads. The first concerns the historical effort of setting up the company’s telegraph lines and the obstacles, Native-American and white, encountered by the crew as they move westward. The second is a romantic triangle – very much like the triangle in Lang’s WOMAN IN THE MOON – where a seasoned frontier scout (Randolph Scott) and an Eastern “dude” (Robert Young), more skilled with horses and guns than he initially appears, compete for the affections of Creighton’s sister (Virginia Gilmour). As in WOMAN IN THE MOON, one member of the triangle ends up making a noble sacrifice for the benefit of the collective enterprise.

The screenplay is heavily descriptive, and the film follows it virtually shot by shot. Lang’s architectural visual sense is evident throughout the movie, contrasting the horizontals of the natural location scenery with the verticals of the telegraph poles. New York Times critic Bosley Crowther called WESTERN UNION “one of the finest color films ever seen” and praised the movie’s “breath-taking shots of vast stretches of prairie across which the construction gang is seen drawing its tiny wire.”

While the movie follows Robert Carson’s screenplay quite closely, it is clear that some dialogue and scenes were cut to shorten the film’s running time or possibly because somebody decided they were overly technical for the film’s target audience, e.g., a scene where Blake (Robert Young) suggests covering the spools of telegraph wire so they don’t overheat in the sun and become hard to handle, or another where Blake figures out why some of the team’s batteries are losing their power.

Its historical background, including references to the ongoing Civil War, and its emphasis on growing America’s manifest destiny links WESTERN UNION to other cinematic examples of the “epic Western”, a sub-genre that began in 1924 with John Ford’s THE IRON HORSE (a film about the construction of the first transcontinental railroad), and continued with movies like CIMARRON (1931, remade in 1960), UNION PACIFIC (De Mille, 1939), HOW THE WEST WAS WON (1962), CHEYENNE AUTUMN (Ford, 1964), Sergio Leone’s ONCE UPON A TIME IN THE WEST (1969), and, more recently, Michael Cimino’s HEAVEN’S GATE (1980).