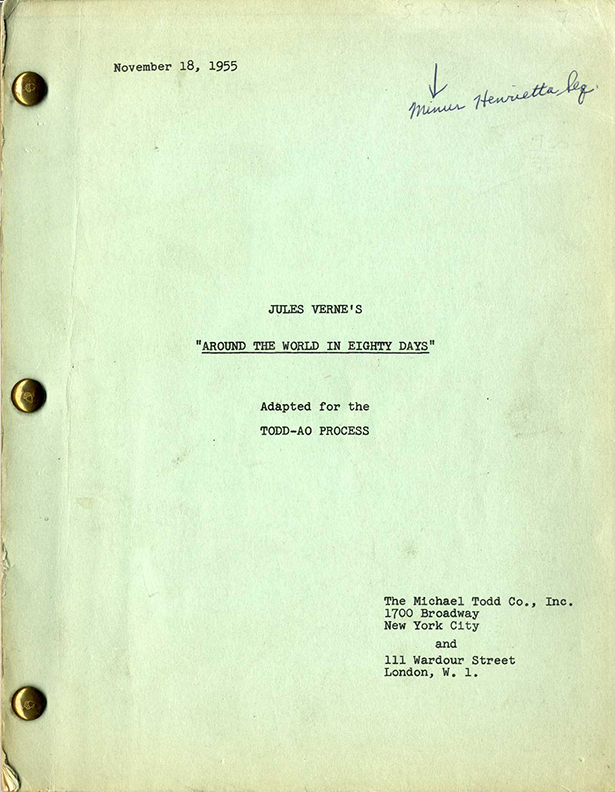 Copy #31 of this unspecified pre-production draft of this award-winning adaptation to the screen of Verne’s novel. This film was the last of Perelman’s screen credits over a quarter of a century’s work. The early ink note on the upper wrapper indicates “Minus Henrietta Seq” but the script collates as complete through “The End” and includes an additional 4 leaf appendix at the end.

Brooklyn-born S.J. Perelman (1904-79) was chiefly known as a humorist, writing short pieces for The New Yorker and other magazines, but he was also a Broadway playwright (ONE TOUCH OF VENUS, THE BEAUTY PART), and occasional screenwriter/script doctor, co-writing the Marx Brothers’ MONKEY BUSINESS (1931) and HORSE FEATHERS (1932), as well as this film.

Born in Dobbs Ferry, New York, James Poe (1921-80) was a radio, television and film writer. His best known screenplays, apart from this movie, are THE BIG KNIFE (1955), adapted from a play by Clifford Odets, ATTACK! (1956), also adapted from a play, the screen adaptations of Tennessee Williams’ CAT ON A HOT TIN ROOF (1958) and SUMMER AND SMOKE (1961), LILIES OF THE FIELD (1963), and his Academy Award-nominated screen adaptation of Horace McCoy’s novel THEY SHOOT HORSES, DON’T THEY? (1969). He had to sue for his credit on AROUND THE WORLD IN 80 DAYS.

An educated guess with respect to who did what would credit Farrow with the screenplay’s narrative construction, Poe with the drama and Perelman with the humor. Considering the consistently sharp wit of its dialogue and descriptive passages, this particular draft – very close to the completed film – was almost certainly the work of S.J. Perelman.

One significant difference between the screenplay and the completed film – the film begins with a 5-minute prologue about the visionary Jules Verne, narrated by Edward R. Murrow, during which we see an edited version of George Méliès’s 1902 short film, A TRIP TO THE MOON (Le Voyage dans la Lune), inspired by the work of Verne and fellow visionary H.G. Wells. The square-formatted Méliès film also creates a nice contrast when the movie opens up to widescreen 70 millimeter Todd-AO.

The screenplay, on the other hand, begins immediately in Victorian London, introducing us to a “Little Man”, Passepartout (played in the film by Mexican comedian Cantinflas), riding a bicycle with a comically large front wheel, who will soon become the valet and sidekick of the film’s principal character, the quintessentially British Phileas Fogg (David Niven). Once the plot-motivating wager is placed (Can Fogg travel around the 19th century world back to London in only 80 days?), a third main character is introduced, Scotland Yard Detective Fix (Robert Newton) who, for dubious reasons, will pursue Fogg and his valet throughout the entirety of their spectacular journey. Eventually, for romantic interest, they are joined by an escaping Indian princess (Shirley MacLaine). It’s a clever structure that can and does encompass thrill sequences, scenic travelogue footage, comic digressions and amusing star cameos by a “cast of hundreds”.

Some of the star cameos are even indicated in the screenplay. Example:

As Fogg and Passepartout emerge and approach a row of carriages at curb, Passepartout reacts as a pretty wench (MARTINE CAROL) crosses before him.

PASSEPARTOUT
Ah! Excuse me – my cousin.

He exits toward the girl. Fogg boards the carriage nearest him. From O.S. is heard the noise of a ringing slap and Passepartout reenters, nursing his jaw.

PASSEPARTOUT
(entering the carriage)
It wasn’t my cousin.

The CAMERA PULLS BACK to disclose the cabman (FERNANDEL) seated on the box of the fiacre, nodding somnolently.

The differences between this screenplay draft and the completed film are minimal. Whereas in this draft, the sequence that introduces Passepartout comes before the sequence that introduces Phileas Fogg, in the completed film their order is reversed. Otherwise, apart from a few minor deletions of dialogue and bits of business, this might have been the final shooting script.

Note that the movie’s most iconic image, the hot-air balloon, is not employed as a means of transportation in Verne’s novel. It derives instead from an earlier Verne work, FIVE WEEKS IN A BALLOON (Cinq semaines en ballon, 1863). Other modes of transportation that appear during the course of the narrative include steamship, train, ostrich (ridden by the acrobatic Cantinflas), and elephant.

AROUND THE WORLD IN 80 DAYS is one of the most Anglophilic movies ever made, a 182-minute celebration of British character and (anachronistically) British Imperialism. How ironic that its principal creators were Todd, a producer from Minneapolis, and Perelman, a Jewish-American writer from Brooklyn, based on the work of a 19th century novelist from France.