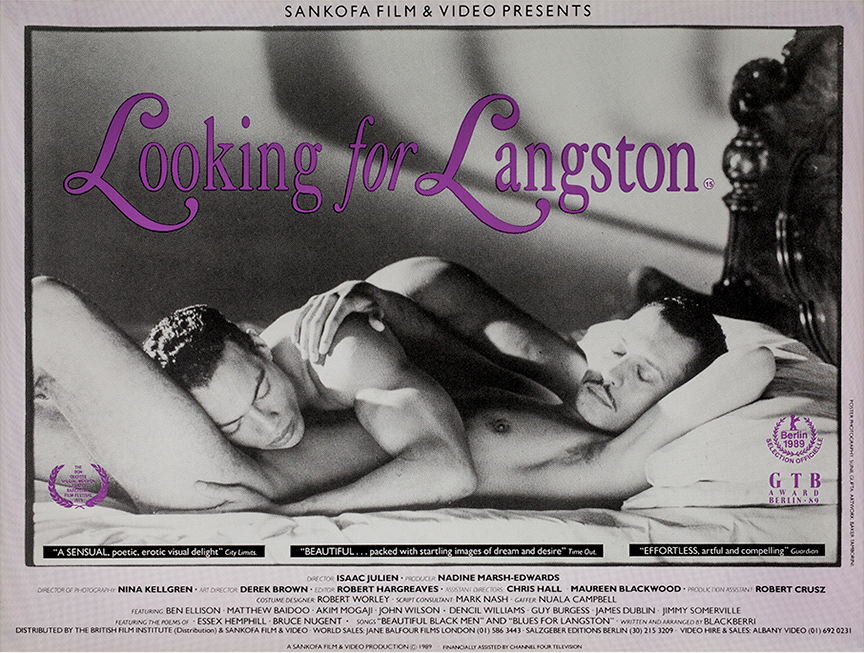 “It combines authentic archival newsreel footage of Harlem in the 1920s with scripted scenes to produce a non-linear impressionistic storyline celebrating black gay identity and desire during the artistic and cultural period known as the Harlem Renaissance in New York.

“The film is not a biography of Langston Hughes. It is a memoriam to Hughes and the Harlem Renaissance as reconstructed from a black gay perspective. Moreover, it purports to be a meditation on the black gay experience within a historical context built around the homophobia, oppression and denial faced by men of African descent within black communities alongside ‘allusions and political commentary on white racism.’

“Hughes is presented as an icon and cultural metaphor for black gay men who were confronted with being ostracized if they did not conform to black bourgeoisie standards whose overriding goal concerned fuller social integration. Contested are the ways the black male and his sexuality have been represented in the modern Western world and how existing notions of race and gender figure within American and African-American culture.

“Throughout this process, the identity of Hughes as a black gay man is reclaimed and no longer denied, a process paralleled in the ever-growing academic studies of Hughes today.[4][5] Moreover, adding to the historic and cinematic importance of the film in gay cinema, Looking for Langston was and continues to be one of very few films showing intra-racial affection between black gay men as revealed in the love story between the two leading black protagonists, Ben Ellison as Langston Hughes and Matthew Baidoo as Beauty.

“Upon the first release of Looking for Langston in the United States in 1990, the estate of Langston Hughes initially attempted to have the film censored because of copyright violations: permission allegedly had not been obtained by the filmmakers permitting them to use the poetry of Hughes in the film. During subsequent screenings of Looking for Langston, the sound was repeatedly turned down when the work of Hughes was read.

“Despite allegations of censorship from critics at the time of the U.S. premier of the film, the estate had allowed many of Hughes’ poems to appear in gay anthologies in the print media and continues to do so until this day.[vague] Today it falls under the auspices of the British Film Institute as part of its national “Black World” initiative celebrating black creativity in film.” (Wikipedia)

LOOKING FOR LANGSTON had an extremely limited theatrical release in the U.K., the country where the film was made, and there was a very small number of posters printed for it. This poster is encountered very infrequently.