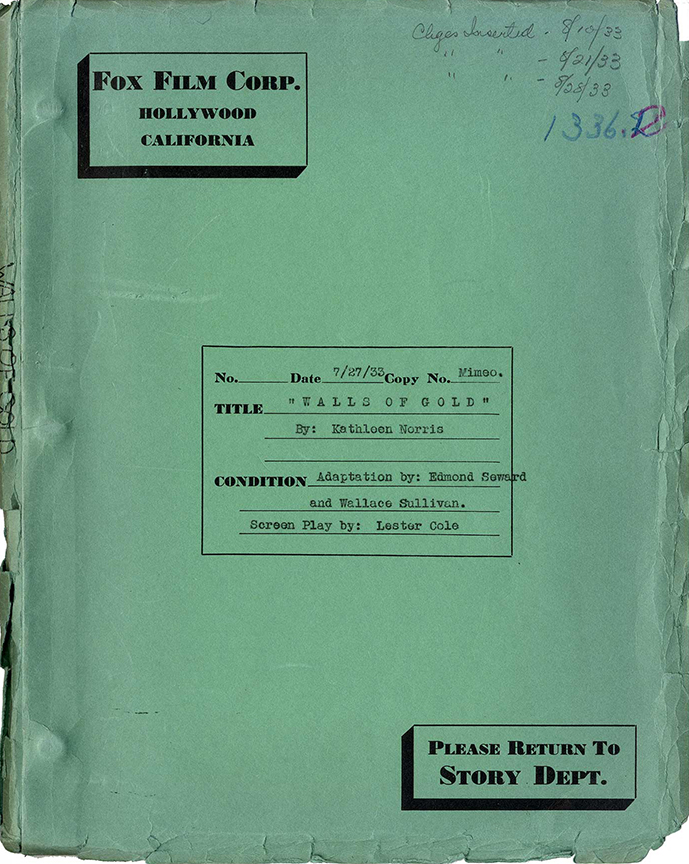 Hollywood: Fox Film Corp., 27 July – 28 August 1933. 96 leaves. Quarto. mimeographed typescript, bradbound in studio wrappers. Overlap edges and spine covering of wrappers a bit snagged and torn, relevant annotations on upper wrapper, very good.
An unspecified draft of this screenplay by Cole, based on an adaptation of
Norris’s novel by Edmond Seward and Wallace Sullivan. A pencil list on the
upper wrapper indicates the dates at which revisions were incorporated over
the span noted above. Kenneth MacKenna directed the October 1933 release,
starring Sally Eilers, Norman Foster, et al. Cole was one of the cofounders
of the Screen Writers Guild, and in 1934 joined the CPA.  Like his other
colleagues known as the “Hollywood Ten,” Cole refused to cooperate with the
HUAC in 1947, was sentenced to a year in prison and a fine, and was placed
on the Blacklist. He continued to work sporadically under pennames, and his
last major film, BORN FREE, was so credited. WALLS OF GOLD is the third
writing credit ascribed to him by the IMDB.