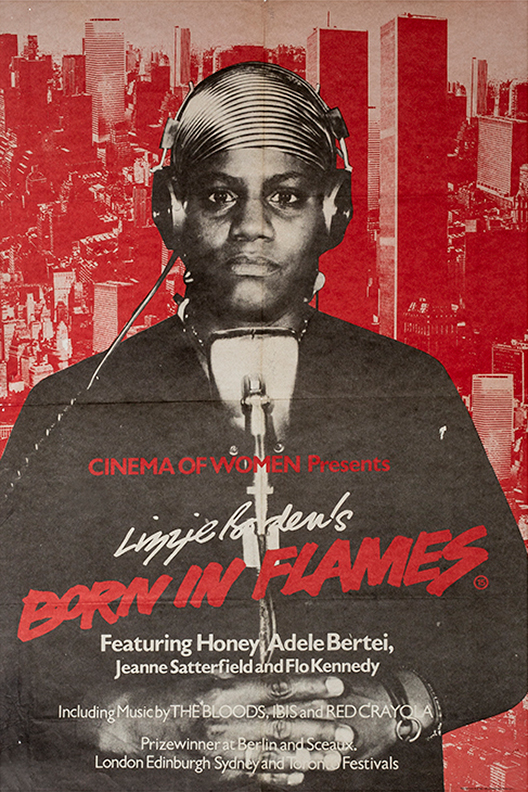 Vintage original 30 x 20” (76 x 51 cm.) poster, UK.  Honey, Adele Bertei, dir: Lizzie Borden; Cinema of Women.  London: Cinema of Women, 1983. Folded (as issued), with small tears, marginal chips, and signs of light handling, very good-.
An exceedingly scarce poster from a landmark film in 1980’s LGBTQ and African American film history.
“A documentary-style feminist fiction film by Lizzie Borden that explores racism, classism, sexism, and heterosexism in an alternative United States socialist democracy.
“The plot concerns two feminist groups in New York City, each voicing their concerns to the public by pirate radio. One group, led by an outspoken white lesbian, Isabel (Adele Bertei), operates ‘Radio Ragazza’. The other group, led by a soft-spoken African-American, Honey (Honey), operates ‘Phoenix Radio. ‘The local community is stimulated into action after a world-traveling political activist, Adelaide Norris (Jean Satterfield), is arrested upon arriving at a New York City airport, and suspiciously dies while in police custody. Also, there is a Women’s Army led by Hilary Hurst (Hilary Hurst) and advised by Zella (Flo Kennedy) that initially both Honey and Isabel refuse to join. This group, along with Norris and the radio stations, are under investigation by a callous FBI agent (Ron Vawter). Their progress is tracked by three editors (Becky Johnston, Pat Murphy, Kathryn Bigelow) for a socialist newspaper, who go so far they get fired.
“The story involves several different women coming from different perspectives and attempts to show several examples of how sexism plays out on the street, and how it can be dealt with through direct action. At one point, two men attack a woman on the street, and dozens of women on bicycles with whistles come to chase the men away and comfort the woman. The movie shows women, despite their various differences, organizing in meetings, doing radio shows, creating art, wheatpasting, putting a condom on a penis, wrapping raw chicken at a processing plant, etc. The film portrays a world rife with violence against women, high female unemployment, and government oppression. The women in the film start to come together to make a bigger impact, by means that some would call terrorism.
“Ultimately, after both radio stations are suspiciously burned down, Honey and Isabel team up and broadcast “Phoenix Ragazza Radio” from stolen U-Haul vans. They also join the Women’s Army, which sends a group of terrorists to interrupt a broadcast of the President of the United States proposing that women be paid to do housework, followed by bombing the antenna on top of the World Trade Center to prevent additionally destructive messages from the mainstream.
“Greg Baise of the Metro Times called it ‘an early ’80s landmark of indie and queer cinema.’ The film has had experienced somewhat of a renaissance after the 35mm restoration print premiered in 2016 at the Anthology Film Archives. Richard Brody of The New Yorker wrote, ‘the free, ardent, spontaneous creativity of Born in Flames emerges as an indispensable mode of radical change—one that many contemporary filmmakers with political intentions have yet to assimilate.’ He also wrote, ‘Borden’s exhilarating collage-like story stages news reports, documentary sequences, and surveillance footage alongside tough action scenes and musical numbers; her violent vision is both ideologically complex and chilling.’ Melissa Anderson of The Village Voice wrote ‘this unruly, unclassifiable film — perhaps the sole entry in the hybrid genre of radical-lesbian-feminist sci-fi vérité — premiered two years into the Reagan regime, but its fury proves as bracing today as it was back when this country began its inexorable shift to the right.'”