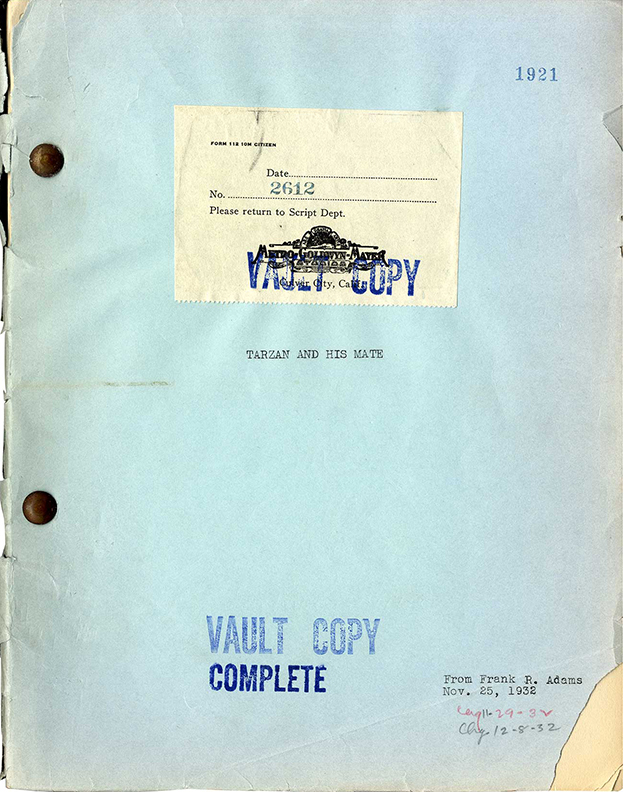 (Pre-Code Cinema)  TARZAN AND HIS MATE From Frank R. Adams  Vintage original film script.  Hollywood: MGM< Nov. 25, 1932 (with handwritten note indicating that the script incorporates changes done on 11-29-32 and12-8-32)Quarto, printed wrappers, brad bound, mimeograph, 125 pp.  Yapped wrappers are heavily chipped at edges, with wear at spine.  Near fine in good+ wrappers.
[offered with]:
TARZAN AND HIS MATE Miscellaneous notes.  Hollywood: MGM: “From 3-8-33 thru 3-14-34.”  Archive of notes about the evolving script and production issues.  Approximately 300 pp., with a mix of mimeographed pages and onionskin typescripts, these on white and yellow paper.  Brad bound, printed wrappers, quarto, some occasional light marginal creasing to pages, near fine.
TARZAN AND HIS MATE has long been considered one of the greatest examples of pre-Code Hollywood cinema, with its frequent scenes of very scantily clad heroine Jane, along with the clear indication that she is sleeping with Tarzan, although they are not actually married.
This is one of apparently three different early drafts of the film which MGM assigned to different writers—in this case, to Adams, who had already had an extensive career both as screenwriter and novelist.  The eventual film was credited to James Kevin McGuinness.  The film went through a complicated evolution both prior to and during its production.  The new, and highly censorious Hollywood Production Code came into effect the same month as that of the film’s release— April, 1934.
The bound volume of production notes include contributions from all three of the men who directed parts of the film—Jack Conway, James McKay, and Cedric Gibbons (to whom the film was eventually credited)—and twenty-six other MGM executives.
This constitutes a study collection on this historically important film.      1,250.00