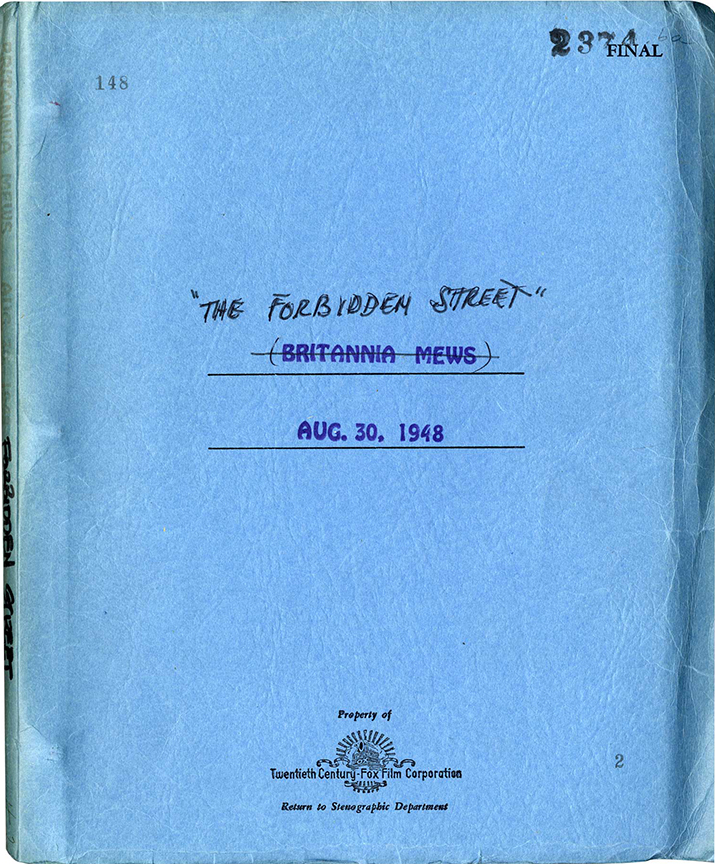 The film was released the following May, starring Dana Andrews, Maureen O’Hara and Sybil Thorndike under the direction of Jean Negulesco. Lardner was likely at work on this script in the months preceding his call, on 30 October 1947, to testify before the House Un-American Activities Committee (HUAC). He had been discharged by 20th Century-Fox just days before his appearance and, like many of the other uncooperative witnesses associated as the Hollywood Ten, he was sentenced to a term in prison. Given his status as the most highly paid studio writer in Hollywood prior to his dismissal, it seems clear that Fox had little desire to set aside their investment in this film’s script as easily as they set aside the man, as it continued to bear his name.

FORBIDDEN STREET is a moody costume film set in the Victorian era, with clear noirish overtones.

“From a well to do family, Adelaide (Maureen O’Hara), over the objections of her family, marries an impoverished artist Henry Lambert (Dana Andrews) who is later killed in an accident when Adelaide pushes him away. Adelaide is blackmailed for two years by her neighbor, Mrs. Mounsey, a spiteful old hag (Sybil Thorndike) who claims to the police that Henry was killed accidentally.

“Adelaide is still living in the Britannia Mews, when a young barrister, Gilbert Lauderdale (Dana Andrews), shows up who is the living image of Adelaide’s late husband. He gets rid of the old woman by threatening to prosecute her for blackmail, eventually reunites Adelaide with her family, and along the way falls in love with her himself.” (wikipedia)

Screenwriter Ring Lardner, Jr. (1915-2000) served a year in prison as one of the original Hollywood Ten. He wrote or co-wrote the screenplays of George Stevens’ WOMAN OF THE YEAR, Fritz Lang’s CLOAK AND DAGGER, Otto Preminger’s FOREVER AMBER, Joseph Losey’s THE BIG NIGHT (uncredited due to being blacklisted) and Norman Jewison’s THE CINCINNATTI KID, among many others. He was eventually honored with an Academy Award for his screenplay for Robert Altman’s MASH.