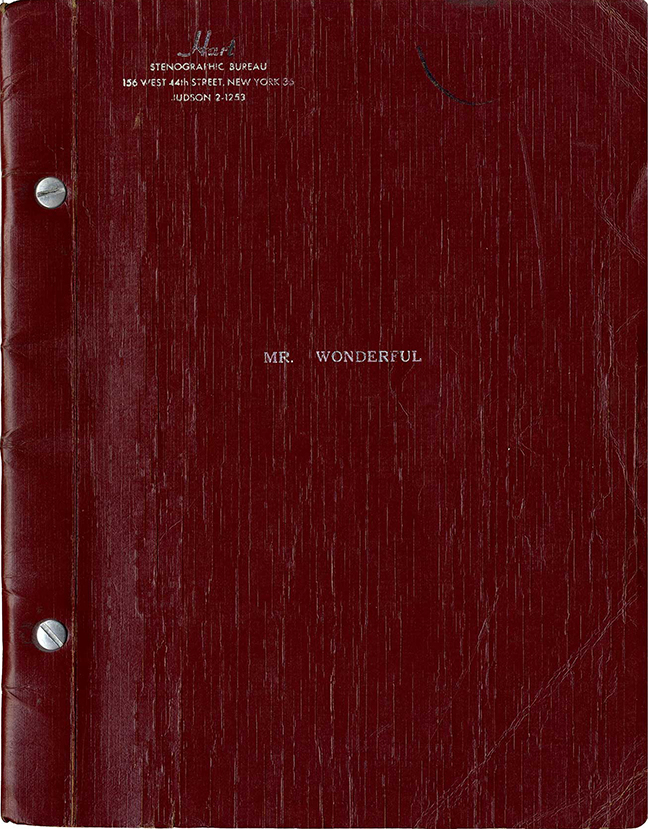 New York, 1956. Quarto, vinyl wrappers, spiral bound, 55, 24, 3 pp.  Mimeographed, the wrappers show considerable creasing, there are some scattered stains inside, and one page has a very noticeable tape stain in blank right margin. There are a few scattered doodles, and a few manuscript notes.  A few handwritten revisions are present, especially some lengthy notes in red ink next to the opening lyrics of the song “Jacques D’Iraque.”  Overall, very good+ in good+ wrappers.
This is the script of the musical which served as Sammy Davis Jr.’s Broadway debut.  It contained the song “Too Close for Comfort,” which became one of Davis’ signature songs, and the show was a personal triumph for Davis.
Wikipedia: “Mr. Wonderful is a musical with a book by Joseph Stein and Will Glickman, and music and lyrics by Jerry Bock, Larry Holofcener, and George David Weiss.
“Written specifically to showcase the talents of Sammy Davis, Jr., the plot, focusing on entertainer Charlie Welch’s show business struggles, primarily served as a springboard for an extended version of Davis’s Las Vegas nightclub act.
“The Broadway production, staged by Jack Donohue, opened on March 22, 1956 at The Broadway Theatre, where it ran for 383 performances. In addition to Davis, the cast included his father Sammy Sr. and uncle Will (who together with Davis had performed as the Will Mastin Trio), Jack Carter, Chita Rivera, Malcolm Lee Beggs, and Marilyn Cooper. The play closed on February 23, 1957.”