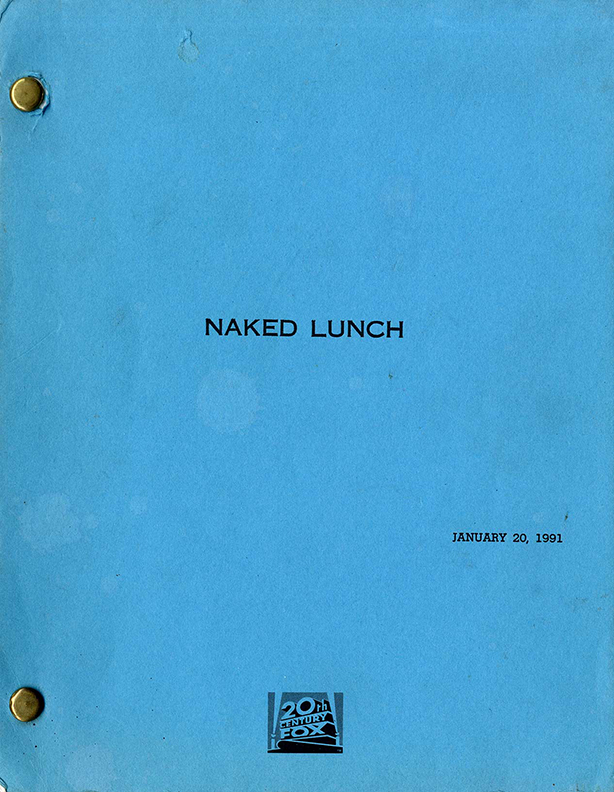 [Hollywood]: 20th Century Fox, January 20, 1991.   Quarto, printed wrappers, brad bound, 95 pp.  Front brad has detached, there is some minor wear to wrappers, title labeled on spine, near fine in vg wrappers.
David Cronenberg’s adaptation of Burroughs, to date a wildly controversial film, which incorporates elements not only of NAKED LUNCH, but also of  QUEER and other Burroughs works.
Canadian writer/director David Cronenberg (born March 15, 1943) once said that the obscenity and phantasmagoric stream-of-consciousness imagery of the novel, NAKED LUNCH, by American author, William S. Burroughs, would make a literal adaptation of the book virtually impossible to film.  Assuming one even had the stratospheric budget needed to undertake such a project, “it would have to be animated.”
Instead, Cronenberg’s masterfully inventive screen adaptation of NAKED LUNCH takes a radically different approach.  Just as Burroughs used the “cut-up” method in his literary works, Cronenberg’s film version is a kind of “cut-up” of several Burroughs fictions – NAKED LUNCH, EXTERMINATOR, INTERZONE, QUEER, and JUNKIE – interspersed with the people, places, and events of Burroughs’ real life.
For example, Cronenberg’s NAKED LUNCH screenplay opens with a knock on the door on the door of a “WORKING CLASS APT.” New York City, 1953 —

“The door is opened by a matronly Irish lady, MRS. MURPHY, to reveal LEE, who is working as an exterminator.  Lee is tall, gaunt, 35, suit, tie, hat, exterminating canister and associated paraphernalia.”

This scene is inspired by Burroughs’ short work, EXTERMINATOR, describing a time in Burroughs’ life when he exterminated insects for a living.  Bill Lee, played in the film by Peter Weller, is Burroughs’ fictional alter ego.
Following the bug-spraying scene at Mrs. Murphy’s apartment, a scene at the extermination office where Bill complains his bug powder has been diluted, and a scene at a “greasy spoon” diner where Bill meets with his friends, Mark and Martin (based on Burroughs’ real life Beat writer friends, Jack Kerouac and Allen Ginsberg), Bill returns home to find that his wife, Joan (based on Burroughs’ real life wife, Joan Vollmer) has been shooting up his bug powder to get high.  “It’s a Kafka high,” she says, “You feel like a bug.  Try some.”

Note that Burroughs’ wife does not appear in the NAKED LUNCH novel.  Neither do Kerouac or Ginsberg.  Likewise, the substance of choice in the NAKED LUNCH novel is not “bug powder,” but heroin, the buying, selling, and usage of which is discussed by Burroughs at great length.
In short, Cronenberg’s NAKED LUNCH screenplay and movie is not so much an adaptation of Burroughs as it is a very Cronenbergian fantasy inspired by the life and themes of William Burroughs, addressing three themes in particular.

Unlike the very real heroin of Burroughs’ writings, all of the drugs in Cronenberg’s screenplay are fantasy creations.  Bill and Joan in the movie start out by abusing bug powder (providing the filmmaker an excuse to visualize some extreme bug-inspired hallucinations).  The bug powder market is overseen in the movie by a character from Burroughs’ fiction, Dr. Benway (played in the film by Roy Scheider), and we are eventually shown factories in the North African “Interzone” where the powder, aka “the black meat,” is manufactured through the grinding up of centipedes.  Later, when Bill meets (or hallucinates) his grotesque extraterrestrial controller, the “Mugwump,” Bill graduates to a stronger drug obtained by milking the penis-like appendages on the alien’s back.

Where the sex in Burroughs’ fiction is largely homosexual, the sex in Cronenberg’s film is pansexual.  Early in the screenplay, Bill witnesses a ménage-a-trois involving his wife and his friends, Mark and Martin.  When Bill travels to the Morocco-like Interzone, he meets a couple of American writers, Tom and Joan Frost (inspired by real-life writers Paul and Jane Bowles), and he has an affair with Mrs. Frost (played in the movie by Judy Davis, the same actress who plays Bill’s wife), and she in turn is the lover/slave of a mysterious North African woman, Fadela.  When Bill is at his lowest point, he is rescued and cared for by an Arab boy, Kiki, who becomes his lover – the film’s most tender relationship.  However, that relationship turns sour when Bill takes Kiki to the home of a decadent European, Yves Cloquet (Julian Sands), whom Bill ultimately sees as a centipede-like monster raping Kiki in a giant parrot cage.

The Act of Writing

Most of the characters in Cronenberg’s NAKED LUNCH are writers, obsessed with their instruments of writing, their typewriters, often seen as part machine/part organic (the melding of the mechanical and the organic is a recurring Cronenbergian motif).  Tom Frost loans his typewriter to Bill, but it turns into a menacing bug, and Bill smashes it.  Later, Bill’s typewriter becomes the head of an alien Mugwump which Bill writes with by inserting his fingers into the creature’s mouth.  Burroughs was notorious for accidentally shooting and killing his wife at a party while playing “William Tell.”  He later wrote that he would not have become a writer, but for that horrendous act.  That incident is recreated twice in Cronenberg’s screenplay, the second time at the narrative’s conclusion (as Bill enters a new unknown country), a metaphor apparently for all that was destroyed and sacrificed in the creation of William Burroughs, Writer.

Except for a few dialogue cuts, this Fifth Draft screenplay is virtually identical to the completed movie.  Cronenberg films what he writes.  Again, it would be a mistake to view Cronenberg’s NAKED LUNCH as a mere adaptation of Burroughs’ novel.  What the Cronenberg screenplay is, in fact, is a brilliantly executed commentary and companion work.