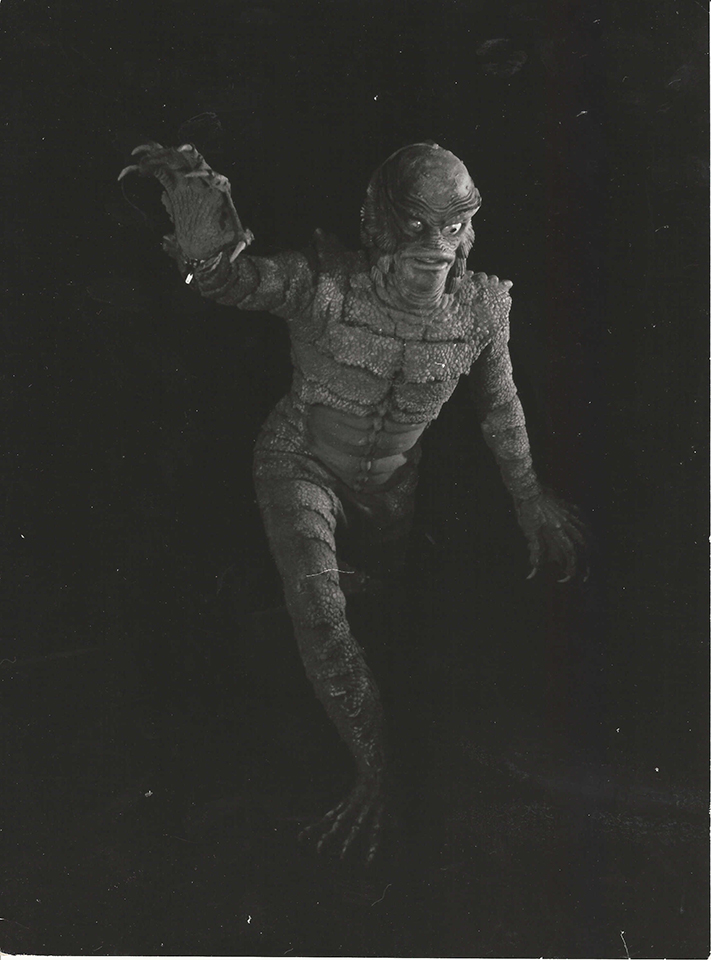 Vintage original 8 x 10 (20 x 25 cm.) black and white single weight glossy silver gelatin print still photo, USA. Richard Carlson, Julie Adams, Richard Denning, Antonio Moreno, Ricou Browning, Ben Chapman, dir: Jack Arnold: Universal. Here is 6′ 5″ Ben Chapman making a photographic test as the famous Creature. Chapman was born in Oakland, California, while his Tahitian parents were on a trip to the United States. He was raised in Tahiti, relocated to the U.S. in 1940 and went to school in the Bay Area of San Francisco. Working as a Tahitian dancer in nightclubs led to his first movie job, a bit in MGM’s “Pagan Love Song” (1950); other small film roles followed before Korean War duty temporarily sidetracked his modest screen career. Talent scouts from Universal-International “discovered” Chapman upon his return, and for a year he became a U-I stock player–and, at six-foot-five, an ideal choice for the finny title role in Jack Arnold’s Creature from the Black Lagoon. Chapman played the creature in all scenes while on land while Ricou Browning, a much smaller actor played the role in the water scenes. The costumes were distinctly different particularly in the treatment of the torso section and the head. Uncredited Milicent Patrick is believed to have been the designer of the final Creature appearance. This photo appears to be an on set photo test image. A classic of the 1950’s horror/monster genre, Photo is borderless. ABOUT FINE.