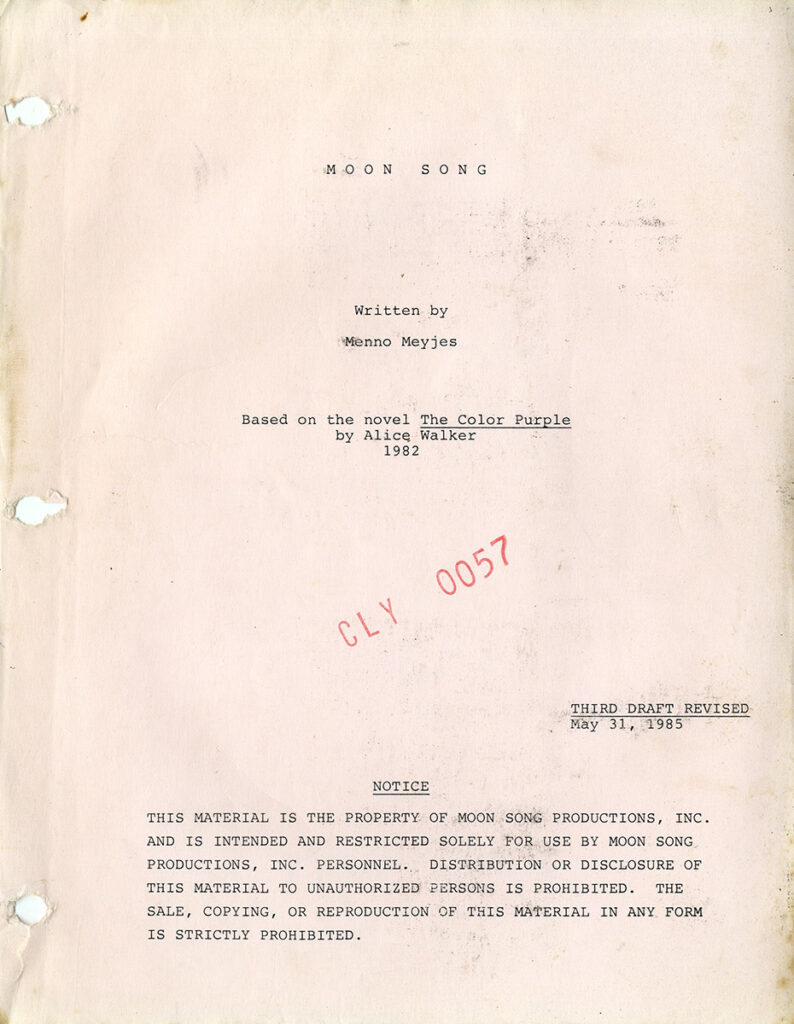 Alice Walker’s THE COLOR PURPLE, published in 1982, was the first work of fiction by an African-American woman to win the Pulitzer Prize. Walker’s story of a black girl growing up in the Deep South in the early 1900s garnered almost universal critical acclaim, and before long, film rights to the book were purchased by executive producers Jon Peters and Peter Guber who hired black composer and music impresario Quincy Jones to produce the movie. Jones, in turn, hired Steven Spielberg, fresh off the critical and popular success of E.T. THE EXTRATERRESTRIAL, to direct it.

THE COLOR PURPLE was a landmark film in many respects, one of the most ambitious and successful movies about African-Americans made up to that time, with a nearly all-black cast and, pursuant to a contract stipulation with author Alice Walker, a 50% black production team. The film was also radical for its time in the way it dealt with LGBTQ themes, specifically, the romance between Celie, the protagonist, and the black female blues singer, Shug Avery. It marked the feature acting debuts of Whoopi Goldberg as Celie, and Oprah Winfrey as Sofia.

It was a landmark film for director Spielberg as well, his first serious non-genre movie or, as Spielberg himself put it, his first “adult” film. However, it is very much a Spielberg movie in the way it foregrounds one of his principal thematic obsessions, the separation of children from their families–a motif we see in films as varied as CLOSE ENCOUNTERS OF THE THIRD KIND (child abducted by aliens), EMPIRE OF THE SUN (child separated from his parents by war), and CATCH ME IF YOU CAN (teen son separated from his parents by divorce). Less obviously, it deals with another major Spielberg theme, the acceptance of the Other (see E.T.).

The screenwriter Menno Meyjes was born in the Netherlands in 1954. THE COLOR PURPLE was his feature debut, his only previous writing credit being for an episode of the Spielberg-produced television series AMAZING STORIES, “The Mission,” directed by Spielberg himself.

THE COLOR PURPLE was a particularly brutal coming-of-age story, beginning with the impregnation of a 14-year-old black girl by her father, who then gives her away as a wife to the cruel and bullying “Mister.” It’s a story of self-realization over a period of decades, with the protagonist Celie finally gaining the strength, with the help of Shug Avery and other black women, to break away from “Mister” and create a life for herself, reuniting with her sister and the children that were taken from her at the story’s conclusion. What makes Walker’s novel particularly challenging to a would-be adapter is that it is written entirely in the form of letters–at first, from Celie to God, later, from Celie’s sister Nettie in Africa to Celie, and from Celie to Nettie.

The first big difference one notices between the 4/12/85 screenplay draft and THE COLOR PURPLE movie is that the movie begins with a sequence of young Celie and her sister Nettie happily running through a field of purple flowers. This scene is not in the 4/12/85 draft, which starts directly with the scene of 14-year-old Celie in a darkened room giving birth.

The title on this draft is MOON SONG. According to Oprah Winfrey, this title was intentionally deceptive–so that actors who read for parts in the project wouldn’t know they were reading for a film based on THE COLOR PURPLE (unless, like Oprah, they were familiar with the book).

Meyjes’s screenplay doesn’t entirely abandon the letters-to-god format of the novel, but incorporates the language of the letters into the film as Celie’s voiceover narration:

Dear God. I am fourteen years old. I have always been a good girl.

Some other differences between the 4/12/85 draft and the completed film:

The film rearranges the events of the story’s last act, after Celie leaves Mister. A scene of Shug and Celie quarreling because Shug is going out with a young musician is omitted from the film. The events constituting the redemption of Mister have been streamlined and condensed, including the complete omission of a scene showing the older Celie and Mister sitting together on a porch, her sewing pants, him smoking a pipe. An “Alternate Scene” printed on blue paper, showing the older, confused Mister getting lost in a fog, was apparently never shot.

The screenplay is still titled MOON SONG–so that actors who read for parts in the project wouldn’t know they were reading for a film based on THE COLOR PURPLE. There is an added scene in the third draft where one of Mister’s young sons, Bubba, is taken away in handcuffs by the sheriff. In voiceover, Celie quotes Mister saying, “Bubba a bad seed that I tried to raise as best I could . . . .” (The scene of Bubba’s arrest does not appear in the completed film.)

The third draft adds a scene in which young Celie is following a train, and a black Pullman waiter on the train throws some gold coins at her which turn out to be pieces of chocolate wrapped in gold foil. Later in the draft, we see Celie in her forties, well- dressed and riding a similar train. The movie conflates these two scenes–there is no scene of young Celie following the train, but we do get a scene in the film of older well- dressed Celie on the train throwing gold foil-wrapped chocolates at a young black girl following the train.

This draft adds a touch to the scene where Shug attempts to talk to her estranged father, the Preacher, in his church. In this draft, there is a 16mm movie projector showing a “black western” on a hanging white sheet. This seems very much like a Spielberg idea, but it does not appear in the completed film.

In one third draft scene, Mister gives advice to his son, Harpo, on how to have the upper hand in his marriage to Sofia, “Nothing can do it better than a good sound beating.” Celie, who at this point has internalized the ideology of masculine violence, gives Harpo the same advice, “Beat her.” The completed film keeps the scene with Celie and Harpo, but leaves out the earlier scene with Harpo and his father.

The third draft adds a scene (not in the movie) where Celie builds a scarecrow and talks back to it, “Ain’t you gon’ order me around some?”

A black cat (reminiscent of one of Walt Disney’s evil cats) that guards the mailbox, preventing Celie from retrieving Nettie’s letters, is omitted from the completed film. Also omitted from the film is a scene of 14-year-old Nettie, on an ocean liner to Africa, tearing up some of her letters to Celie and throwing them in the water to “send them to you o the waves.”

The movie’s language is more PG-rated than in the screenplay drafts. Words like “bitch” and “fuck” that appear throughout the drafts are not heard in the movie, though the film was, in fact, rated PG-13 for its suggestions of incest and lesbianism.

The 5/31/85 revised third draft is the first draft of THE COLOR PURPLE to include the opening scene that appears in the completed film, showing young Celie and her sister Nettie playing patty cake in a field of beautiful purple flowers.

In this draft, still entitled MOON SONG, the two scenes of Mister asking Pa for Nettie’s hand in marriage and getting Celie instead, are condensed into one scene.

The revised third draft is the first draft to include scenes of Nettie teaching Celie to read with the aid of Dickens’ Oliver Twist (Celie reads it out loud very awkwardly at first; then we cut to a scene of her reading the same passage more fluently). This is also the first draft that tells us Shug Avery is coming to town, as the film does, by showing a printed flier for her band blowing in the wind.

The revised third draft is the first to include one of Shug’s most memorable lines, when Celie is bathing Shug, and Shug starts to talk about her estranged father, the Preacher, “My Pa still love me, ‘cept he don’t know it.”

This is the last draft to include the elaborate comic scene of the three male suitors who come to court Shug at Mister’s house while she is sick and being cared for by Mister and Celie. That scene is omitted from the completed film.

The scene where Celie and Shug find the letters from Nettie that Mister has been hiding from her has been reimagined in the film. In this and earlier drafts, the women find the letters hidden underneath the false bottom of a trunk. In the film, Celie sees a spider crawl out from a hole in a floorboard, inspiring her to look underneath that floorboard. A major difference occurs in the dinner table scene where Celie announces to Mister that she is leaving with Shug. In the movie, not in the script drafts, Spielberg allowed Oprah Winfrey as Sofia, reacting to and encouraged by Celie’s defiance, to improvise a monologue summing up all of Sofia’s anger and frustration over the years. Oprah more than rises to the occasion, and it is one of the film’s highlights.

Another key moment in the film is the scene where Shug is performing for the first time at Harpo’s “jook joint” and introduces the song, “Miss Celie’s Blues,” a woman-to- woman love song dedicated to Celie. In every draft up to this point, including this one, Shug says that the tune (actually composed by producer Quincy Jones) was something that Celie used to sing to her “when I was ailing,” but in the movie Shug says it was something that Celie “scratched out of my head” while Celie was combing Shug’s hair.

The lyrics, which do not appear in this draft, begin with the word “Sister,” giving the song a double meaning–it is not only an expression of Shug’s love for Celie, but also reminds us of Celie’s transcendent love for her lost sister Nettie, one of THE COLOR PURPLE’s most powerful themes.