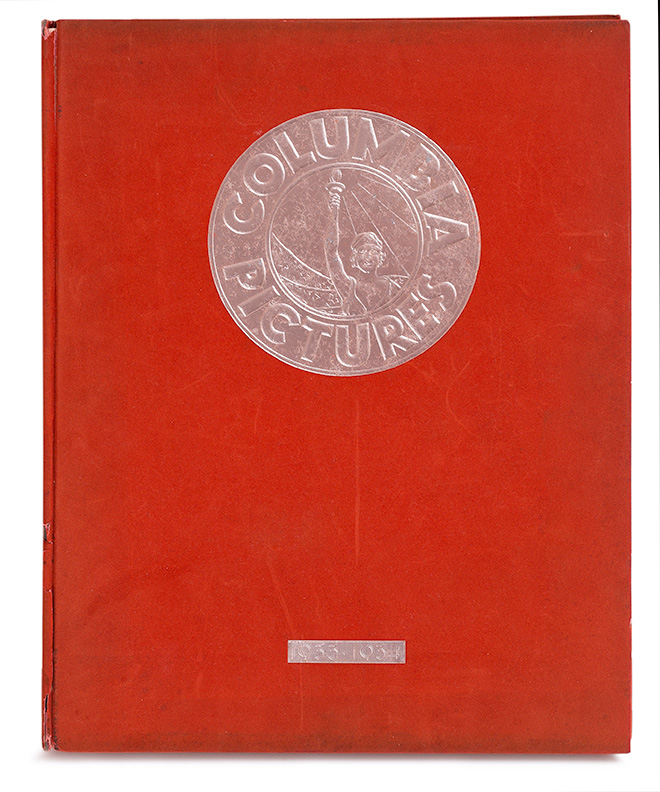 Folio, orange boards, with embossed Columbia Pictures seal and 1933-1934 notation both in silver foil on front, about 90 pp., some rubbing and spine wear to covers, internally in virtually immaculate condition, just about fine in very good binding.

An extremely impressive book, with a plethora of double-page plates, all in very rich, dramatic colors, and with the typical kinds of sexually suggestive illustration characteristic of the pre-Code era, which would abruptly come to an end a year later. Columbia’s fortunes had greatly improved since the silent era, and this book reflects the higher levels both of ambition and of self-confidence at the studio. That self-confidence would soon be justified several months later, when their release of IT HAPPENED ONE NIGHT, by Frank Capra, one of their leading contract directors, became a massive commercial and critical success (and, subsequently, a huge winner at the Academy Awards ceremony). There is a single page devoted to Walt Disney and Mickey Mouse (Disney was then being distributed at Columbia; this is a very rare early image of Mickey Mouse in color.)

Among the many remarkable double-page, richly colored trade ads (all of them about 14 x 22”, or 36 x 54 cm.: Frank Capra’s LADY FOR A DAY; THE 9TH GUEST; SHADOWS OF SING SING; horror classic BLACK MOON; pre-Code movie THE HELL CAT; 20TH CENTURY; MAN’S CASTLE; HELL BIG BOY (with distinctive artwork, unsigned, but clearly by John Held, Jr.; film got released as LADY BY CHOICE); and a double-page spread devoted to Carole Lombard, who was just emerging as a major film actress.