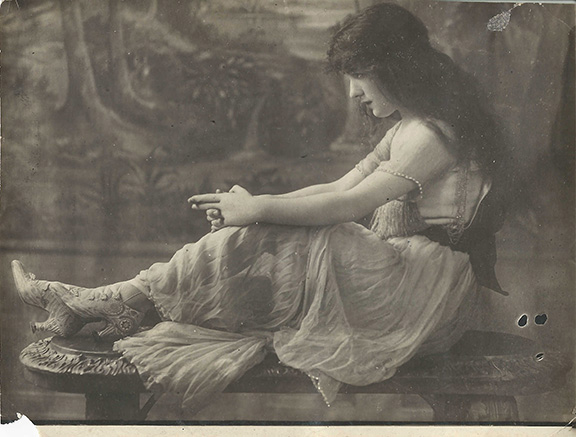 Vintage original 4 ¾ x 7” (12 x 17 cm.) black and white single weight glossy silver gelatin print still photo, USA. Known as “the girl in the red velvet swing” and for the notorious scandal in which her husband her Kendall Thaw killed her lover Stanford White, here is a lovely cabinet size study of the beautiful actress, chorus girl, photographer’s model. Nesbit, considered one of the most beautiful women of her time had been known for various love affairs including one with young John Barrymore. Pressured into marriage by the controlling Thaw, she continued outside relationships including that with known architect and playboy Stanford White. In a jealous rage, Thaw shot White and this lead to what was called “The Trial of the Century.” During her affair with White, between 1900 and 1905, Nesbit who was just 16 at the start of the relationship and whose mother controlled her became the most popular photographer’s model of the time. This portrait was taken at the time photographer Otto Sarony was known to photograph her. The botton left corner has chipped off. There is an emulsion scrape near the top right corner and overall waviness to the print. The top and left borders may have been trimmed. VERY GOOD-FINE.