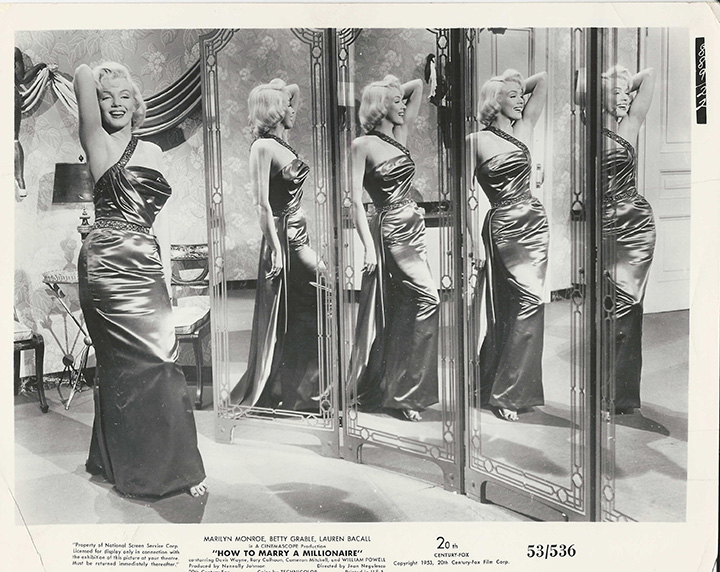 HOW TO MARRY A MILLIONAIRE (1953) Marilyn Monroe in mirrors

Vintage original 8 x 10” (20 x 25 cm.) black and white single weight glossy silver gelatin print still photo, USA. Betty Grable, Marilyn Monroe, Lauren Bacall, David Wayne, Rory Calhoun, Cameron Mitchell, William Powell, Fred Clark, dir: Jean Negulesco; Twentieth Century Fox. One of the most delightful of 1950’s comedies. Marilyn Monroe was publicized the most in the campaign for this movie. She was the NEW star. Betty Grable, top blonde female star of the 1940s was originally top billed (the studio second billed her when she informed them that she would not be honoring the last five years on her contract) but it was time to turn the “Fox” blond torch over to the new blond. Lauren Bacall, her career well established in the noir films of the 1940s, rounded out the trio of three models, without a dime amongst them, who sublet an expensive apartment so as they can impress potential wealthy men for marrying. The story of show biz gold diggers was an old one, but never fails to please.  It was the first film to be released with Stereo sound and also the first to be filmed in the new Cinemascope format. This image is just one indication of director Jean Negulesco’s brilliant instant grasp of the new wide screen format. We are treated to five Marilyn Monroe’s at one time as she poses in the swank restaurant’s ladies powder room. As comical character Pola Debevoise she would with perfect comedy timing next bump into the door believing that men do not makes passes to girls who wear glasses. Minor corner creases, bottom right corner chipped. Crease to left bottom corner has been re-enforce with scotch tape. NEAR FINE.