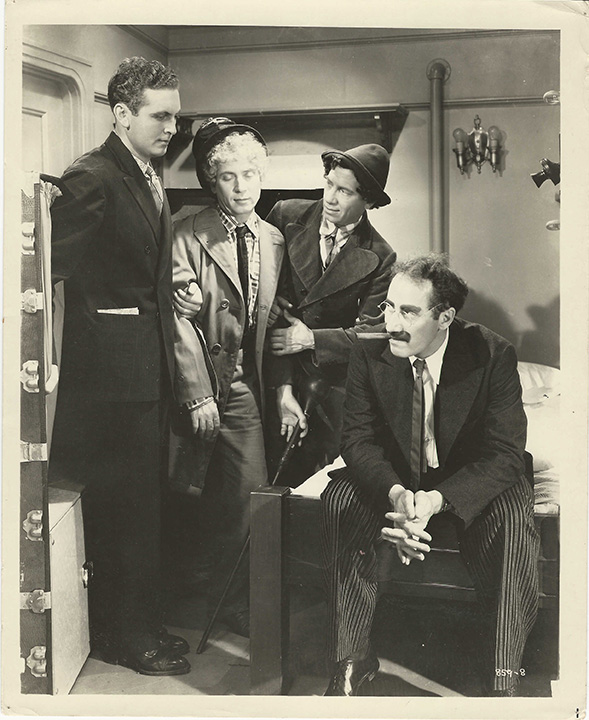 MARX BROTHERS IN NIGHT AT THE OPERA/STATE ROOM SCENE (1935)

Vintage original 10 x 8” (25 x 20 cm.) black and white single weight glossy silver gelatin print still photo, USA. Groucho Marx, Chico Marx, Harpo Marx, Kitty Carlisle, Allan Jones, Margaret Dumont, dir: Sam Wood; MGM. This was the first of 6 films which the Brothers made for MGM after Irving Thalberg won them over from Paramount. It was the only one of their films which Irving Thalberg was able to oversee. He would die before their next film was finished. This would prove to be the finest of their MGM endeavors. Much of this was due not only to the Marx’s brand of madcap humor (they “showcased” much of the script in a series of live shows prior to filming), but because of the witticism of George S. Kaufman and Morrie Ryskind. With their hilarious lampooning of the world of opera, it is likely the Marx’s most accessible signature work. A three minute opening musical number was cut from the film for the 1948 re-release, as it referred to Italy, a taboo subject during and just after World War II. Thus far that sequence has not been found. The brother’s most famous routine in the film was that in which everyone shows up at one time in their closet sized state room aboard ship. Here are Harpo (in a sleeping coma), Chico and Groucho with Allan Jones in photo 859-8. Minor boarder creasing. ABOUT FINE.