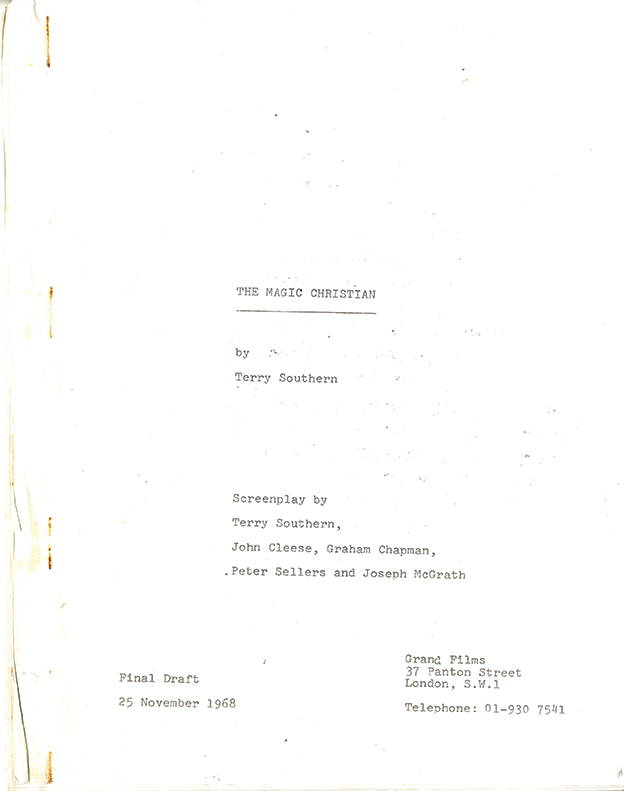 A zany British comedy wherein a homeless hobo (Ringo Starr) is adopted by the world’s richest man, Sir Guy Grand (Peter Sellers). Setting sail on the luxury liner The Magic Christian, Sir Grand tests the limit of human avarice. Wilfred Hyde White is the drunken captain, Yul Brynner is uncredited in his performance as a chanteuse transvestite, John Cleese is the director of Sotheby’s auction house, and Roman Polanski, Richard Attenborough, and Raquel Welch also make cameo appearances. Paul McCartney wrote and produced “Come and Get It”, the first international hit from the power-pop group Badfinger, for the film.

In the tradition of his screenplay for the 1965 film, THE LOVED ONE – advertised as “The Motion Picture with Something to Offend Everyone!” – Terry Southern’s screenplay for THE MAGIC CHRISTIAN, co-authored by John Cleese, Graham Chapman, Peter Sellers and director Joseph McGrath, and based on Southern’s blackly comic 1959 novel of the same name, goes out of its way to smash the boundaries of good taste and bourgeois decorum, aiming its satire at a wide array of targets, but in particular, at capitalism and greed.

Like the novel itself, the screenplay and film present a series of comic vignettes, climaxing with an extended episode aboard a luxury ocean liner called The Magic Christian, where the high-paying upper class passengers are subjected to an escalating succession of humiliations, indignities, and disasters orchestrated by a billionaire practical joker by the name of Guy Grand. In the screenplay and film, which transpose the action from America to Great Britain, he is dubbed Sir Guy Grand (played by Peter Sellers), and he is joined by a hippie accomplice, Youngman Grand (played by Ringo Starr).

The completed film generally follows this screenplay by Southern et al., but with a great many trims and additions. Clearly, much was elaborated on in the course of shooting, and the elaborations are very much in the style of the film’s Scottish-born director and co-writer, Joseph McGrath, who had previously established himself as a distinctive pop visual stylist and comedy auteur in films like THE BLISS OF MRS. BLOSSOM (1968), and the Peter Sellers sequences of 1967’s CASINO ROYALE (on which he shares credit with four other named directors).

For example, both the screenplay and the film of THE MAGIC CHRISTIAN begin by cross-cutting between Sir Guy waking up in his posh surroundings and Youngman waking up in a park having spent the night there in a sleeping bag. This sequence concludes with Guy meeting Youngman and adopting him as his son. However, in the movie, this opening sequence is preceded by an elaborate prologue wherein we hear a choral rendition of “God save the Queen” playing over a portrait of the Queen, which pulls back to reveal it is her picture on a 10-pound note. Then we hear Sellers as Guy Grand speaking the following:

Ladies and Gentlemen, this is what is commonly known as “money”. It comes in all sizes, colors and denominations, like people. We’ll be using quite a bit of it in the next two hours. Luckily, I have enough for all us.

After the scene of Guy adopting Youngman, the next big scene is the two of them attending a performance of Hamlet. However, the movie adds a transition scene of the two of them debarking from a helicopter wearing tuxedos.

YOUNGMAN: “Thanks for the new suit.”

GUY: “One has to be smart when observing the effects of money on the arts and Mr. and Mrs. First Nighter.”

The central gag of the Hamlet sequence is that Hamlet appalls the audience by performing a striptease while speaking the “To be or not to be” soliloquy. Typically, for the way the screenplay was filmed, the dialogue between Guy and others watching the play has been trimmed, while the visuals have been elaborated in characteristic pop McGrathian fashion, i.e,. after Hamlet strips, he is carried up a stairway by the cast, with each step lighting up in a garish color as it is stepped on, and when he arrives at the top, a giant comic-book arrow descends to meet him illuminated by the word “ZAP“. Also not indicated in the screenplay, the stripping Hamlet is played by Laurence Harvey, the first of several celebrity cameos sprinkled throughout the film. And so it goes for the remainder of the movie.

One of the screenplay and film’s chief targets is homophopia. The stripping Hamlet scene, for example, plays on the audience’s discomfort with an eroticized male. The “exclusive” passengers on the S.S. Magic Christian are forced to watch a floor show featuring an uncomfortably slow pas de deux performed by two oiled up male weightlifters. Finally, during that same disastrous ocean voyage, a bar customer played by Roman Polanski in a cameo is serenaded by a woman singing “Mad About the Boy” who removes her wig to reveal herself as Yul Brynner in drag (These celebrity cameos are also not indicated in the screenplay. Nor are cameos specially conceived for Christopher Lee and Raquel Welch. However, the screenplay does have a four-page celebrity cameo – not included in the film! – involving former Terry Southern collaborator, Stanley Kubrick).

But the screenplay and film never veer too far from their chief target – greed. The last scene, following the extended ocean liner sequence, involves a large pit filled with blood, urine, excrement, and finally – money. Various well-dressed executive types are seen wading chest-deep through the disgusting bodily waste to pick up as many stray bills as they can. This scene, like many of the screenplay’s episodes, comes directly from Southern’s book.

Notwithstanding contributions from Monty Python members, Graham Chapman and John Cleese, the movie version of THE MAGIC CHRISTIAN is clearly a product of three principal auteurs, Terry Southern (dialogue and situations), Joseph McGrath (visual style/visual gags), and writer/star Peter Sellers (performance). Apart from the visual gags and celebrity cameos added to the film, the screenplay differs from the movie by containing a larger portion of choice Terry Southern-style dialogue scenes than there were room for in the completed film. Here, for example, is a brief scene not included in the film involving two attractive young women in a TV soap opera:

Tell me, darling, do you plan to breastfeed your baby?

Oh really, Meg! That’s hardly my idea of what breasts are for!