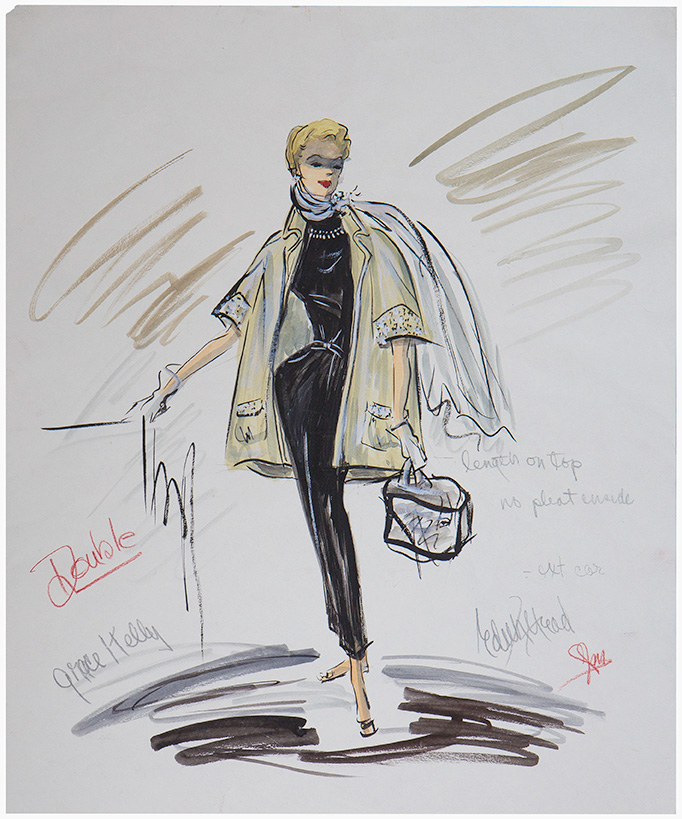 Vintage original 14 x 17” (35 x 42) sketch accomplished in ink, gouache and pencil on artist’s paper, USA. Cary Grant, Grace Kelly, Jessie Royce Landis, John Williams, Charles Vanel, dir: Alfred Hitchcock; Paramount. Wonderfully romantic and suspenseful Hitchcock classic about a reformed jewel thief (Cary Grant as John Robie) who is suspected of returning to his former occupation when a wave of thefts occur on the Riviera. A copycat cat burglar is on the prowl and it is up to John to clear himself and discover who it is. Technicolor, Vista Vision, location shooting in France, and Grace Kelly enhanced the viewing pleasure. Kelly’s beauty was enhanced by her wardrobe and gowns designed by Edith Head. This black ensemble with swing coat and scarf was likely designed for (as indicated on the sketch) a scene in which Kelly is stops in her car on an exterior set and has a conversation with Cary Grant. The term double may refer that this costume is an alternate or back up to the final design for the film. The term Double is also written on the back. Edith Head was nominated for the Academy Award for Best Costume Design, Color for this film. Minor use, tiny chip at top left corner. ABOUT FINE.