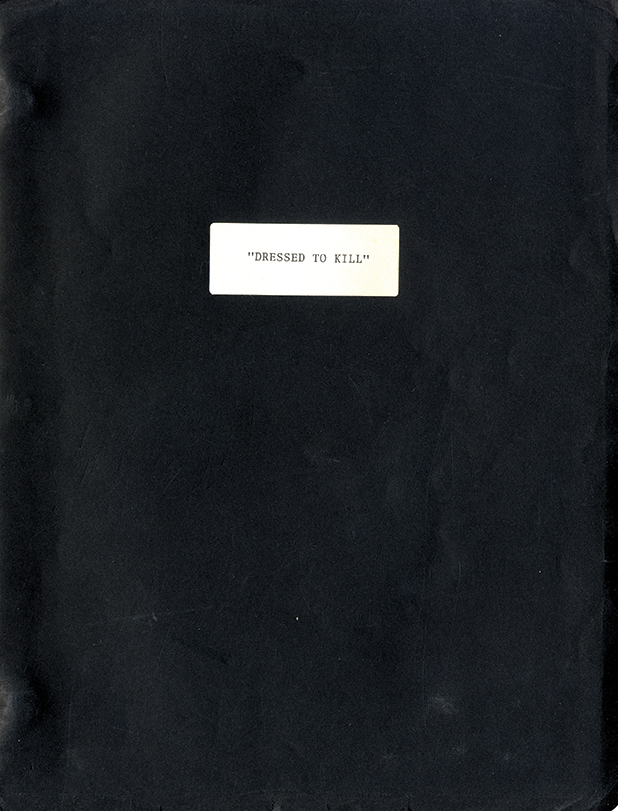 A defining De Palma film, suspenseful in the vein of Alfred Hitchcock and intense sexuality. The film begins with a very famous update on the “Hitchcock shower scene”, with Angie Dickinson very plausibly filling Janet Leigh’s role. The sixth of nine highly distinctive films De Palma made between 1973 and 1984. Based on other drafts we have seen, this one would precede October 1979 (and the commencement of production).

DRESSED TO KILL was the thirteenth feature film directed by Brian De Palma (born September 11, 1940, Newark, New Jersey), and, like many of them, was based on an original screenplay by De Palma.

A number of the changes between the screenplay of DRESSED TO KILL and the completed film arose from the fortuitous casting of Angie Dickinson in the key role of Kate Miller. In the screenplay, the character of “Kate Myers” (changed to Miller in the film) is described as “an attractive housewife in her mid-thirties”.

De Palma’s chief acknowledged influences as a filmmaker were Jean-Luc Godard and Alfred Hitchcock, and DRESSED TO KILL “borrows” from Hitchcock’s 1960 classic PSYCHO in a number of significant ways. Just as in PSYCHO, we are introduced to a heroine/identification figure (played by Janet Leigh), who is murdered approximately one third of the way into the film, completely disorienting the audience, in DRESSED TO KILL our principal identification figure, played by Ms. Dickinson, is also murdered roughly one third of the way through the film. As in PSYCHO, the murderer (spoiler alert) is revealed to be a man wearing women’s clothes. There is a scene where Ms. Dickinson is stalked in an art museum that echoes the fairground stalking sequence in Hitchcock’s STRANGERS ON A TRAIN (1951).

However, it must be stressed that De Palma does not simply “steal” from Hitchcock. He develops and elaborates upon Hitchcockian narrative strategies for his own purposes. For example, the art museum stalking sequence in DRESSED TO KILL doesn’t merely repeat what Hitchcock did in STRANGERS ON A TRAIN. It is a tour-de-force set piece of filmmaking in its own right. Sometimes, De Palma’s Hitchcockian homages are a deliberate bait-and-switch, leading knowledgeable film viewers to expect one outcome and surprising them with another. Some significant differences – PSYCHO took place mostly in a small California town; DRESSED TO KILL takes place in metropolitan New York City. PSYCHO treated its transgender issues obliquely (Norman Bates was just a boy who sometimes thought he was his own mother); DRESSED TO KILL is one of the first movies to feature a genuinely transsexual character (he is saving money for “the operation” which the film actually describes in some detail).

There are several significant differences between the DRESSED TO KILL screenplay and the completed movie. For example, the screenplay opens with what is essentially a castration fantasy – a man is shaving, “a straight razor trembling over naked pubic area” and then “jerks down below frame” as “blood streams down hairless thighs”. Apparently, De Palma shot this sequence (meant to be a dream or fantasy of the transsexual psychiatrist), but did not include it in the completed movie. The screenplay’s second sequence – the fantasy of Angie Dickinson’s character in the shower – is what opens the completed film.

Incidentally, the name of the psychiatrist (played by Michael Caine) changes from Dr. Bellnap in the screenplay to Dr. Elliott in the completed movie, so that in the movie, when a police officer asks Dr. Elliott to spell his name, he replies, “E-double L-I-O-double T”, underlining, in effect, his own double nature.

The most significant change occurs in the art museum stalking sequence. In the screenplay, the entire sequence is accompanied by Kate’s (the Dickinson character’s) thoughts in voiceover, thoughts like, “He’s got a lot of nerve trying to pick up a respectably dressed married woman in the middle of the morning – for God’s sake!” and “What’s the matter with me? He didn’t even look at me”. After the shooting of this sequence, when Dickinson asked De Palma when he wanted her to record the scripted narration, De Palma told her it wasn’t necessary, because all of the character’s thoughts would be effectively communicated through Dickinson’s performance, the music, and De Palma’s mise-en-scène.

De Palma’s screenplay does not read like a conventional film script. There is rarely any indication of how individual sequences will be broken down into shots, or indication of camera angles. There are times when the double-spaced scene descriptions read like a pornographic novel:

Somehow he manages to work her underpants off and down her legs to the cab floor. Then he gently sits her back up on the seat facing forward like nothing has happened. But something has happened. KATE can feel the cold leather of the seat pressing against her naked ass. Then he drops his head from the kiss and disappears under her skirt. When his warm tongue touches her deep inside she gasps…

De Palma has frequently been criticized for what some viewers interpret as misogyny. Yet many of the screenplays he wrote himself (SISTERS, FEMME FATALE, PASSION) have female protagonists and reflect a female point of view, almost as if he were – in the words of Dr. Elliott’s alter ego – “a girl inside a man’s body”.